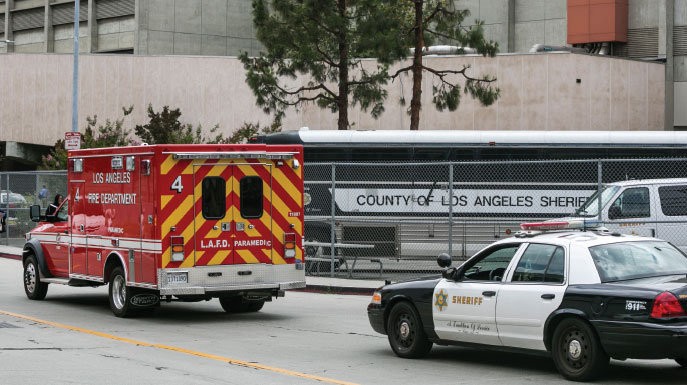 A new public safety broadband data network is poised to dramatically enhance law enforcement communications and radically improve policing overall. The system is being directed and managed under a joint powers authority called the Los Angeles Regional Interoperable Communications System (LA-RICS), and built by Motorola. LA-RICS will provide improved radio and broadband communication for the public safety providers of the greater Los Angeles region. The data network will go live in Los Angeles County by the end of September 2015, when it will serve all law enforcement, public safety and first responder data needs. This data network will be the first part of a new nationwide public safety broadband data network to be operated by the First Responder Network Authority, known as FirstNet. FirstNet has been obligated by Congress to take all actions necessary to ensure the building, deployment and operation of the network.

For years, law enforcement in the region have used commercial carriers for data communications. These commercial carrier networks were the transport for computer-aided dispatch calls for service, wants and warrants on people and license plates, field-based reporting, mapping directions to a location and many more critical applications. At the same time, the public have used these same carriers for their data needs (text, Internet, streaming video, mapping, etc.) and unfortunately, during major emergencies and disasters, officers often find themselves competing for the same data connection. Since law enforcement does not have priority on the carrier networks, officers found themselves unable to communicate when they needed it most.

Next Generation 9-1-1 solutions are in the works nationwide to convert 9-1-1 systems to Internet Protocol and deliver information from the public using more than voice calls. NG 9-1-1 will allow the public to share information with law enforcement in ways that will provide incredible improvements in situational awareness. For example, if a citizen snaps a picture of an active shooter, it can be sent via text from their smartphone to 9-1-1 over a commercial carrier. When law enforcement arrives on scene, officers will receive the picture over their dedicated private broadband network and will have a much better idea about who they are looking for. Even for robberies in progress, burglary calls, vandalisms, etc., a photo of a vehicle or suspect sent by text to law enforcement will let units respond more quickly, effectively and safely. A member of the public streaming a large public disturbance to law enforcement can help us understand the scope and actions of those involved. Text messages can even be sent when the public is unable to communicate verbally to law enforcement or a 9-1-1 dispatch center. Calltakers and dispatchers can then forward this information to command staff and to units in the field via private broadband data network to enhance the effectiveness and efficiency of law enforcement operations.

There is a problem with how the commercial carriers build their networks, because the goal will always be to earn a profit. This is completely understandable, but when it’s not profitable to build in backup power systems or redundant communication links, it presents a vulnerability to public safety as we have witnessed time and time again. In times when public safety needs to communicate the most, communication is at the most risk. For example, imagine if a major earthquake were to hit the West Coast and knock out commercial power for days. Public safety communications on a commercial carrier would be at great risk. The LA-RICS data network is being built to public safety grade so it’s there when needed most.

Finally, there’s a growing tension between the carriers’ network capacity and their need to generate sufficient revenue. As a result, carriers are moving public safety agencies from unlimited plans to pay based on usage plans, just like they did to you. This means that streaming too much video could cost an agency a fortune and limit the benefit of the broadband service overall. Or, if a mobile data computer (MDC) needs its operating system upgraded and it will take up too much bandwidth, all units may have to periodically have their computers upgraded, wasting valuable time away from the field. Another problem with this model is that an IT professional could be hindered from fixing a problem remotely that would have been possible with a large data transaction. Even fixed database updates, such as criminal information and maps could be cost prohibitive if a pay-per-use system is required.

The Los Angeles County Sheriff’s Department (LASD), a member of LA-RICS, is poised to take advantage of this network. The LASD will be testing smartphones that work on this new public safety broadband data network (FCC band 14). Potentially, these band 14 smartphones can replace MDCs in radio cars. Deputies will wear the smartphones on their person and computers in their cars will be replaced by touchscreen monitors that support two-way wireless Miracast technology, or something equivalent.

Wi-Fi certified Miracast is a solution for displaying multimedia between devices, without cables or a network connection. Users can view pictures from a smartphone on a big screen television, share a laptop screen with the conference room projector in real-time, and watch live programs from a home cable box on a tablet. Users do not have to be connected to a Wi-Fi network, as the ability to connect is inside Miracast-certified devices. This allows the smartphone screen to be replicated wirelessly on a large touchscreen monitor in the radio car, so deputies can see and use the applications on the phone (e.g. CAD, wants and warrants, report writing, etc.) with the device still attached to their side. Additionally, a large keyboard can be installed in the vehicle and connected to the phone via Bluetooth to make report writing in the car easier.

LASD plans to clear up the center console of its patrol cars by replacing its MDCs with a smartphone two-way Miracast solution. With more than 120 covered site points planned under LA-RICS, this is the first step toward building a nationwide broadband network for public safety.
PHOTO COURTESY LA-RICS

The smartphone two-way Miracast solution is significantly cheaper than a MDC and will allow LASD to remain in constant contact to ensure a great service to the community. With fewer radios/modems in a car, fewer antennas on a car, and therefore a reduction in vehicle installation services, LASD estimates a savings of about $7,000 per radio car. Currently, the only public safety broadband smartphones supporting band 14 are built by Elektrobit, Motorola and Sonim.

The LA-RICS broadband network will be an integral first step for public safety to get real-world operational experience with dedicated broadband capacity. It is seen as the first step toward the nationwide broadband network under development by First-Net. This smartphone solution will allow law enforcement across the nation to be more efficient and to better serve the public, all the while saving thousands, and in some cases millions of dollars.