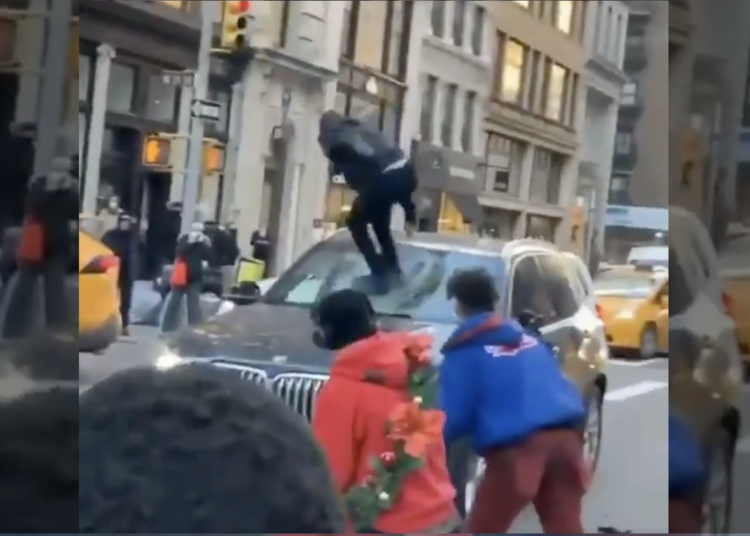 NEW YORK — A 15-year-old boy has been arrested in connection with the wild Tuesday attack on a BMW driver whose posh car was vandalized by a bicycle gang in broad daylight in Manhattan, the New York Post has learned.

The teen from Queens — who is not being identified because he’s a minor — is being charged as a juvenile after allegedly attacking Max Torgovnick’s luxury ride on Fifth Avenue, law enforcement sources said Wednesday.

The sources said approximately 25 bicyclists were involved, six of whom damaged Torgovnick’s car. Police have also identified another teen and are searching for him, the sources added.

Torgovnick told The Post Wednesday that he and his mother, who is in her 70s, had just dropped off a donation at a nonprofit organization and were heading to his father’s neurology office when they ran into around 50 teens on bikes Tuesday afternoon.

Video (see below) of the harrowing attack shows the bikers surrounding the BMW at Fifth Avenue and 21st Street, with some pounding the vehicle with their fists and feet, and another smashing a bike on Torgovnick’s windshield. 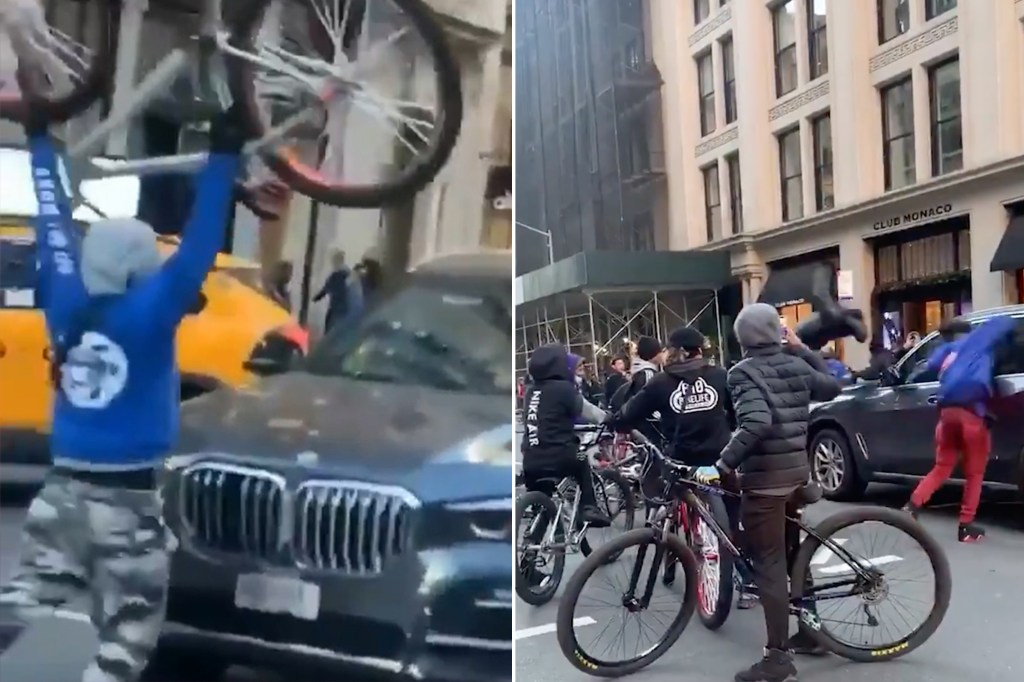 Stills from a video show a group of bicyclists attacking a BMW in NYC. (Twitter)

One of the attackers then ran against the car and vaulted on top of the hood, causing the windshield to crack and partially cave in, video shows.

“At that point, I was afraid that they were going to break the window, get in the car, reach in, and pull us out,” Torgovnick recalled.

His mother was frantically dialing 911 while screaming, “We’re going to die, they’re going to kill us,” Torgovnick said.

NEW YORK — A group of teens was caught on camera blocking traffic on a street in downtown Manhattan on Tuesday and maliciously attacking an SUV in broad daylight.

Actually, that is putting it nicely. The suspects acted like a pack of wild animals, pulverizing its prey to submission.

The Twitter account NY Actions on Tuesday afternoon posted back-to-back videos of the incident, which appeared to show dozens of teens on bicycles stopping traffic in the area of Fifth Avenue and 21st Street.

The juvenile suspects appeared to target one vehicle in particular: a 2019 BMW SUV, Fox News reported.

#NYPD need the public’s help identifying and locating any of the males seen in this video. The location of the incident was Fifth Avenue and East 21st Street in #Manhattan. pic.twitter.com/R4jcZx0uFj

The 36-year-old driver — who wasn’t identified — told police he had stopped at an intersection in the area to allow a large group of bicyclists to pass.

In another clip, posted from a separate Twitter account, another teen is seen repeatedly punching the side of the vehicle.

East 20s, #Manhattan, New York, earlier today. ~25 – 50 mixed-age teenagers on BMX bicycles descend onto the streets. Two grab onto a car driving by to catch a ride. The driver breaks & 1 of the bikers crashes into something, resulting in a bloody lip. Next is below. #FundPolice pic.twitter.com/qXowgJG9S4

Police told Fox News that they received a report that a vehicle had been damaged in the area of Fifth Avenue and East 21st Street around 4 p.m. but that the suspects fled the scene.

The driver told authorities that one bicyclist “came in contact” with his car. He has also refused medical attention, police said.