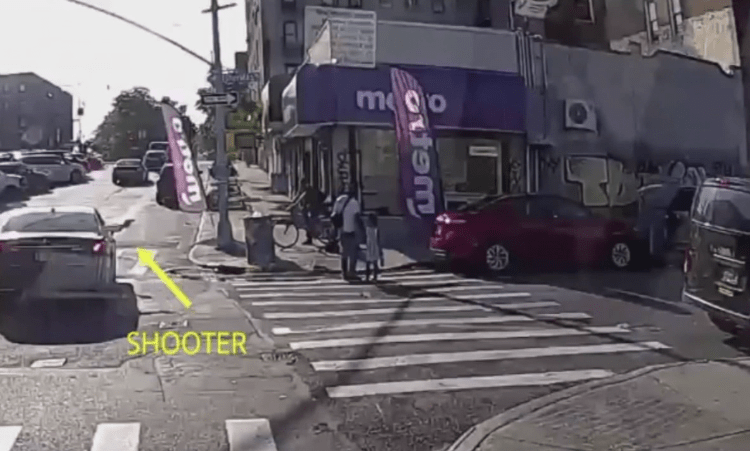 NEW YORK — New York City experienced another violent weekend that included 10 homicides on Sunday alone. Among the murders was a father who was gunned down Sunday crossing the street with his 6-year-old daughter in broad daylight.

New — Anthony Robinson shot and killed walking with a 6-year-old girl Sunday in Mount Eden, The Bronx. E 170 & Sheridan. Guy in backseat rolls down window and points the gun. Paused the video before he falls to the ground. The girl is (physically) ok. Call CrimeStoppers #abc7NY pic.twitter.com/O5ulg2fKbF

Video showed Anthony Robinson, 29, with his daughter on their way home to Brooklyn from the Bronx, according to local reports. Surveillance video shows a car pull up alongside them and open fire. The girl runs while Robinson collapses onto the street. He was pronounced dead at a nearby hospital, WABC reported. The girl was unharmed.

Police unions have blamed the spike in crime on Mayor Bill de Blasio and Council Speaker Corey Johnson, who last week passed an annual budget that shifted about $1 billion away from the NYPD, a move aimed at meeting activists’ demands for police reform, FOX News reported.

“Criminals with guns fear no consequences,” the Police Benevolent Association tweeted, adding that the mayor, speaker “and all electeds” “owe their constituents an explanation.”

Law Officer is the only major law enforcement publication and website owned and operated by law enforcement. This unique facet makes Law Officer much more than just a publishing company but is a true advocate for the profession.
Share—and speak up for law & order...
Tags: Anthony RobinsonCorey JohnsonDermot SheaJason Wilcoxmurder in broad daylightnypd

NYPD Officer Shot In The Back At Domestic Violence Call