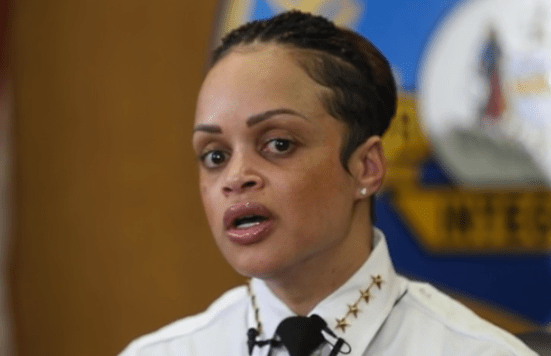 PHILADELPHIA – Danielle Outlaw, who took over Monday as Philadelphia’s new police commissioner, said the nail polish she wore this week had been among the last things on her mind on her first day on the job.

Nevertheless, people kept pointing out that her black nail polish technically violated department policy, as she was making the rounds to introduce herself to officers.

So in one of her first official actions as the new police commissioner, Outlaw changed the rule to allow for more stylish nails. And during an interview Wednesday, the first black woman to lead the 6,500-member department — said that although the action might have seemed narrow, it reflects the type of broader change she believes is needed in policing, The Philadelphia Inquirer reported.

“It’s the small things that allow us to feel not only welcome but supported,” she said. “It’s one thing to recruit me and say, ‘Oh yes, we want you.’ But if there’s no support system in place to say, ‘Not only do [we] want you, but we celebrate you and we recognize that you bring [something] different,’ … we’re not going to get the people that we say that we want.”

Outlaw, 43, is a native of Oakland, Calif. She served on that city’s department for two decades before spending the last two years as the chief of police in Portland, Ore.

Friends and colleagues in her hometown have described her as unapologetic and unconventional, and during Wednesday’s 25-minute interview, Outlaw made clear she had distinct views on her profession.

She said minority communities have deeply rooted mistrust of police because the profession was conceived as slave patrols — groups who sought to control the behavior and movements of slaves — and added that “in some places, [police departments] might further that institutionalized and systemic racism that many people have experienced.”

But she also said most cops today “have nothing to do with” the actions of the past, and said they sign up for the job out of a genuine desire to serve, according to The Inquirer.

“The only way, I think, to get beyond [the mistrust] is to allow community to see us,” she said, adding that it required building trust in neighborhoods and “not solely based around enforcement.”

Still, Outlaw did not reveal her plans and declined to comment on methods for combating the city’s ongoing violence.

She said she has been digesting a host of materials she requested before she arrived, including biographies of current department leaders, crime statistics for the last three years, and reports on the department’s technology infrastructure.

Outlaw is aware that she has much on her plate.

“It takes a lot to turn a ship, and turn the tide,” she said, “but it certainly can be done.”

You can watch the interview here.