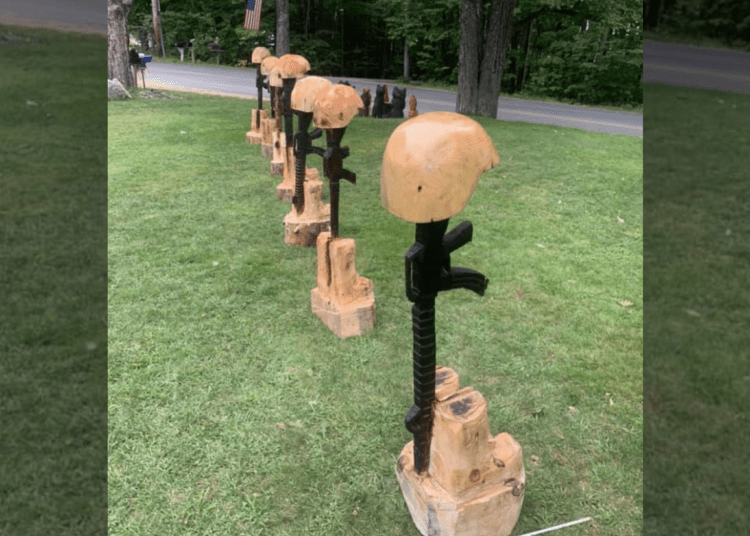 GILFORD, N.H. — When suffering is great, some people have the ability to rise to the occasion and act in a meaningful manner. Stephen Wing is one of those individuals. He’s able to draw on his set of skills to offer a modicum of compassion in a tangible way.

His response to the recently fallen soldiers in Afghanistan is unique as he crafts one-of-a-kind memorial pieces for the families of the 13 service members who were killed last month, Western Journal reported.

The New Hampshire patriot owns Wings Custom Carvings, where he uses a chainsaw to create pretty much anything in wood. The business’ Facebook page says all you need to know about his spirit. “Have an idea that you want carved and we will do it” and “[n]othing we won’t attempt.”

Wing’s heart of compassion connected with his creative mind as he sought to identify the families of the soldiers killed in action and present them with a customized memorial piece of art.

“Let’s see if This works,” he posted on Aug. 28. “I am trying to reach out to the families of our most recent tragedy in Afghanistan. I would like to donate one of these carvings to all the thirteen family’s for our fallen soldiers It’s a long shot but share away please.”

With the help of social media connections, Wing was able to begin collecting contact information for the soldiers’ families.

Moreover, the wood sculptor kept followers updated through his Facebook page as he received names and started creating the memorial pieces, many of the photo updates also featuring his trusty canine companion, Bear.

According to Western Journal, Wing had confirmed over the weekend 15 recipients, families of the 13 soldiers he would be gifting the carvings to.

“I wanted to say thank you to everyone across the United States of America for coming together to try and make this happen for the families of our 13 most recent Fallen Soldiers,” he posted. “With out your help this would have been nearly impossible but I’m great full to announce out of the 13 families we are going to be able to get there battle cross to the following.” He then listed the name of each fallen soldier.

So many people were touched by Wing’s humanitarian gesture that they wanted to know if there was a way they could help defray the costs of the project.

“Now a lot of people are asking how to donate for shipping cost and to be honest I don’t even know yet have to price it all out Tuesday,” he shared on Sunday. “So if you would like to help you can contact me.

“If there is money left over from the donations to ship it will be divided between all of the families evenly. This is to help the families and let them know we stand with them and also grieve with them. Thanks for all of your help in this. Couldn’t have done it with out all of you.”