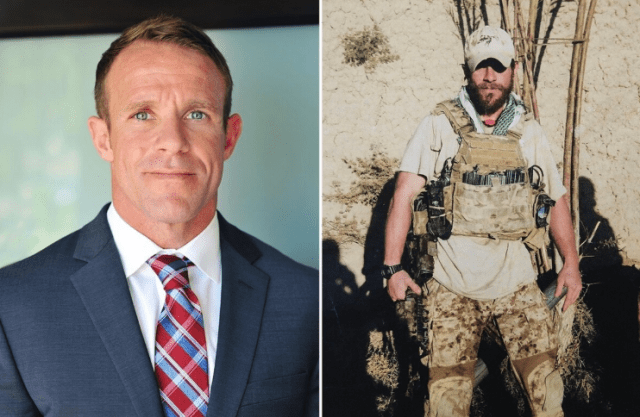 SAN DIEGO – Decorated Navy SEAL team leader Eddie Gallagher was found not guilty of premeditated murder in the death of an ISIS prisoner in Iraq in 2017, Fox News reported.

While Gallagher was serving Mosul in 2017, Navy prosecutors said he killed a young ISIS fighter who was being treated by US medics, posed for photos next to his corpse and them pressured other SEALs not to report him. Fellow SEALs testified that he also shot at noncombatants.

Gallagher was found not guilty of all but one charge, posing for a photo with a human casualty.

In total, the chief special warfare operator was accused of seven criminal counts: premeditated murder, willfully discharging a firearm to endanger human life, posing for a photo with a casualty, retaliation against members of his platoon for reporting his alleged actions, obstruction of justice, and the attempted murders of two noncombatants, a man in June 2017 and a young girl the next month.

Gallagher’s case took a dramatic turn before the trial even started when it was revealed in May that prosecutors had embedded email tracking software in their correspondence with Gallagher’s defense team. The revelation outraged lead defense attorney Timothy Parlatore, who told the Washington Examiner he would be filing an ethics complaint against lead Navy prosecutor Cmdr. Chris Czaplak. Navy Capt. Aaron Rugh, the judge overseeing the case, dismissed Czaplak over the revelations and released Gallagher from pre-trial custody. He also lowered Gallagher’s maximum possible sentence to life with the possibility of parole. He denied motions to dismiss the trial.

The trial started on June 17, with the prosecution presenting two witnesses who said they had seen Gallagher stab the injured teenager. Prosecutors showed the court pictures Gallagher had taken with the teen’s corpse. They said the chief bragged about the kill to fellow SEALs back home in text messages.

“Good story behind this. Got him with my hunting knife,” read one text Gallagher sent.

The testimony against Gallagher appeared damning, but the case took an unexpected turn when Special Warfare Operator 1st Class Corey Scott declared it was he — not Gallagher — who was responsible for the death of the injured teenage fighter. Scott admitted to seeing Gallagher stab the teen but said he himself asphyxiated the fighter in an effort to save him from Iraqi captors, who he had seen torture, rape, and kill other prisoners.

“I knew he was going to die anyway,” said Scott, a trained combat medic. “I wanted to save him from waking up to what had happened next.”

The shocking revelation caused a flustered Navy prosecutor to call Scott a liar. Navy officials later informed Scott through his lawyer that he may face perjury charges if he lied to investigators or during his testimony.

JUST IN: A seven-man military jury reached a verdict in the court-martial for Navy SEAL Chief Eddie Gallagher, finding him not guilty of murdering a wounded war prisoner in Iraq. https://t.co/xp9z9uHKg8

Parlatore and lead prosecutor Cmdr. Jeff Pietrzyk summed up the testimony in their closing arguments Monday.

Pietrzyk admitted that before being injured, the fighter “would have done anything in his power to kill an American.” But he noted that after his capture, the teen was no longer a lawful target.

“We’re not ISIS. When we capture someone and they’re out of the fight, that’s it. That’s where the line is drawn,” Pietrzyk said.

Parlatore reiterated his claim that the SEALs who made accusations against Gallagher were nothing more than disgruntled subordinates upset with Gallagher’s tough leadership style, Washington Examiner reported.

“This case is not about murder, it’s about mutiny,” Parlatore said.

With a verdict of not guilty, Gallagher will not need a pardon from Trump, who stated he would wait until the trials were over in the cases the White House was reviewing before rendering a decision. With Gallagher’s case over, attention will likely turn to the case of Army Maj. Mathew Golsteyn, who pleaded not guilty last week to a charge of premeditated murder for the killing of a suspected Taliban bomb-maker.