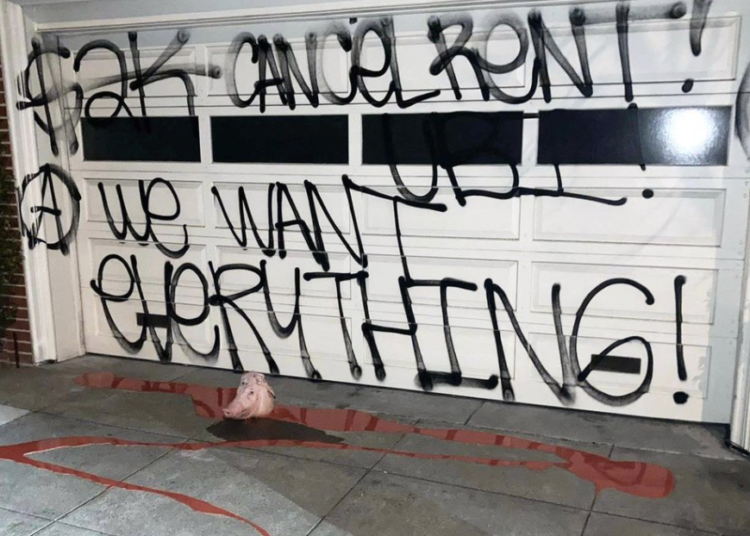 On Friday, photos surfaced on social media and TMZ showing graffiti on a San Francisco garage door purportedly at the home of the Democratic congressional leader. The apparently spray-painted message read “$2K” with a line through it.

“Cancel Rent?” “We want everything!” Another line appeared to read “UBI!” referring to the concept of universal basic income, Fox reported.

MORE: "Cancel rent!" and "We want everything!" was written on Speaker Pelosi's garage in big black letters.

A spokesman for the San Francisco Police Department told Fox News that officers responded to the reported vandalism around 2 a.m. Friday. “Unidentified suspect(s) had painted graffiti on the garage door and left a pig’s head on the sidewalk,” they said.

Police confirmed the scene was in the 2600 block of Broadway, but did not reveal who owned the home or if anyone was there at the time.

According to KRON, the messages have been covered up and fake blood on the ground was removed.

It’s unclear whether the police have any suspects, but the graffiti included two letter A’s with circles around them, the mark typically associated with anarchism.

Audrey Carlson has lived in this neighborhood for almost 40 years.

“It’s a fairly cowardly way to go about expressing your opinion,” Carlson said.

In September, people expressed outrage over Pelosi going to a San Francisco hair salon that should have been closed under stay at home orders.

This latest backlash now covered with black garbage bags appears to be over COVID-19 relief and the government failing to give out $2,000 stimulus checks.

“I don’t think that this is a useful way to go about it and it’s a terrible start to this new year when we’re hoping for less anger and hatred than we’ve had to deal with for the last year,” Carlson said.

The House Speaker’s office has not responded to KRON’s requests for comment.

The notion of UBI is being sought from militant groups, Law Officer reported.

Black Lives Matter said Thursday the stimulus payment included in the government’s most recent coronavirus relief package is far too little to support struggling families and is demanding monthly checks instead.