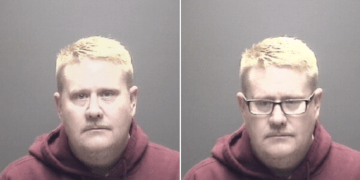 HOUSTON – A man wanted in connection with murdering his wife in La Marque was shot by a deputy Wednesday outside a Walmart in north Harris County, officials said.

The shooting occurred just before 8 p.m. in the parking lot of the Walmart at the intersection of North Freeway and West Road, Click2Houston reported.

Deputies were monitoring the store after receiving information from La Marque police about the location of a man wanted in connection with a homicide that happened there earlier in the day, according to Harris County Senior Deputy Thomas Gilliland.

Gilliland said that deputies saw the man walk out of the store and get into a vehicle that was driven by a person believed to be the man’s friend.

When deputies stopped the vehicle in the parking lot, the man exited the passenger’s side and pulled out a gun, Gilliland said. The suspect was ordered to drop the gun but refused and a sergeant with the Harris County Sheriff’s Office shot the man several times.

The man was taken to a hospital for treatment and is listed in critical condition, Gilliland said.

Gilliland said he was reluctant to release the man’s identity because of his condition, but sources have told Click2Houston that the man is 48-year-old Trent Paschal.

According to a news release posted on the La Marque Police Department Facebook page, Paschal is accused of shooting and killing his estranged wife, 30-year-old Savannah Paschal, at a home on Hawks View Drive about 12:15 p.m. and fleeing the scene in a gray Chevrolet Colorado. Police said that vehicle was later found in Houston.

Law Officer is the only major law enforcement publication and website owned and operated by law enforcement. This unique facet makes Law Officer much more than just a publishing company but is a true advocate for the profession.
Tags: Harris CountyHarris County Sheriff's OfficeLa Marque Police DepartmentSavannah PaschalThomas GillilandTrent Paschal