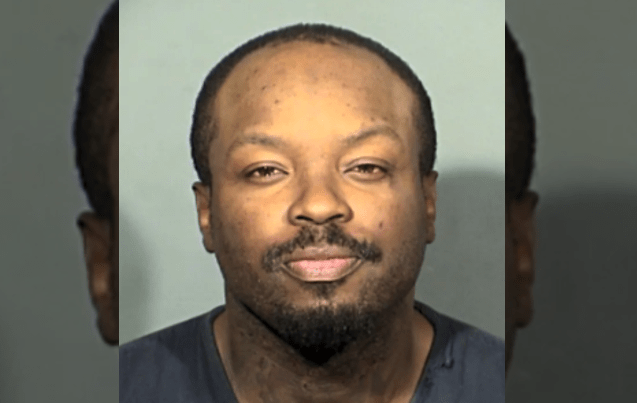 LAS VEGAS – Emanuel Beccles is accused of fatally stabbing another man at a bus stop in Las Vegas. He was unable to escape due to the actions of a security guard working nearby, according to reports.

Officers of the Las Vegas Metropolitan Police Department responded to reports of a stabbing at the location on South Maryland Parkway last week. Upon arrival they discovered a male victim suffering from multiple stab wounds, a press release states.

A nearby security guard reportedly detained the suspect, identified as Beccles, 31, until police arrived, the Las Vegas Review-Journal reported.

(Editor’s note: Reports of the security guard varied from differing news organizations. He was described as both “armed” and “unarmed.” He was also described as “off-duty,” in addition to working at a “nearby” restaurant as well as In-N-Out. Moreover, some reports said the stabbing occurred at the fast food restaurant, others said it occurred at the bus stop.)

A local CBS 8 reporter at the crime scene said the stabbing occurred at a bus stop near the University of Nevada, Las Vegas (UNLV) and an unarmed security officer working at In-N-Out burger ran over to detain the suspect until police arrived.

Security footage reportedly shows the security guard ordering the suspect to the ground.

EMS transported the victim to a nearby hospital where he succumbed to his wounds.

Beccles was riding the bus with the victim last Thursday night when they got into an argument. The confrontation escalated at the bus stop, which led to the fatal stabbing, according to investigators.

One witness said he yelled at Beccles to stop, but the suspect told him “to go away, or he would be next,” according to LVMPD’s arrest report released Monday.

The suspect reportedly told the security guard that the male, black victim in his late 50s, “deserved it,” according to the arrest report.

Beccles reportedly told the security officer that Durroh had “antagonized me on the bus.”

31-year-old Emanuel Beccles was arrested after a stabbing that left one person dead Thursday night near Maryland Pkwy and Harmon. Click here for more: https://t.co/saUXVxNUhL pic.twitter.com/BOuCxjvrXM

This wasn’t the first time Beccles committed a violent crime with a knife while riding a bus.

According to CBS 8, court documents indicate police arrested Beccles in February 2019 after pulling out a knife on a bus. A woman had called 911 saying he “[pulled] a knife on another passenger.”

“When the suspect noticed she was on the phone, he approached her, punched her and took her phone,” police said. Beccles also reportedly threw a rock at a bus window, breaking it.

Police later found an 8-inch kitchen knife in some bushes, they said.

Beccles pleaded guilty to a charge of assault with a deadly weapon. He merely received probation, a fine, and was ordered to stay off the bus and not to have any knives, records showed.

However, Beccles didn’t follow the court’s directives. Now he is charged with murder and is being held without bail in Clark County.