Ava Donegan helped an officer apply a tourniquet after he was wounded by a suspect who was fatally shot by police. 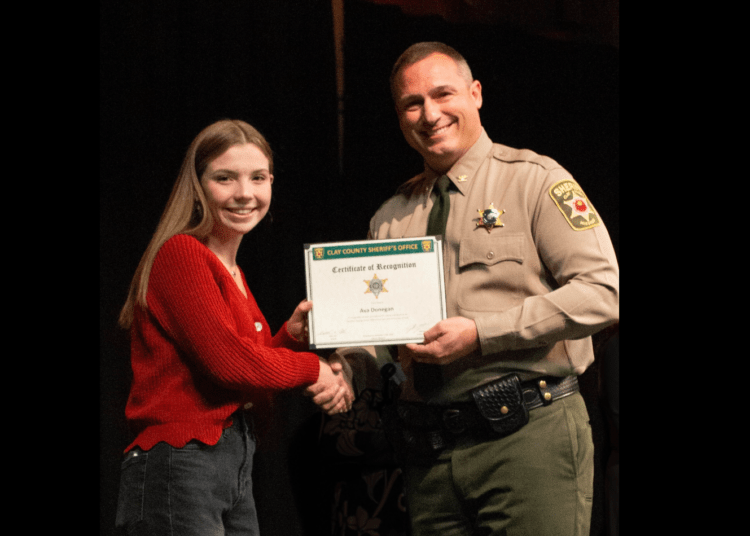 EXCELSIOR SPRINGS, Mo. — A high school girl in Missouri offered to help tie a tourniquet on an officer who was shot and seriously wounded in October. She was honored Thursday for her bravery, according to the Clay County Sheriff’s Office.

“When the officer said, ‘Can you help me with my tourniquet?’ I was like, ‘Absolutely, I can help you with your tourniquet.’ It was really useful to have that knowledge from my dad,” Ava Donegan, 17,  told reporters of the October incident when she jumped into action to help Excelsior Springs Officer Andrew Stott.

Donegan’s father is a critical care nurse who taught his family how to properly use a tourniquet, the Courier Tribune reported.

Stott was shot twice by a gunman as police tried to take him into custody for an arrest warrant. Donegan and her friend witnessed the event as they sat in traffic in Excelsior Springs on Oct. 1.

“Officer Stott ran to the vehicle Ava was in after he got shot. She did not know whether more bullets would fly, but she could see he needed help. He had been shot in the right arm and the left hand. Officer Stott pointed out where his tourniquet was on his outer carrier vest. Ava helped him retrieve it and put it on his wounded right arm,” the sheriff’s office posted on Facebook of the incident.

Stott was unable to use his police radio due to his wounds, so Donegan was able to notify dispatchers about the need for help, Fox News Digital reported.

“Ava and her friend had come to Excelsior Springs that day to go shopping. She had no obligation to help a law enforcement officer in a life-or-death situation, but she did. Ava also assisted the Sheriff’s Office in our investigation of the incident, providing information about what she witnessed,” the agency added on Facebook.

Donegan was honored Thursday with several awards and tokens of appreciation for her bravery, including the first-commissioned sheriff’s office challenge coin by Clay County Sheriff Will Akin, as well as a challenge coin by Excelsior Springs Police Chief Greg Dull. Excelsior Springs Mayor Sharon Powell also presented the high-school teen with a $2,000 scholarship provided by a local Ford dealership, Fox reported.

“I can only imagine how proud your family is. You don’t see citizens these days take the chance in life to make a difference. I have never met the officer you helped, but I can assure you, if he was my son, I would be so thankful you were there on that horrible day to help him,” Mike Anderson of the Chuck Anderson’s Excelsior Springs Ford dealership wrote in a letter that was read at the ceremony.

A humble Donegan said she was “grateful” for the recognition and awards.

“I still think anyone would have done it,” she said. “But I’m very grateful to be here.”

Following the shooting, Stott has undergone multiple surgical procedures and is expected to recover, the Courier Tribune reported.

The suspect in the shooting, Carl Carrel, was fatally shot by other police officers at the scene.

Ava Donegan, 17, a senior in high school, was one of the people who had a front row seat to the traumatic incident that occurred about 5 p.m. In fact, she was so close that a wounded Excelsior Springs police officer summoned her assistance to apply a tourniquet after he had been shot in the shoulder and wrist, KMBC reported.

Donegan was in the area to go shopping with her boyfriend. The two were waiting at a red light at the intersection of Route 10 and Corum Road. Suddenly, they found themselves in the middle of a major crime scene.

Two Excelsior Springs police officers tried to detain a driver who was wanted on a warrant for assaulting a law enforcement officer. The suspect opened fire, striking one of the officers in the shoulder and the wrist. The second officer returned fire, shooting the suspect in the head.

The gunman was identified as 64-year-old Carl Carrel. He died from his injuries, according to the news outlet.

“I saw the cop get out of the car and then I saw him get shot a few times,” Donegan recalled. “After that, we both ducked, and he started calling the police.”

Their vehicle was directly in front of Carrel’s truck at the intersection, KMBC reported.

“Somehow, I blinked my eye and the cop who was shot was right in front of my car. He was asking me to get out and help put his tourniquet on,” she said. “He told me that it was completely numb, and his hand was completely limp.”

Donegan said she offered assistance to the seriously wounded officer by helping him apply the tourniquet, remove his vest, and use his radio to summon assistance.

Donegan’s father is an ICU nurse. The teen has aspirations to go into pre-med, so she was familiar with tourniquets and how to apply them.

Prior to Saturday night’s dramatic encounter, Donegan said she had never heard gunshots before. Although the situation was frightening, she is glad that she was able to help.

According to KMBC, the unidentified officer had to undergo a second surgery Sunday. He is expected to be recover, although the long term prognosis is not immediately known.

“I’m just glad that he is okay. I think that gives me a good peace of mind,” Donegan concluded.