Chief Todd Axtell challenged the politician after looking into the accusation 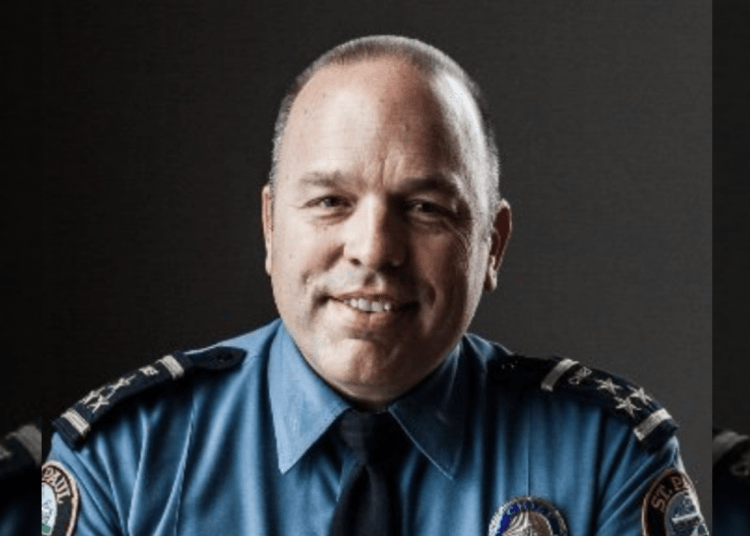 ST. PAUL, Minn. – Chief Todd Axtell of the St. Paul Police Department is demanding an apology from Rep. John Thompson (D-MN), after Thompson reportedly made a false accusation against a sergeant at his police department.

Rep. Thompson was apparently discovered driving with no front plates, a violation of Minnesota law. Moreover, he later admitted as much, which would give the police a valid reason to make a traffic stop, apart from his race, Post Millennial reported.

According to ABC 5 Eyewitness News, Thompson – who has a history of gaslighting law enforcement – offered the following comments during a Tuesday speech at a rally outside the Minnesota Governor’s residence:

“We’re still getting ‘driving while Black’ tickets in this state and in fact in St. Paul. So let’s just call it what it is, right…I shouldn’t have to be profiled, so this is ridiculous. Oh, and by the way, it was a sergeant here in St. Paul by the way. We promote bad behavior.”

Axtell looked into the situation and responded on Facebook, saying:

“These aren’t accusations I take lightly, so I looked into the traffic stop, watched the body worn camera footage and spoke to the sergeant. This stop, made at about 1:20 in the morning, had absolutely nothing to do with the driver’s race.”

“…. I’m dismayed and disappointed by the state representative’s response to the stop. Rather than taking responsibility for his own decisions and actions, he attempted to deflect, cast aspersions and deny any wrongdoing.”

“…. The driver, an elected official who does not dispute driving without a front license plate, owes our sergeant an apology.” 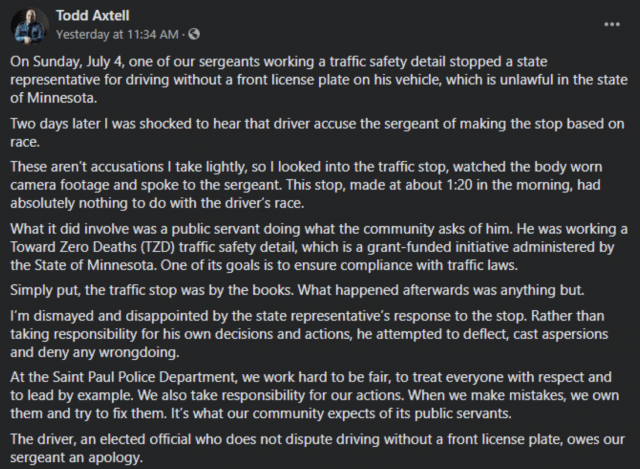 Video of the hostile event showed Thompson angrily shouting choice words into a microphone at neighbors who support police. Some of the clips also showed children nearby.