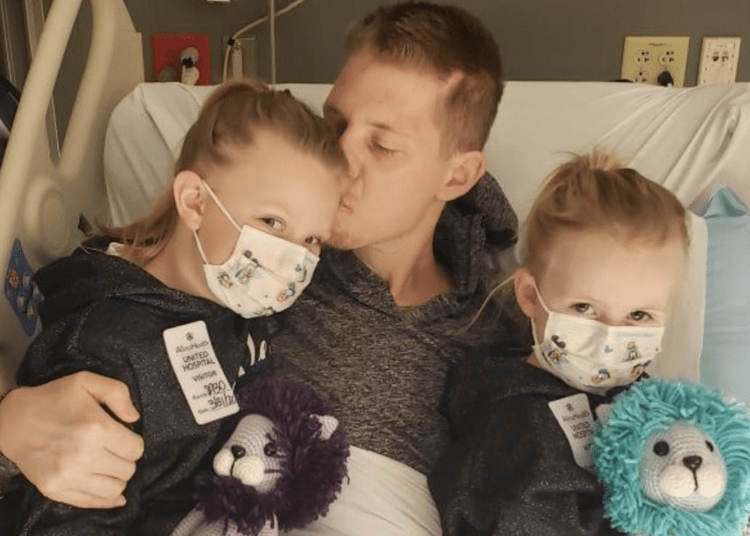 Arik Matson and his daughters Audrina, 7, left, and Maklynn, 5, at United Hospital in St. Paul late last month, shortly before he was moved to a different facility. (Matson family photo via StarTribune)

WASECA, Minn. – A Minnesota police officer suffered a severe gunshot wound to the head while pursuing a suspect in January. Now, the Waseca lawman has taken his first steps without help since suffering the traumatic injury.

Arik Matson, 32, took about 10 steps on his own last week. Moreover, this week he began working on stairs, according to his sister-in-law Nicole Matson, who on Thursday posted an update on the officer’s condition on his CaringBridge site.

“He’s walking longer distances with less assistance — still using various types of walkers — but his therapists are incredibly proud of the progress he’s making,” she wrote in the post. “Arik has been doing amazing.”

Arik Matson has been recovering at a Nebraska rehabilitation facility. The officer still suffers from some double vision in his left eye, but that is slowly improving, too, the post said.

In addition to daily therapy, Arik has been participating in a variety of activities, including CrossFit, weight training, basketball, baking cookies, and making gifts for his daughters, Audrina, 7, and Maklynn, 5. He also was able to do some fishing on the rehabilitation center’s on-site pond and caught some bluegills last week, the posting said.

“Staying busy throughout the day with different activities that he enjoys has certainly helped passed some of the alone time he’s experienced during the COVID-19 situation,” his sister-in-law wrote. “He’s been in better spirits and excited to see his family once they lift the Covid restrictions.”

Last week the Minnesota Vikings sent Matson some official team gear, which the officer loves showing off to his Nebraska caregivers, the StarTribune reported.

Tyler R. Janovsky, 37, is the man accused of shooting Matson. He was charged with three counts of first-degree attempted murder in connection with the Jan. 6 shooting.

Janovsky is not only accused of shooting Matson in the head during the foot pursuit, but firing at two of his partners as well — Sgt. Timothy Schroeder and Officer Andrew Harren.

Matson and Schroeder returned fire, striking Janovsky, but he survived the exchange of gunfire.

Janovsky remains jailed in lieu of $3 million bail and has another court date set for May 20.

Georgia police officer shot in head in 2018 returns to work