The dramatic rescue was captured on dashcam 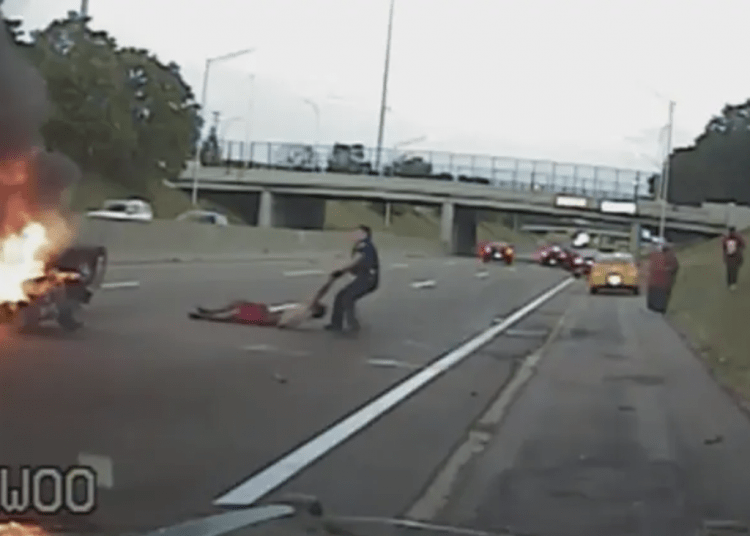 HARPER WOODS, Mich. — A police officer in Michigan is seen pulling an injured man from a fully engulfed vehicle on the highway, saving the victim’s life after a traumatic rollover collision caused the car to burst into flames.

Officer Luke Pauley of the Harper Woods Police Department runs up beside the vehicle already ablaze on Interstate 95 at Moross last Sunday, opens the front passenger door and rescues the man, FOX2 reported.

Dashcam video from another unit arriving on scene shows Pauley dragging the 23-year-old victim from the fiery vehicle to a place of safety on the side of the interstate.

The victim was reportedly in and out of consciousness, according to WDIV, but appeared unconscious during the rescue.

“As soon as I got out of my squad car, there was bunch of bystanders yelling at me that somebody was trapped, so my training just kicked in,” Pauley later told the news outlet. “Somehow he made it into the passenger seat of the vehicle – I don’t know if it was from the impact.”

“It looked like he was trying to get himself out of the vehicle, but he was unsuccessful at doing so,” the officer said, recalling how he found the victim going in and out of consciousness. “I reached my hand in because the outside door handle was locked, and I was able to unlock the door, and he pretty much just fell into my arms and that’s when I pulled him to safety.”

Once Pauley got the victim clear from the burning vehicle and to the side of the road, two nurses who were on scene offered medical assistance until the ambulance arrived, WDIV reported.

The victim was transported to a nearby hospital, according to FOX. His condition is unknown, although he was reportedly conscious when taken to the medical center.

“All I could think of was – perfect timing, glad we got here,” Pauley said. “I don’t think he would have made it. Timing was perfect. Somebody was looking out for him.”