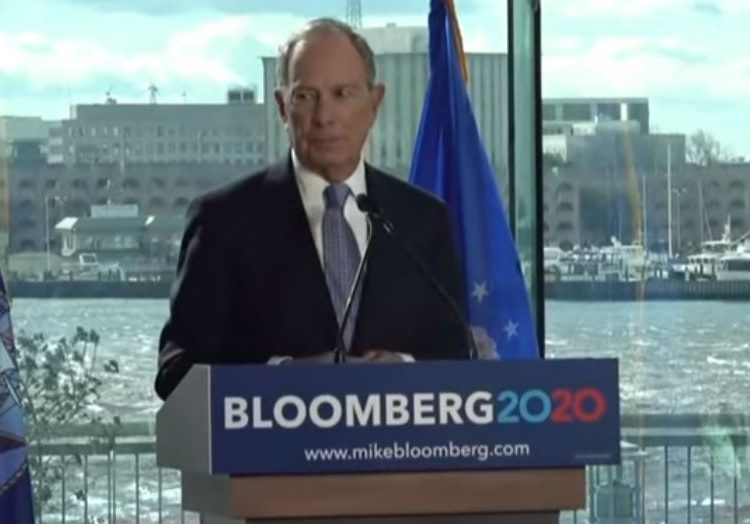 Presidential Candidate Michael Bloomberg is taking heat after a 2015 speech surfaced of him defending the controversial tactic of “Stop and Frisk.”

In the speech, the three term mayor of New York City gives a defense of the practice while a 2013 radio interview shows Bloomberg saying that police stop white people “too much” and minorities “too little.”

It didn’t take long for President Trump to pile on Bloomberg’s troubles with a Tuesday morning tweet saying: “WOW, BLOOMBERG IS A TOTAL RACIST!”

Jfc, and I thought the other clip was bad! ? #BloombergIsRacist pic.twitter.com/mkI5Y3vZ1U

The audio from 2015 was from a speech that Bloomberg gave to the Aspen Institute, where the billionaire acknowledged that “stop and frisk” targeted minority “kids” whom cops must throw “up against the wall” to disarm. The Aspen Times reported at the time that Bloomberg representatives asked the Institute not to distribute footage of his appearance.

“Ninety-five percent of murders- murderers and murder victims fit one M.O. You can just take a description, Xerox it, and pass it out to all the cops,” he said. “They are male, minorities, 16-25. That’s true in New York, that’s true in virtually every city (inaudible). And that’s where the real crime is. You’ve got to get the guns out of the hands of people that are getting killed.”

Bloomberg also said that crime-fighting required cities to “spend the money” and “put a lot of cops in the streets,” particularly in “minority neighborhoods,” where much of the crime resides and he he acknowledged the “unintended consequences” of that policy.

“So one of the unintended consequences is people say, ‘Oh my God, you are arresting kids for marijuana that are all minorities.’ Yes, that’s true. Why? Because we put all the cops in minority neighborhoods,” Bloomberg is heard saying on the recording. “Yes, that’s true. Why do we do it? Because that’s where all the crime is. And the way you get the guns out of the kids’ hands is to throw them up against the wall and frisk them… And then they start… ‘Oh I don’t want to get caught.’ So they don’t bring the gun. They still have a gun, but they leave it at home.”

In a statement released on Tuesday, Bloomberg said he “inherited the police practice of stop-and-frisk,” which he stressed he “cut” back by 95 percent by the time he left office, but admits he “should’ve done it faster and sooner” and that he has “taken responsibility for taking too long to understand the impact it had on Black and Latino communities.”

“But this issue and my comments about it do not reflect my commitment to criminal justice reform and racial equity,” Bloomberg continued. “I believe we need to end mass incarceration and during my tenure we reduced incarceration by 40% and juvenile confinement by more than 60%. We created the Young Men’s Initiative to help young men of color stay on track for success, which President Obama built on to create My Brother’s Keeper.  And we overhauled a school system that had been neglecting and underfunding schools in Black and Latino communities for too long.”

According to the ACLU, stop-and-frisk “was the signature public safety initiative during the 12 years that Michael Bloomberg was the mayor of New York City and Raymond Kelly served as commissioner of the NYPD. That initiative sparked a national controversy, cast a cloud over a time when murders fell to record lows, and became the central issue leading to the election of Bill de Blasio, who ran on a commitment to reform stop-and-frisk.”

But is the criticism on Bloomberg appropriate considering that the root of “Stop and Frisk” is a constitutionally valid police practice dating back to 1968 in the still standing United States Supreme Court case, “Terry V. Ohio?”

Travis Yates, author of “The Courageous Police Leader: A Survival Guide to Combating Cowards, Chaos & Lies” and lead trainer on “Seconds For Survival,” one of the most dynamic officer survival classes we have seen, says that “Stop and Frisk” has been completely butchered and abused by the media including politicians such as Bloomberg.

“The truth is that “Terry Stops” when done according to the guidelines set forth in the Supreme Court is not only constitutional but a sound law enforcement practice that continues to be labeled racist by the media and politicians that know little to nothing about it and it is that lack of knowledge that has Bloomberg fighting for his political relevancy of which much is his fault,” Yates told us.

Yates tells us that Bloomberg is correct on some of his talking points. “Terry Stops” specifically discuss high crime areas and the reasonable suspicion that someone may be committing a crime or carrying a weapon and at times, depending on the city, that could be in a predominant minority area but that doesn’t make the practice racist.

According to Yates, “the practice is racist if an officer does it outside what the law prescribes but since the political party that Bloomberg resides in has deemed every stop racist, he now gets to get eaten by his own and that is because instead of clearly describing the truth about “stop and frisk” he has spent a significant amount of time joining his colleagues and calling cops racist for often times just doing their jobs.”

We tend to agree. Politicians live off misinformation and they have told their audience that this entire practice should be removed despite the Supreme Court upholding it for more than 50 years.

Yates said that for for every stop to be racist, “we would have to believe that the United States Supreme Court that has been tilted both liberal and conservative over the last half decade was advocating for racist police behavior and that is almost as bad as believing the earth is flat.”

Yates concluded that “Bloomberg could have certainly explained himself better and could have used different words to get his point across but he now gets to deal with the environment that he and others have created.”

So it won’t be long…….Bloomberg will be cancelled.

Share and speak up for justice, law & order...
Tags: 2020bloombergeditorialraciststop and frisk