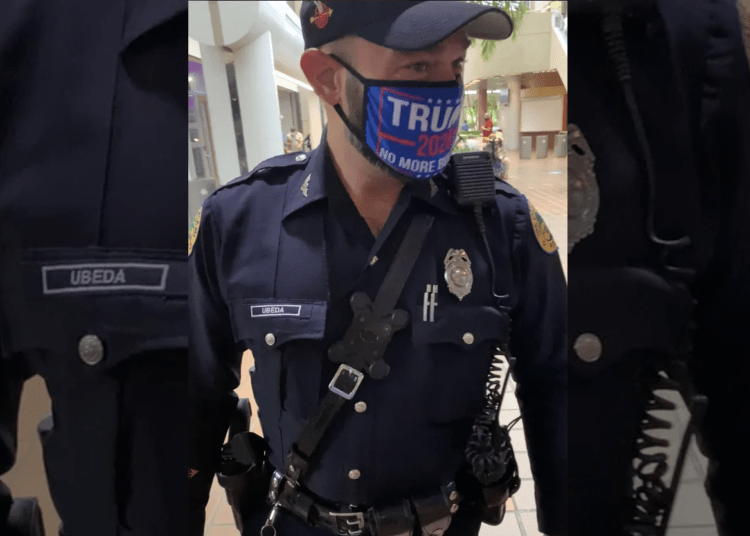 MIAMI — A uniformed police officer who was photographed wearing a “Trump 2020” mask at a Florida early voting site could face suspension.

Miami-Dade County Democratic Chairman Steve Simeonidis said a photo of the armed officer in the mask was “city funded voter intimidation” in a Tuesday tweet.

Here is @CityofMiami Police Officer Daniel Ubeda, in full uniform with badge and gun wearing his Trump mask inside of the polling location in government center.

This is city funded voter intimidation.

Ubeda should be suspended immediately. pic.twitter.com/TbJxu6mcem

About an hour later, the Miami Police Department condemned the behavior and promised to address the situation.

We are aware of the photograph being circulated of a Miami Police officer wearing a political mask in uniform. This behavior is unacceptable, a violation of departmental policy, and is being addressed immediately. pic.twitter.com/E3eO0IQh0f

The officer, photographed while in line to vote, violated department and polling place policy by promoting a political candidate, Miami Mayor Francis Suarez said at a Tuesday press conference. The situation would have been “much more serious” had the officer not been voting, Suarez said, USA Today reported.

“There were people claiming it was voter intimidation,” Suarez said. “Officers have a responsibility … to protect our residents and they have to do that in an impartial manner and they can’t be making political statements or making political stances while they are wearing a uniform.”

Suarez said officers are allowed to vote while in uniform. It’s unknown if the officer was on duty at the time.

Miami Police Chief Jorge Colina described the officer’s behavior as “unacceptable” and a violation of departmental policy in Tuesday statement. He said the action was being “addressed immediately.”

Tommy Reyes, president of the officer’s union, said in a statement that police officers have free-speech rights under the U.S. Constitution, and state law allows officers to vote in uniform, USA Today reported. Reyes also pointed out that the union, Fraternal Order of Police, has endorsed Donald Trump’s reelection bid at the national level.