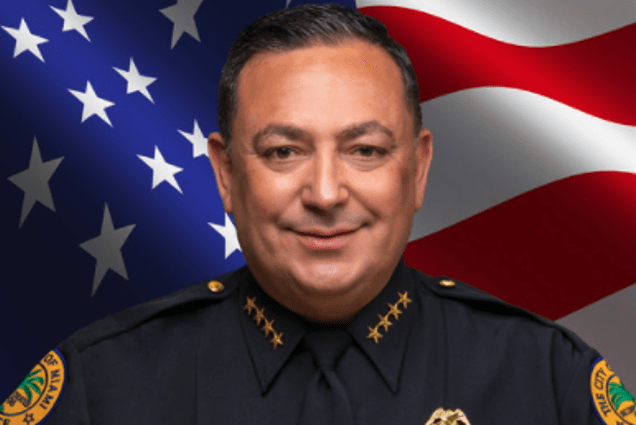 MIAMI — Chief Art Acevedo of the Miami Police Department is being investigated by the city’s Citizens Investigative Panel for an offense similar to circumstances that led to the termination of two high ranking officers earlier this year. The firings were at his direction.

The investigation of Acevedo is related to damage on his city-issued SUV. NBC 6 obtained photos that show scratches and other minor damage on Acevedo’s unmarked Chevy Tahoe. The local news outlet was told by a police source the bumper was separated in the front of the vehicle.

According to a complaint filed against Acevedo, the vehicle sustained damage sometime between Sept. 6 and Sept. 10. It also alleges that he should have disclosed the collision damage to the department several days before it was eventually revealed.

“No police report was generated to document the damages as required by the City of Miami Departmental Orders,” the complaint said.

Miami Police Union President Tommy Reyes said he took the photos several days after first seeing the damage and prior to the Sept. 10 police memo that described the damaged and the investigation into it, NBC 6 reported.

The rankle with police personnel is because earlier this year, two top-ranking Miami police officers — Commander Nerly Papier and her husband Deputy Chief Ronald Papier — were terminated after she got into an accident and the department determined rules were violated in the manner it was handled.

“It appears to be pretty hypocritical that we had someone who was fired not too long ago for the same type of incident — who was fired for not reporting I would say a minor crash — was fired, and now it appears the chief has committed the same infraction,” Reyes argued.

Through a department spokesperson, Acevedo told NBC 6 that he welcomes the investigation and called the allegations baseless. He claims the complaint is an attempt to hinder his ability to reform and improve the department.

However, the anonymous Citizens Complaint alleges the timeline of the damage and the reporting of it is “clearly an attempt to cover up the damages and how Chief Acevedo’s vehicle was damaged.”

Reyes said the present conflict is simply a microcosm of trouble in the department.

“The members have made it pretty clear. The morale sucks right now. They are not happy. Cops don’t want to come to work,” Reyes said. “They are afraid to do their job and I did an internal survey and the survey was actually pretty shocking for me. The numbers were pretty high. I don’t think the members want to work for Art Acevedo anymore.”

“Although I have personally reviewed the facts surrounding Chief Acevedo’s unmarked vehicle incident, I welcome the investigation the Civilian Investigative Panel has initiated,” Noriega said. “It is very unfortunate however that yet again this seems to be another attempt by the Fraternal Order of Police to baselessly undermine our Police Chief.”

When the investigation into allegations of Acevedo’s misconduct is completed by CIP, it will be submitted to Noreiga for disposition. Based upon his comments, it appears as though the city manager has already concluded it is without merit.

When he was hired Acevedo had been hailed by the Miami mayor as the “Michael Jordan of police chiefs,” Click2Houston reported. Unfortunately, most of the “Scottie Pippens” in the department do not share his enthusiasm.

This is not the first case of apparent hypocrisy displayed by Acevedo. Last month, Officer Daniel Ubeda used the hand signal identified as “ok” or the “number 3” during a photo taken with partners at the department following a big gun bust. A commander posted the photo on Twitter and Acevedo relieved Ubeda of duty pending an internal affairs investigation to conclude if the hand gestures represented “White Power,” Law Officer reported.

Reyes said the finger gesture meant a total of “six” as in the number of colleagues on the officer’s shift, not white power.

It’s also noteworthy that Ubeda’s supervisor and the commander who tweeted the photo are black, and that they never raised any issues, according to reports.

Shortly after Ubeda was relieved of duty, a picture of Acevedo surfaced showing him making the same hand gesture while he was chief of police in Houston.

Chief Troy Finner of the Houston Police Department said he was present when the photo of Acevedo was taken where he was “throwing up the threes.”

“That’s at Jack Yates High School, Third Ward. There’s so much pride. That’s a historically African-American community in Houston. If you talk to any Third Ward person, they call it ‘throwing up the threes,” Finner said.

According to Click2Houston, Acevedo’s gaffes during his short tenure in Miami also include:

NBC 6 said Acevedo was unavailable for comment at the time of publication.