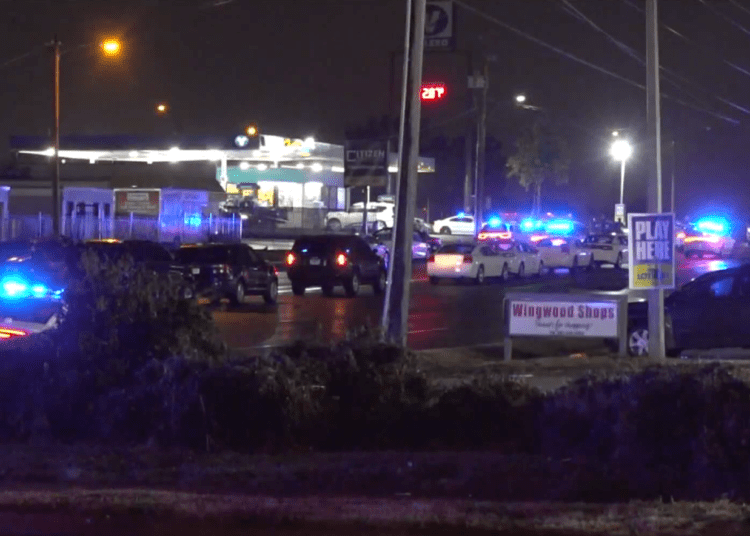 MEMPHIS, Tenn. – A Memphis police officer was shot multiple times at a gas station in the southeast part of the city Monday night and is listed in critical condition. The suspect is dead following the gun battle, according to law enforcement authorities.

The Tennessee Bureau of Investigation said the officer was responding to a call of a suspicious vehicle near the Valero gas station in the 4200 block of Winchester Road at 9:15 p.m. The officer arrived about three minutes later and tried to make contact with the individual in the vehicle. Ultimately, shots were fired by both the officer and the suspect, WREG News 3 reported.

The officer was transported to Regional One Hospital in critical condition. “The (suspect) then ran west to a nearby business in the 4100 block of Winchester.  He was located by officers in an idling vehicle where he was pronounced deceased,” TBI said.

Police units near the Valero gas station in Memphis where a police officer was critically wounded. (Screenshot WHBQ)

“Officers are on the scene of an officer-involved shooting in the 4100 block of Winchester that occurred at 9:15 pm. A Memphis Police Officer was shot multiple times and transported to ROH in critical condition. The subject who fired shots at the officer was also struck and pronounced dead at the scene. The Tennessee Bureau of Investigation has been contacted and will investigate this incident. All additional info will come from their PIO.”

The investigation remains active. The names of the critically wounded officer and the deceased suspect have not been released and no further details were immediately available.