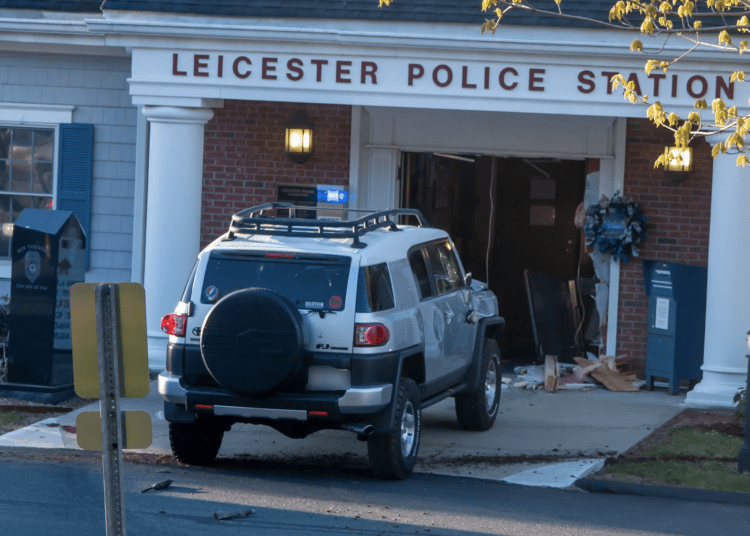 The man, in his early 20s, had driven his vehicle through the closed steel doors of the police station. He repeatedly struck the double doors just after 6 a.m. Sunday, according to Worcester County District Attorney Joseph Early Jr. “We’re very fortunate that no one else was hurt,” he said, Boston Herald reported.

Almost the entire vehicle was inside the station’s lobby after the man drove his vehicle up the handicapped-accessible ramp and rammed the doors several times, the DA said.

Leicester Police officers then saw the man exit his vehicle carrying a rifle. The man aimed the weapon at officers before police opened fire on the suspect, Early said during a press conference in Leicester Sunday afternoon.

“The officers then rendered medical aid to the man until an ambulance arrived, which was a very short time later,” the DA added. “They transported him to St. Vincent Hospital in Worcester, where he was pronounced deceased.”

The DA did not say whether the man fired at police, citing the ongoing investigation. Fortunately, there were no officers injured during the encounter.

“You got a guy shouldering a rifle, pointing it at the officers,” Early said of the video surveillance of the incident. “You can see the reaction of the officers as what appears to be that rifle pointed at them.”

Continuing, the prosecutor added, “The police have a hard, hard job. You got a guy pops out of a truck, and he’s got a rifle pointing at you. … Their job is so hard.”

Two officers have been placed on administrative leave while an investigation is underway, in accordance with the department’s policy when an officer-involved shooting occurs.

“There’s no danger to the public at this time,” Leicester Police Chief Kenneth Antanavica emphasized, regarding the isolated incident, Boston Herald reported.

“Our thoughts and prayers go out to everybody involved in this incident,” the chief added.

“We’ve got to let our police do what they’ve got to do,” Early said of the investigation.

The man was known to police “a little bit,” the DA said, adding the man had an upcoming court date in June for a traffic violation. Nevertheless, authorities did not identify him.

Photos from the police station Sunday morning showed a Toyota SUV right in front of the police department’s main entrance, and damage to the station’s front doors.