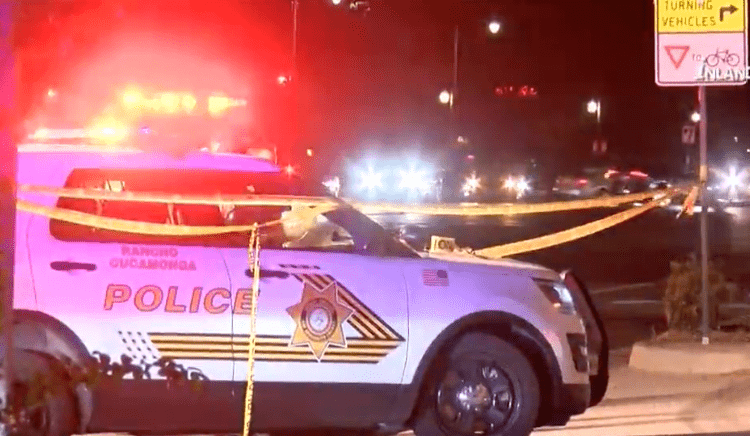 A suspect pinned a deputy between vehicles and attacked with a knife before getting shot. (Screenshot KTLA)

RANCHO CUCAMONGA, Calif. – A driver pinned a deputy with his car and then launched an attack with a knife before he was fatally shot Saturday, according to the San Bernardino County Sheriff’s Department.

The deadly encounter took place about 7:15 p.m. in the 11800 block of Foothill Boulevard in Rancho Cucamonga. Deputies were in the area conducting a traffic stop related to a shoplifting case, the Sheriff’s Department said.

During the investigation, a Hyundai Elantra approached the deputies. The male driver reportedly accelerated towards the deputies, hitting one and pinning him between the two automobiles, KTLA reported.

Next, the suspect exited his vehicle and approached the deputies with a knife. At least one deputy responded with gunfire, neutralizing the threat, according to the Sheriff’s Department.

Both the injured deputy and the attacker were transported to the hospital. The deputy sustained leg injuries, but was later discharged and is recovering at home.

Marlon Bonds, 34, of Santa Monica, was identified as the suspect. He was pronounced dead at the hospital.

According to the Sheriff’s Department, Bonds had no connection to the shoplifting case that was under investigation prior to the felonious attack.

The investigation of the deputy-involved shooting is ongoing. Anyone with information about the case is asked to contact Detective Malcolm Page of the Sheriff’s Department’s Specialized Investigations Division at 909-890-4904. Anonymous tips can also be submitted at wetip.com.