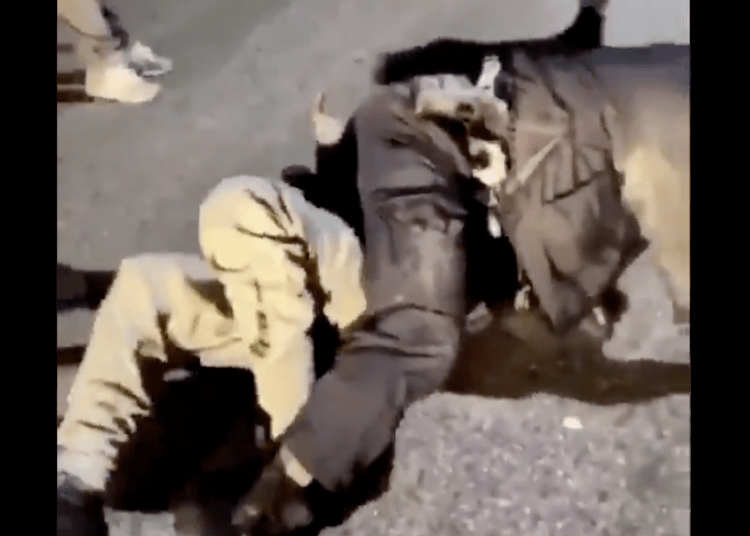 BALTIMORE – Marilyn Mosby, the Baltimore state’s attorney, and the police have had a contentious relationship for years. And there is no evidence of peace anytime soon after her latest blast at officers.

Saturday, Mosby took aim at the city’s police union after their president condemned a violent attack against a city police sergeant Friday evening.

Mosby accused the police union of “fanning the very flames they then call on me to put out,” saying union officials responded to the violent attack with “inappropriate political rhetoric.”

A video posted on Twitter shows a Baltimore sergeant wrestling on the ground late Friday with a suspect who is accused of spitting in the sergeant’s face. The sergeant is repeatedly kicked by bystanders while trying to make the arrest.

This is the current climate in #Baltimore disturbing and humiliating. I’m sure going to work under these conditions is making it harder day by day for most. #stayalertstayalive #Policing in 2020 #ThisIsBaltimore a broken City!! pic.twitter.com/YqoYlkcPjw

The unnamed sergeant was not seriously injured in the fracas. Maryland’s governor and the city’s mayor and police commissioner all condemned the crowd’s behavior – while also praising the work of the police officer, Fox News reported.

Nevertheless, Sgt. Mike Mancuso, president of Fraternal Order of Police Lodge 3, said city officials shared in the blame for the attack. The FOP president said it was “indicative of a broken city that is being led by people who have absolutely no real time crime plan or, it seems, even know how to formulate one.”

“Crime in Baltimore is out of control,” Mancuso observed, “and until new leadership is elected and appointed, this lack of respect for the law and those who enforce it will continue and deepen.”

The city had a disgraceful year in 2019. It was a year that saw Baltimore set a per-capita record for homicides. Moreover, leadership continued to fray as ex-mayor Catherine Pugh was forced from office. She resigned in May and subsequently pleaded guilty to conspiracy and tax evasion charges in connection with a scam involving sales of her self-published children’s book.

“It really takes some leadership in the city to star getting tough,” Hogan said Wednesday at a Maryland National Guard event, Baltimore’s WBAL-TV reported. “There’s no crime plan, there’s no continuity and it’s just simply unacceptable that people are being shot and killed in the streets every single day, and people are fed up with it.”

Later Saturday, Mancuso called out leadership for hypocrisy after Mayor Bernard C. “Jack” Young and Police Commissioner Michael Harrison addressed reporters at a Saturday news conference about the attack on the police sergeant.

.@BaltimorePolice Commissioner Michael Harrison speaking about the video from last night of an officer being kicked by onlookers while attempting to make an arrest. pic.twitter.com/Z1eNp5ZGdg

“Clearly, the Commissioner did not fully appreciate the severity of the situation in which our brave Brother found himself, despite its blatancy,” Mancuso wrote in a statement. “He cannot treat our membership with disdain on a daily basis, then run to defend them when it suits his political agenda.”

To the mayor, Mancuso wrote: “Go have your walk on Pennsylvania Ave., spew your rhetoric about the failed crime plan, and tell everyone how tough you are on criminals. We all know the truth is that you are way in over your head! Attacking me is just another attempt to take the heat off your failed leadership.”

Earlier, Harrison had issued a statement saying he was “outraged” by the attack against the police sergeant and pledged that “Those involved will be identified and prosecuted to the full extent of the law.”

Commissioner Harrison:
"I am outraged by the video showing a BPD sgt being kicked as he was arresting someone for spitting in his face. Those involved will be identified and prosecuted to the full extent of the law." For the full statement,go to: https://t.co/vCePohhEBm

Young wrote that the attack was “a reminder of the dangers our law enforcement officers face on the job.”

“While we’re all thankful that the sergeant was not seriously injured, the situation could have easily turned more dangerous,” the mayor added in a separate message. He added that one arrest had been made and police were “actively searching for others.”

The video circulating of a Baltimore police sergeant being attacked while trying to do his job and make an appropriate arrest is a reminder of the dangers our law enforcement officers face on the job.

Mosby, 39, who became the state’s attorney for Baltimore in 2015, wrote that she too was “disgusted by the blatant assault against the police officer,” but she criticized the police union for being “relentlessly divisive” and accused it of “hypocritical finger-pointing.”

“The same sense of outrage in this case should be expressed by the leaders of the police union when their officers are convicted of attempted murder, assault, and unlawful arrest against citizens,” Mosby wrote.

In December, Mosby compiled a list of 305 city police officers, saying their credibility was in question, preventing them from being called as witnesses in criminal cases.

In 2016, Mosby drew sharp criticism for her work on the Freddie Gray case, in which six police officers were charged in connection with the death of Gray, a black arrestee who died in the back of a police van in 2015. All six officers were later acquitted.

Consequently, the animus between the FOP and Mosby continues.