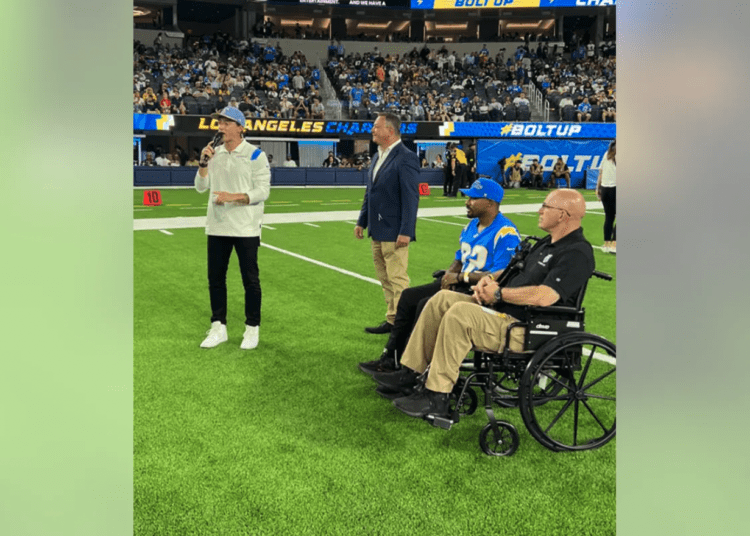 LOS ANGELES – Police officers wounded in the line-of-duty were honored Saturday by the Los Angeles Chargers during a preseason football game against the Dallas Cowboys.

The Chargers partnered with The Wounded Blue to honor officers who have suffered serious injuries during the course of their duties. Wounded officers from across the country received a tribute by participating in pre-game festivities and during halftime, Fox News reported.

Officer Juan Reyes of the California Highway Patrol and Deputy Marcus Mason of the San Bernardino County Sheriff’s Department ignited the “Heroes Cannon” at SoFi Stadium in Inglewood, California, to begin the game. Reyes sustained six gunshot wounds during an encounter in Studio City and Mason was wounded in a separate shooting.

Lt. Randy Sutton, retired from the Las Vegas Metropolitan Police Department, is the founder of The Wounded Blue. He was joined on the field at halftime by former Pennsylvania Highway Patrol officer Bob Bemis and Mason as they were honored by the Chargers.

Bemis is paralyzed and blind in one eye after being attacked on duty. Bemis was in charge of the “Thunder siren,” a World War II-style siren that blares when the home team scores a touchdown, according to Fox.

“We are honored by the Chargers’ support of America’s wounded officers,” Sutton said in a press statement. “More than 120,000 officers* have been attacked in the line of duty overt he last 2 years. Too often, America’s law enforcement are severely wounded and left to fend for themselves, as 85% of departments don’t have the resources to deal with the long-term issues they face with their injuries. PTSD and suicide are also at an historic high. Recognizing these officers and providing peer support for them is critical to their recovery.”

According to The Wounded Blue, the Chargers are the “first known NFL team” to honor law enforcement since the summer of 2020, a season filled with anti-police rhetoric and riots following the death of George Floyd.

Officer Jennyie Hill from Georgia and her service dog Barron. Hill serves on the peer support team of The Wounded Blue, where she helps others with PTSD and suicide prevention. (The Wounded Blue)

As individual NFL players paid tribute to people who died during confrontations with law enforcement officers, former Jacksonville Jaguars tight end Tyler Eifert courageously honored fallen retired St. Louis police captain David Dorn during season. Dorn was brutally shot and killed in June 2020 while he checked on his friend’s pawn shop as it was being looted by rioters. Stephan Cannon, 26, was convicted of the homicide, Law Officer reported.

The Chargers encouraged fans to text CHARGERS to 877-801-0911 to donate to The Wounded Blue, which continues to support officers who have been assaulted while on the job.

“Nationwide, there is a common misperception that officers have lifelong pensions and health benefits that can take care of them; but the reality is that is simply not true. In fact, 85% of departments across the country are from smaller cities who do not have the resources to help their officers. The Wounded Blue helps them gain access to medical appointments, X-rays, PTSD counseling and peer support, among other benefits,” the group said in an Instagram post prior to the game.

The Chargers donated more than 100 tickets for wounded officers in the Los Angeles area, according to the charitable organization. As a result, wounded officers from many Southern California police agencies were in attendance.