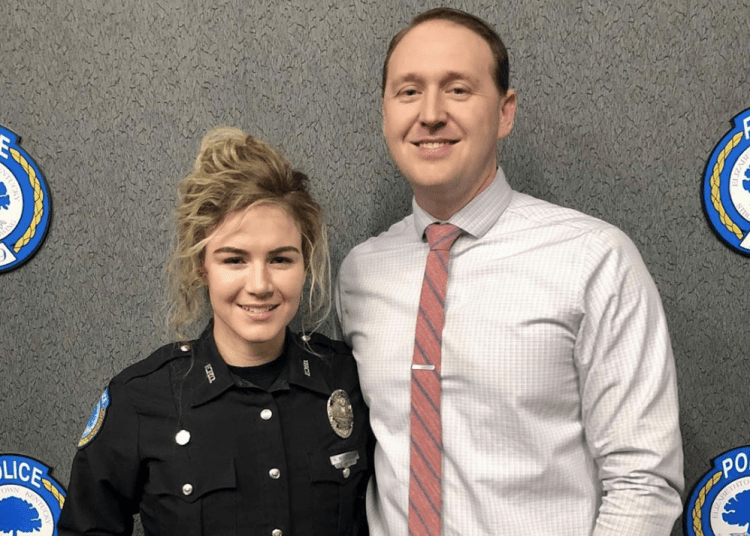 LOUISVILLE, Ky. – A law enforcement couple from Kentucky cut their date night short to thwart an armed robbery. The two off-duty cops sprang into action from their table at a Louisville restaurant, drawing their firearms and chasing the suspect out of the building.

Detective Chase McKeown and Officer Nicole McKeown, both of the Elizabethtown Police Department, have been married for six months. According to WDRB, they were out for date night at a branch of Raising Cane’s Chicken Fingers at Mid City Mall in Louisville’s Highlands neighborhood Saturday.

That’s when suspect, Justin T. Carter, 30, reportedly entered the restaurant wearing a mask and flashed a gun at an employee several times while demanding money from the register.

“I think we kind of both saw him at the same time,” Nicole McKeown said. Knowing that it was flu season, Nicole says she thought at first that Carter might be sick, but as she continued to watch, she realized there was something more sinister happening. That’s when she turned to her husband. “I looked at him and said, ‘That’s kind of odd.'”

Security cameras captured the moment both off-duty officers got up from their table, drew their weapons and ran to the front of the restaurant. The armed law enforcement couple can be seen chasing the suspect wearing a mask and a black hoodie out of the building.

In his haste to get away, Carter dropped his weapon as he fled on foot, according to a police report. The McKeowns ran after him and held him at gunpoint a few blocks away. Louisville Police Department officers responded to the scene and took Carter into custody.

He was charged with first-degree robbery, receiving a stolen firearm and possessing a handgun as a convicted felon. Authorities determined the gun Carter had was stolen from Jeffersontown police, according to the police report.

The McKeowns met on the job at the Elizabethtown Police Department when Nicole was a dispatcher and Chase was a patrol officer.

“At our church, we’ve been focusing on marriage,” Chase McKeown said, adding that his church emphasizes having a “date night” once a week. Nicole said the decision to eat there was a no-brainer, as it was the first place they ate after their wedding.

Det. Dan Mason of the Louisville Metro Police Department’s Robbery Unit applauded both officers for their bravery, saying they acted “honorably and heroically.”

A representative of Raising Cane’s was on-hand to thank the officers, WDRB reported.

“We are extremely blessed that they chose to dine with us,” she said, adding that, “It’s because of good people like Chase and Nicole who give us good hope for tomorrow…we’ll never be able to thank them enough.”

Carter appeared in court Monday and was represented by a public defender. A preliminary hearing is scheduled for Feb. 25.