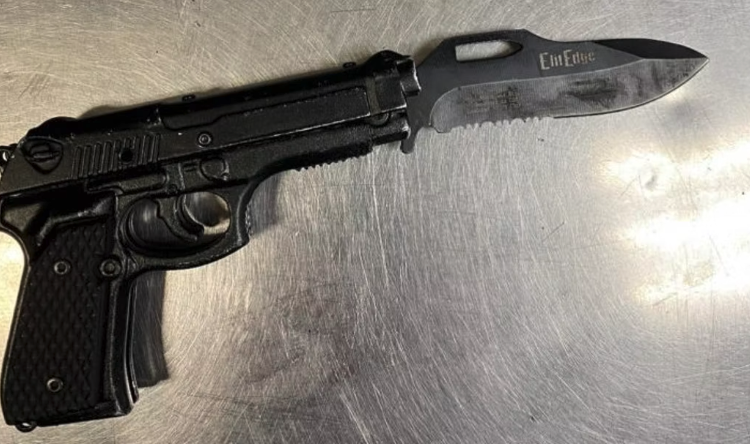 LOS ANGELES – LAPD released a photo of the weapon (gun-like knife) used by the suspect to attack comedian Dave Chappelle on the Hollywood Bowl stage on Tuesday night.

The police handout shows two images of the weapon, one in which the blade is tucked under the barrel, another that shows the blade extended, the Daily Wire reported.

Authorities identified the attacker as 23-year-old Isaiah Lee. He was arrested for felony assault with a deadly weapon (ADW), police said.

LAPD also released this brief account of the crime:

On May 3, 2021, around 10:40 p.m., a comedian was performing at the Hollywood Bowl and had finished his act. As he was exiting the stage a male, who was part of the audience, jumped onto the stage and tackled the comedian to the ground. The suspect produced what was later discovered to be a replica handgun and pointed the item at the victim. Hollywood Bowl uniformed security officers, who witnessed the incident, engaged the suspect and removed him from the victim and took him into custody.

Hollywood officers responded to a call for service and took control of the suspect. The replica handgun that also contained a knife blade was recovered and later processed as evidence. The suspect was arrested for Assault with a Deadly Weapon. He was transported to a local hospital to treat injuries sustained during the altercation with security. The victim was not injured as a result of the assault. The suspect was treated and cleared to be processed by medical staff.

Comedian Chris Rock followed Chappelle on stage and said of the attacker, “Was that Will Smith?”

Last month, Rock was hosting the 94th Academy Awards, when Smith took offense to a joke and walked on stage and slapped the entertainer.

In what might go down as the most dramatic moment in Oscars history, Rock said in the immediate aftermath, “Oh, wow … wow … Will Smith just smacked the shit out of me.”