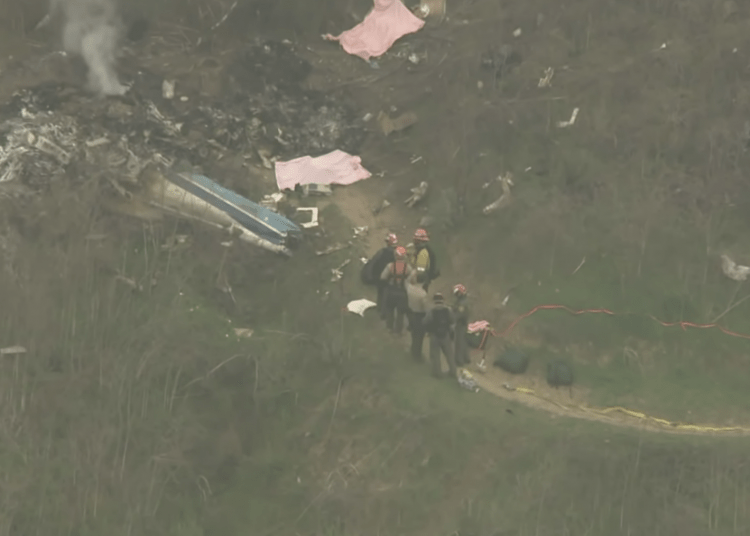 LOS ANGELES – The Los Angeles Police Department said their helicopters were grounded due to fog Sunday morning when the chopper carrying Kobe Bryant and his entourage fatally crashed into the hills of Calabasas.

“The weather situation did not meet our minimum standards for flying,” Rubenstein said, adding that the fog “was enough that we were not flying.”

LAPD’s flight minimums are 2 miles of visibility and an 800-foot cloud ceiling, he said. The department typically flies two helicopters when conditions allow, one in the San Fernando Valley and one in the L.A. basin, he said.

Several experts pointed to the poor flying conditions in the area and said fog will likely play a key part in the investigation, the  Los Angeles Times reported. Dense fog covered the area and continued to hang low on the Santa Monica mountain range hours after the crash.

The helicopter carrying Kobe Bryant and eight other passengers that crashed into a hillside was in a climbing left turn about 2,400 feet high before it dove to the ground, a person familiar with preliminary investigative information about the fatal crash told ESPN.

The source, who spoke on the condition of anonymity, told ESPN that the pilot had, only moments before, contacted air traffic controllers to say that he had begun a climb to “go above the layer” of clouds present.

The location of the fatal crash in Calabasas is about 30 miles northwest of downtown Los Angeles.

Audio reviewed by ESPN indicates that, a few minutes before the crash, an air traffic controller told the pilot that he was “still too low level for flight following,” meaning the aircraft was below the level at which it could be picked up by radar due to the area’s hilly terrain. That audio came from recordings posted on LiveATC.net, which has partial audio of the communication between the pilot and air traffic controllers.

Additional recordings between the pilot and air traffic controllers posted on the site indicate that the pilot was getting guidance from controllers as he navigated what was reported to be dense morning fog.

Air traffic controllers noted poor visibility around Burbank, just to the north, and Van Nuys, to the northwest. After holding up the helicopter for other aircraft, the controllers cleared the Sikorsky S-76 to proceed north along Interstate 5 through Burbank before turning west to follow U.S. Route 101, the Ventura Highway.

Shortly after 9:40 a.m., the helicopter turned again, toward the southeast, and climbed to more than 2,000 feet above sea level. It then descended and crashed into a hillside at about 1,400 feet, according to data from Flightradar24.

When it struck the ground, the helicopter was flying at about 160 knots (184 mph) and descending at a rate of more than 4,000 feet per minute, the Flightradar24 data showed, ESPN reported.

Authorities said nine people were aboard the helicopter and presumed dead. Bryant, an all-time basketball great who spent his entire 20-year career with the Los Angeles Lakers, was among the victims.

The L.A. County coroner’s office said Sunday night that the recovery effort is expected to take several days because of the condition of the crash site and its remote location, reported the Los Angeles Times. Officials have shut down roads leading to the site because of a throng of visitors trying to get there.

The National Transportation Safety Board sent a team of investigators to the site. The NTSB typically issues a preliminary report within about 10 days of a crash that gives a rough summary of what investigators have learned. A ruling on the cause of an aviation crash can take a year or more.

Among other things, investigators will look at the pilot’s history, the chopper’s maintenance history and the records of its owner and operator, NTSB board member Jennifer Homendy said at a news conference.

A Federal Aviation Administration aircraft-registration database showed that the helicopter was a 1991 Sikorsky S-76B model owned by a company named Island Express Holding Corp. It was previously owned by the state of Illinois, according to the database.

“The S-76 is a pretty expensive, sophisticated helicopter. … It’s certainly a quality helicopter,” said Justin Green, an aviation attorney in New York who flew helicopters in the Marine Corps.