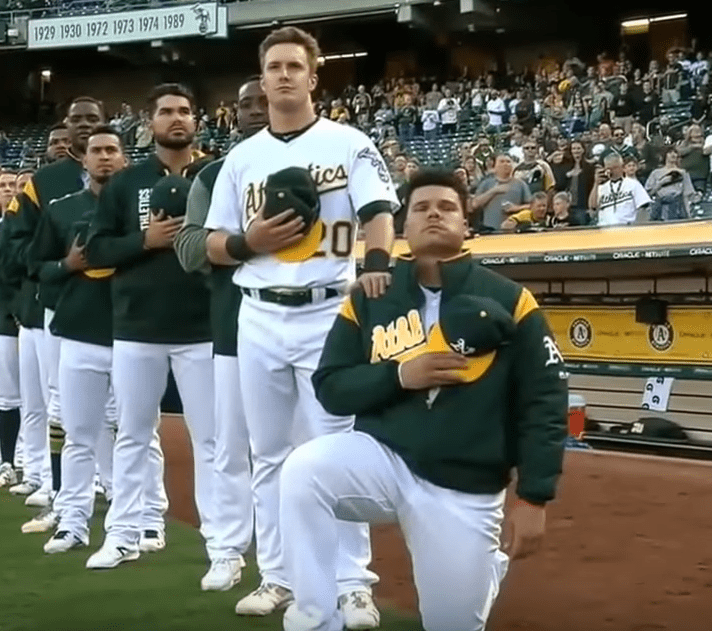 Prior to last week, Oakland Athletics catcher Bruce Maxwell was only known as the only MLB Player to take a knee during the National Anthem.  His arrest, for allegedly pointing a gun at a female delivery driver, thrust him in the news in a way the .237 hitter did not want.

We now have the police report on the incident and we know much more about what happened, including that Maxwell used profanity and “anti-police” language in his encounter with the Scottsdale Police.

Here is a summary of the report as detailed by Yahoo Sports:

• A Postmates delivery person called police saying a man pointed a gun at her while she was delivering food to his home. The man was later identified as Maxwell. According to the woman, Maxwell opened the door and pointed a gun at her face. She asked if he was “Bruce,” the name on the order. Maxwell acknowledged the gun at one point, telling her “not to worry about” it. He eventually took the gun out of her face and took the food. She made it to her car and called police. The woman said the whole interaction took about 60 seconds.

• Police arrived at the scene, found Maxwell and asked him to call 911 and listen to the person on the line regarding how to exit the house safely. He walked out of the house with his hand raised and cell phone to his ear.

• Officers asked Maxwell if he had any guns. He admitted to having two, but said he also had a concealed carry permit. Police returned later with a search warrant and found both firearms.

• Maxwell was compliant until asked to get on the ground. He was handcuffed by officers at this time. One officer readied his taser, while at least two others pointed their firearms at Maxwell during this time. Neither the taser nor firearms were used.

• As officers began asking Maxwell questions, they reported a strong odor of alcohol on his breath. One officer said Maxwell was “often yelling,” using excessive profanities and kept contradicting his version of events.

• At some point during the questioning, Maxwell reportedly grew upset and started “making anti-police statements.”

• The woman positively identified Maxwell as the person who put a gun in her face after he was taken into custody.

• Police confirmed that a “Bruce M.” placed an order at the restaurant where the Postmates driver picked up Maxwell’s food.

Shortly after his arrest, the A’s said they were disappointed and were still gathering information about the case.

Share and speak up for justice, law & order...
Tags: baseballmlbwar on cops