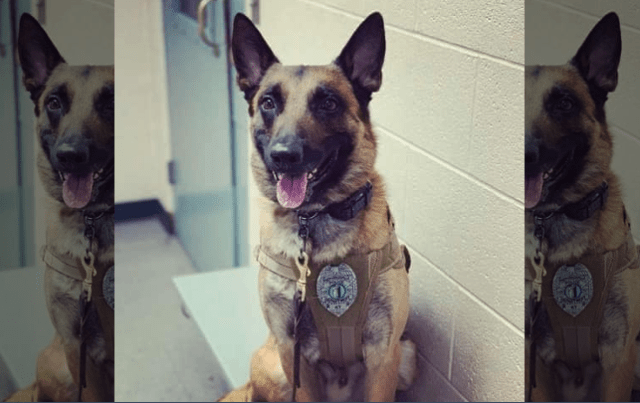 K9 Dash was shot and killed by a fleeing suspect. (Shepherdsville Police Department)

LEBANON JUNCTION, Ky. — A Kentucky police K9 was shot and killed while apprehending a fleeing suspect earlier in the week, according to law enforcement authorities.

Lebanon Junction officers were dispatched regarding a shoplifting suspect at a Dollar General Store. Upon arrival, police found a man outside the business with a firearm, WHAS 11 reported.

The suspect opened fire on officers and then fled on foot, according to the Kentucky State Police.

Shepherdsville’s K9 team located the suspect hiding nearby. K9 Dash was in the process of apprehending the man when he opened fire, subsequently killing the police service dog.

Law enforcement personnel provided the suspect with medical aid as EMS responded. The gunman was transported the University of Louisville Hospital for treatment. His injuries are considered non-life-threatening, WHAS 11 reported.

Chief Rick McCubbin of the Shepherdsville Police Department said on Facebook Thursday morning that K9 Dash had been on patrol with the department for five years.

Moreover, Dash did what he was trained to do: “track and apprehend a suspect and to protect his two-legged partner.”

“That is exactly what Dash did,” McCubbin said. “Apprehended the suspect and gave his life to protect his partner.”

“In the early morning hours we, along with numerous agencies, gave Dash his final ride,” the chief noted.

“KSP will be carrying the case and obviously will have more information as investigation continues. Until then please keep all of the officers involved especially Ofc Jeff Schank, Dash’s two legged partner, in your thoughts.”

Several local fire departments honored K9 Dash with a display. “This is beyond awesome,” McCubbin shared on Saturday as he expressed his gratitude.