Multiple people were transported to the hospital following the shooting 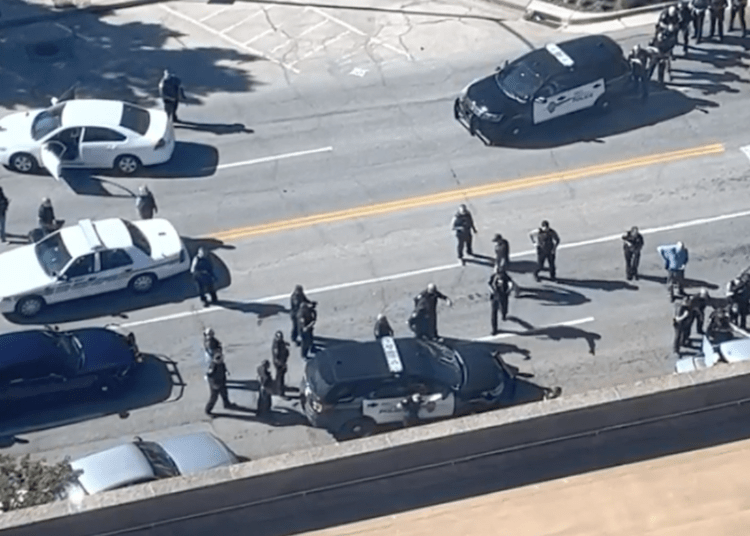 A police officer in Kansas was wounded during a shootout with a homicide suspect. (Screenshot WIBW)

TOPEKA, Kan. – A Kansas police officer was wounded during an exchange of gunfire with a murder suspect in downtown Topeka Thursday morning, according to reports.

The gun battle occurred near S. 6th and Kansas Avenue at the termination point of a vehicle pursuit involving a suspect believed to be responsible in an earlier shooting on Topeka’s south side that left one person dead and another injured, WIBW reported.

Numerous rounds were fired late Thursday morning during the gun fight. One officer was struck by gunfire and was receiving treatment at a local hospital, Lt. Manuel Munoz of the Topeka Police Department said in a news release.

The suspect vehicle was left riddled with bullet holes, standing facing west on S.E. 6th, just east of Kansas Avenue. According to witnesses, a male and female occupant each sustained injuries and were taken away for medical treatment.

Identifying information was not immediately available, according to authorities.

Police were initially dispatched to that location just after 9:30 a.m. One person was pronounced dead at the scene while the other was taken by ambulance to a Topeka hospital, Munoz said.

Police said the homicide was related to a domestic violence incident and the names, ages and genders of the two victims weren’t immediately available.

During a preliminary investigation of the homicide, a Topeka police officer saw a vehicle that was thought to be related to the murder. It was traveling near southeast Topeka’s Hi-Crest neighborhood, Munoz said.

“The suspect initiated the pursuit, which ended in downtown Topeka,” he confirmed.

After the suspect’s vehicle crashed, police said the suspect fired at pursuing officers, hitting one. The officer was taken to a local hospital for treatment.

Topeka police later said the wounded officer was wearing a body armor, which saved him from serious injury. The officer has since been treated and released from the hospital, WIBW reported.

The Kansas Bureau of Investigation will be the lead agency investigating the officer-involved shooting, Munoz said. It was not immediately clear how many agencies may have been involved in the shooting.