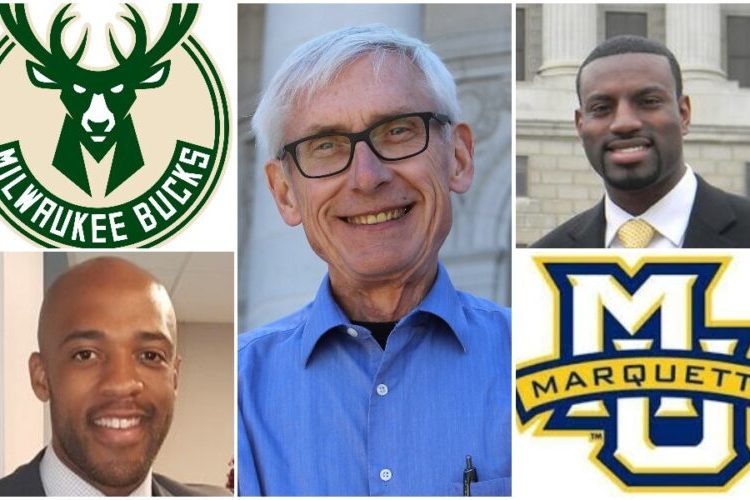 We continue to be impressed by Wisconsin Right Now. As we often say “Journalism Is Dead” but WRN continues to be a leading publication that not only investigates issues fully but does exactly what the media should be doing when officials and leaders in our community blatantly lie.

Lies are generally frowned upon but when it comes to law enforcement, it seems no one is holding those lying accountable. We would like to think that we work very hard in doing that but this piece, from Wisconsin Right Now, is so spot on, we asked them permission to republish it to our audience. They graciously agreed.

All who issued these statements need to do better and hold accountable the only person responsible for the shooting of Jacob Blake: Jacob Blake.

On Tuesday, the Kenosha County District Attorney explained, in detail, why no charges will be filed against the officer for the shooting of Jacob Blake. That decision was quickly overshadowed by the riots at the Capitol, but we think the statements of some people, groups, and newspapers in response to DA Mike Graveley’s decision should not be ignored.

Keep reading. We present a list of the most appalling comments in response to the Graveley decision. Are they inciting rioting? We would ask them all, including Gov. Tony Evers and Lt. Gov. Mandela Barnes: So, you don’t think the officer made the right decision. What do you think he should have done instead when faced with an armed, resisting man wanted on a felony warrant who was about to flee with kids in a car that wasn’t his?

In some cases, the comments are so egregious that we worry they could incite more rioting and violence like the criminal behavior we saw in the summer. Misleading comments about so-called widespread, unjustified “police violence” (which is not backed up by statistics) can incite violence. Misleading comments about specific police shootings – such as the Washington Post falsely tweeting that Blake was unarmed – can too.

Graveley’s decision was soundly based in Wisconsin law and the legal principles of self-defense and defense of others. The evidence revealed by the Democratic DA – and backed up by retired Police Chief Noble Wray – was overwhelming. He concluded that the shooting was not only justified, but that after trying all other trained tactics, the officer had no other choice than to use deadly force.

Blake was armed with a knife. He resisted. He made physical contact with officers, putting the officer who shot him in a headlock. The officers tried other actions first, but they didn’t work (tasing Blake, grabbing his arms). He was about to flee with children in a car that wasn’t his. He was already wanted on a felony warrant and was accused of domestic abuse and sexual assault. If Blake had simply followed the officers’ orders, he would never have been shot.

The headlock means that Blake wasn’t just resisting with a knife; he also attacked a cop. He committed violence against a police officer. This point is skipped over in the statements.

“Officers could not let him leave with a child in the car,” former Police Chief Noble Wray, who was the DA’s use of force expert, said. “This is the stuff Amber alerts are made of.”

The initial rush to judgment condemning the officers was immediate for many, including Governor Tony Evers, who issued an appalling statement the day after the Blake shooting and used the term “mercilessly.” Evers wrote, “what we know for certain is that he (Blake) is not the first Black man or person to have been shot or injured or mercilessly killed at the hands of individuals in law enforcement in our state or our country.”

Will the governor now apologize to the officer in question?

But that wasn’t good enough for our governor, who actually doubled down from his first “mercilessly” statement despite the Democratic DA’s powerful presentation proving the officer acted legally. It also wasn’t good enough for other Wisconsin Democratic leaders, a top newspaper’s columnist, and perhaps most appallingly, an anti-sexual assault organization. Yes, you heard that right.

What is missing from all their statements is the fact that  Jacob Blake’s bad behavior was solely responsible for the outcome that day. His actions resulted in his shooting. He violently attacked a cop. The subsequent rioting caused $50 million in property damage and two deaths resulted. Nothing will change until society begins to hold persons like Blake accountable for their actions.

Blake should have been charged. 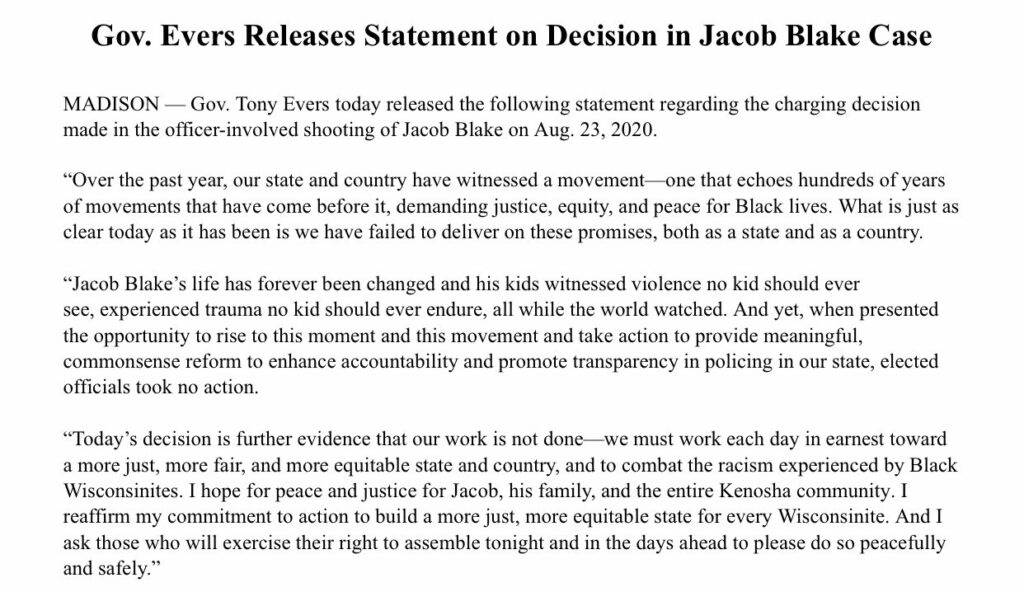 Governor, what you’re missing is that Jacob Blake’s life changed forever, and his kids witnessed violence, because of HIS ACTIONS. Also why should reform result from a situation where the officer acted in lawful self defense? Yes, racism should be combated. Racism is wrong. But why inject racism into a press release about this shooting? There’s zero evidence that Blake’s race had anything to do with it. Graveley’s use of force expert – who agreed with the decision not to charge the officer – is black, by the way.

By fueling people’s false beliefs that the shooting was racist and the result of or an example of inequities and failed promises, isn’t Evers inciting or at least inflaming people? 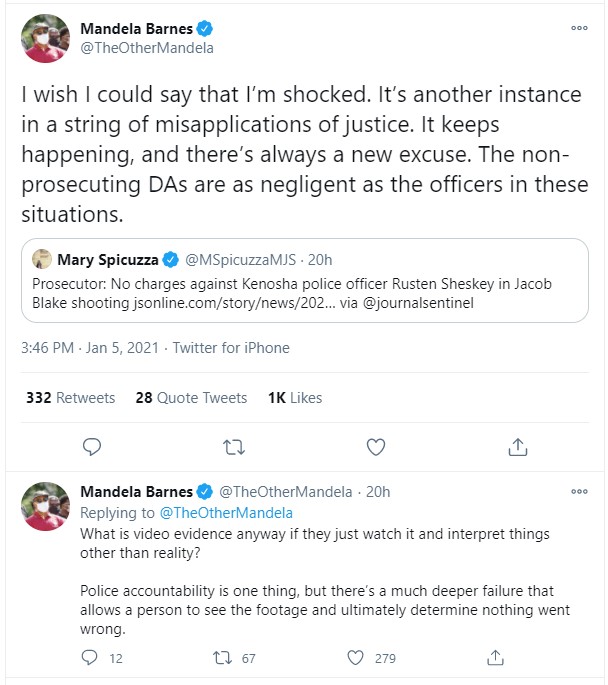 A lieutenant governor should realize that video evidence only presents part of the story. It’s shocking that he wants a police officer charged based on a single video, rather than a comprehensive review of all of the evidence and state law. He’s suggesting a single short video should trump the four months long comprehensive investigation. And we put this guy second in command of the state?

You can’t tell from the far-away video, for example, that Blake was, according to Graveley’s evidence, twisting toward the officer with a knife in his hand. You can’t see the kids he would have endangered if he could have driven off. So the state’s lieutenant governor reveals a single citizen video is more important than a detailed review of ALL of the evidence (other videos, witness interviews, interviews with the officer).

Is he inciting rioting by rejecting state law, which holds that officers have a right to protect themselves if they are in imminent danger? DA Graveley and former Police Chief Noble Wray deserved better. 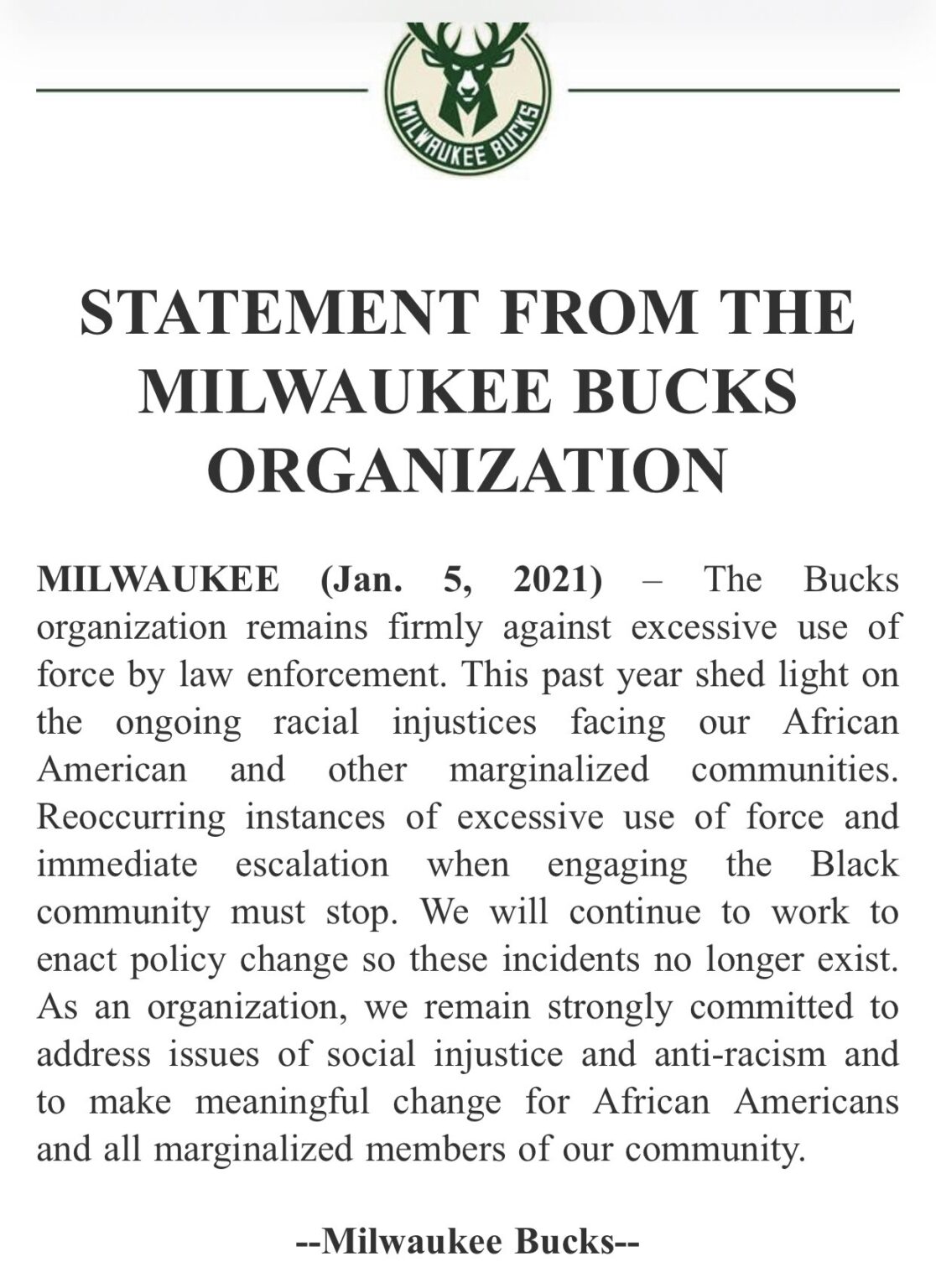 We agree with the Bucks that excessive use of force and racial injustice must stop, but there’s literally zero evidence that the Blake shooting is an example of that. Thus, by bringing those things into their statement on that shooting, are the Bucks fueling false rage and thus potentially inciting rioting or violence? Look at what happened in Kenosha the first time around as businesses burned and deaths resulted. The Bucks can stand firmly against excessive force, but they should admit that this shooting was not an example of that.

We personally won’t attend another Bucks game again as long as the organization remains so unfairly anti-police. 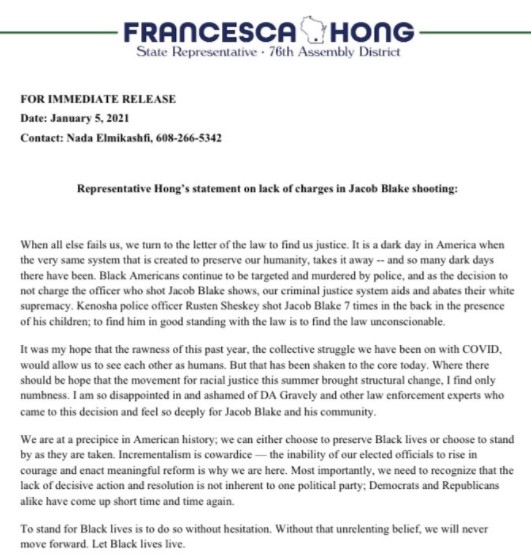 The state representative appallingly paints the Blake shooting as an example of white supremacy. But there’s absolutely zero evidence of that. Could it incite riots and violence? 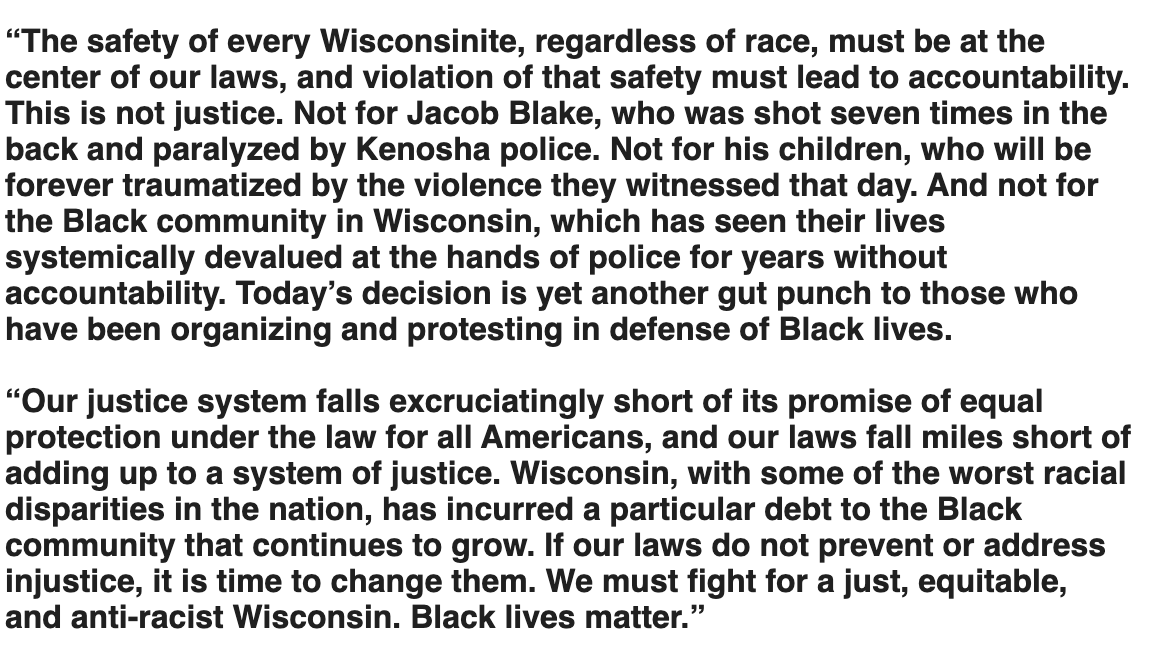 Again, is injecting race into a situation that had nothing to do with race so inflammatory that it could incite riots and violence? 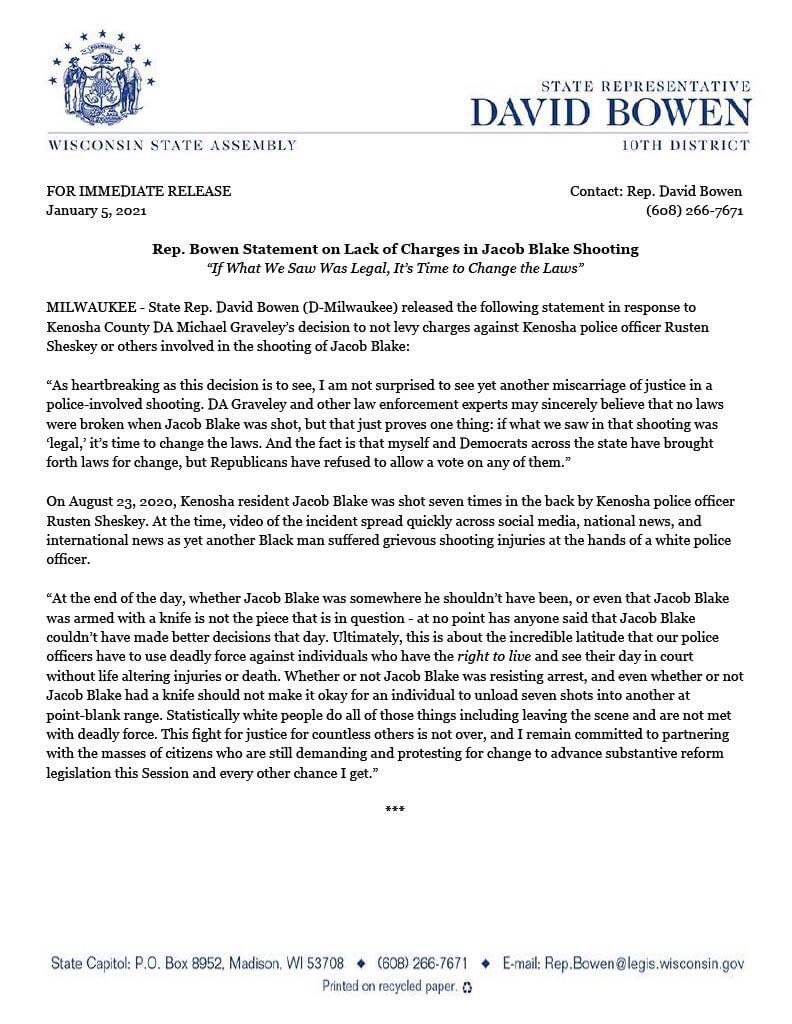 So, to be clear, Bowen thinks state law should be changed so officers can’t protect themselves against people who resist with knives. Bowen admits Blake had a knife, should not have been there, and made a bad decision…but it’s the officer’s fault?

7. The Wisconsin Coalition Against Sexual Assault 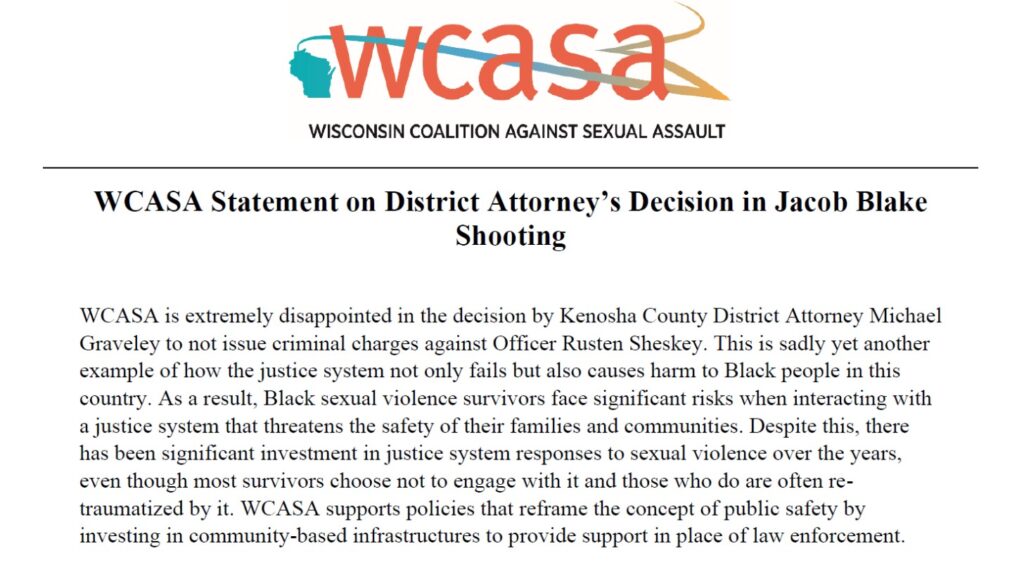 This statement is so enraging that we hardly know where to start. Where is their concern for the black sexual assault/domestic violence accuser in this case? The DA persuasively outlined how the Blake shooting stemmed from a domestic violence situation, and there was a pattern, with Blake as the alleged perpetrator. He was wanted on a felony warrant for it. The risks to the Black sexual violence survivor in this case came from Jacob Blake. The police were there to protect her and her children. For this coalition to defend the alleged abuser shocks the conscious.

Why aren’t they standing up for the true victim? 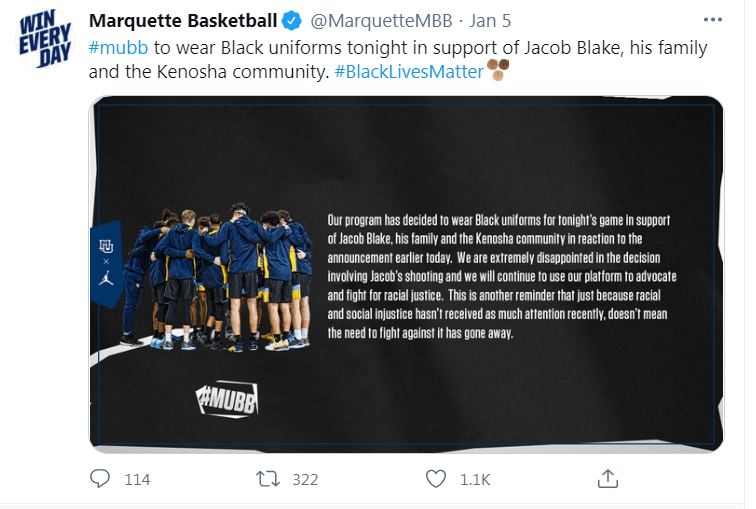 Again, we ask: What should officers do when faced with armed, resisting people wanted on felony warrants who twist toward a cop with a knife and are about to drive off in a car with kids?

She released a statement that said,

“The anger and demand for reformative change demonstrated at the protests throughout 2020 was borne out of the continual inability to bring justice for black lives. No one should have to worry that calling a police officer will bring them harm, let alone cost them their life. We cannot continue the inaction – folks must be held accountable. What happened in Kenosha is a tragedy and an example of a broken system that desperately needs comprehensive reform. Our nation was founded on the principles of freedom and justice for all, however, our justice system lets down our communities of color and promotes violence against black and brown people. Wisconsin is the worst state for racial disparities and this is the result of the inability of our GOP lead legislature to address those disparities. Black Wisconsinites continually have barriers to accessing our criminal justice system, electoral process, education system, and many other aspects of our society. We have to do better.”

First of all, Blake didn’t call the police. The domestic violence accuser did. The call to the police didn’t almost cost him his life – his actions did. An officer acting legally is not an example of a broken system requiring reform.

She is right about one thing: “Folks must be held accountable.”

The Milwaukee Journal Sentinel’s columnist wants the police officer fired for using lawful self defense. By making that argument, he is basically saying that police officers don’t have a right to protect themselves when their lives are in danger. That’s appalling.

Causey wrote: “As a Black man, I would not feel comfortable in Kenosha knowing what could happen if any of these officers stopped me for a simple traffic violation.”

But the officers didn’t stop Blake for a simple traffic violation. They shot him because he was armed with a knife, was violent toward a cop, twisted toward the officer with it, resisted arrest, and was about to drive off with children in the car.

Causey also wrote, “Was shooting to kill Blake the only option? Was resorting to deadly force the only way police could resolve this tense situation?”

But it wasn’t the first option officers tried, which he ignored. For example, they tasered him three times. They gave him verbal commands. They tried to restrain him. It didn’t work as he continued to fight and resist.

Do better. All who issued these statements need to do better and hold accountable the only person who is responsible for the shooting of Jacob Blake: Jacob Blake.