Their crimes are unconscionable 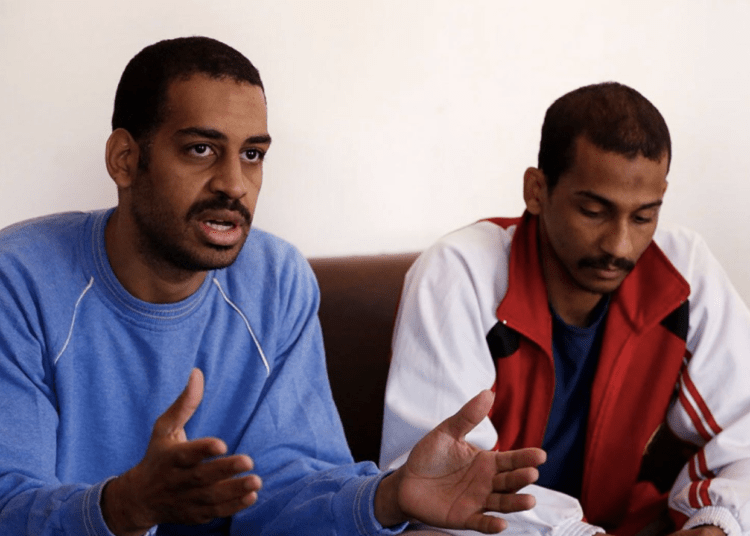 Alexanda Amon Kotey, left, and El Shafee Elsheikh, who were allegedly among four British jihadis who made up a brutal Islamic State cell dubbed "The Beatles." (AP)

ALEXANDRIA, Va. — Two British Islamic State terror suspects known as the “Beatles” were indicted in the torturing and beheading of American aid workers and journalists among others once held hostage in Syria, according to court documents that went public Wednesday.

El Shafee Elsheikh and Alexanda Kotey are two of four men dubbed “the Beatles” by the hostages they held captive, because of their British accents. They previously had been in military custody in Iraq and are expected to make their first appearance in the afternoon in federal court in Alexandria, Virginia, Fox News reported.

Two ISIS militants, part of group referred to by hostages as “The Beatles,” charged with deaths and beheadings of multiple Americans in Syria. https://t.co/ngGELiuvlH

The pair had been linked to the kidnapping and torturous killings of American aid workers Peter Kassig and Kayla Mueller and journalists Steven Sotloff and James Foley.

In a statement, relatives of Mueller, Foley, Sotloff and Kassig said the transfer “will be the first step in the pursuit of justice for the alleged horrific human rights crimes against these four young Americans.”

“Many around the world are familiar with the barbaric circumstances of their deaths – but we will not remember these Americans for the way they died, we will remember them for the way they lived their good and decent lives,” said Assistant Attorney General John C. Demers of the Justice Department’s National Security Division.

In this March 30, 2019 photo, Alexanda Amon Kotey, left, and El Shafee Elsheikh, who were allegedly among four British jihadis who made up a brutal Islamic State cell dubbed “The Beatles,” speak during an interview with The Associated Press at a security center in Kobani, Syria. (AP Photo/Hussein Malla, File)

The indictment details how the pair “were leading participants in a brutal hostage-killing scheme targeting American and European citizens, and others, from 2012 to 2015.” They “engaged in a prolonged pattern of physical and psychological violence against the hostage,” the document further states.

They left London for Syria at separate times in 2012 and, within months, began detaining hostages. Of the four victims named in the complaint, Foley was the first to be “forcibly seized and detained” around Nov. 22, 2012. Mueller and Sotloff were taken hostage on Aug. 4, 2013; and Kassig on Oct. 2, 2013, court papers state.

The 26-page indictment describes the horrific treatment of the hostage victims – which included, among other acts, the forced witnessing of murders, mock executions, shock by electric Tasers, waterboarding or threats of it and beatings – and their ransom demands that were sent to the victims’ families. Hostages’ release, the indictment states, “was conditioned on the transfer of large sums of money or concessions from the U.S. government, such as the release of “Muslim prisoners,” or large sums of money, Fox reported.

Foley’s family received an email on Dec. 2, 2013, which stated, in part: “James Wright Foley is being detained by us … James was detained whilst operating as a ‘Journalist.’ Our Muslim prisoners are extremely valuable to us for verily those who are honored most …”

In a subsequent email weeks later, the captors “taunted the Foley family, stating the U.S. government treated the Foleys ‘like worthless insects.’” The email demanded 100,000,000 euros, according to the indictment.

In a Feb. 9, 2014 email to Kassig’s family, his captors called for the release of Muslim prisoners and added: “Peter was acting as a ‘MEDIC’ when captured. We have no doubt that these ‘MEDIC’s’ are nothing but another front in the battles between the Muslims and the imperial west and its allies …”

And on May 29, 2014, Mueller’s family received an email that included an audio recording from the young woman. In the recording, Mueller repeated her captors’ demands for the release of a Muslim prisoner or a payment of five million euros.

On Feb. 7, 2015, Mueller’s family received another email that confirmed Kayla’s death, the indictment states. Attached to the email were three photographs of her deceased body.