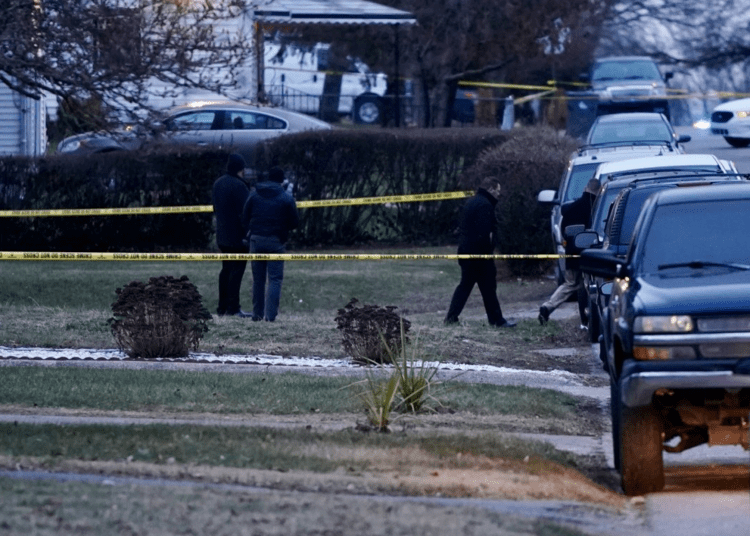 The suspect was identified as a 17-year-old family member. The teenage boy is accused of fatally shooting his father, stepmother, two teenage relatives and a 19-year-old pregnant woman in the family’s Indianapolis home. As a result, he has been charged with six counts of murder in connection with the slayings, prosecutors announced.

Raymond Ronald Lee Childs III, who was arrested Monday, was charged as an adult with six counts of murder, including one count for the death of the woman’s unborn child, Marion County Prosecutor Ryan Mears announced at a news conference. The baby had been due to be born in one week, Mears said.

Childs also faces an attempted murder charge in the wounding of another relative, a male juvenile who was the sole survivor of Sunday’s shooting at the family’s home on Indianapolis’ near northeast side, authorities said. He was also charged with one count of carrying a handgun without a license, Fox News reported.

Indiana state law specifies that any individual at least 16 years old will be charged as an adult if they are accused of committing certain felonies, including murder and attempted murder.

Mears said that before the shootings, Raymond Childs III had a dispute with his father, 42-year-old Raymond Childs. “It certainly appears there was an argument between father and son in the residence,” Mears said, adding that police are still investigating the nature of that dispute.

INDIANAPOLIS — A juvenile suspect was arrested Monday in connection to what Indianapolis police described as a “mass murder” that left six people, including an unborn child, dead and a seventh person wounded.

The Indianapolis Metropolitan Police Department said that a juvenile suspect had been identified and arrested by Monday morning. Since the suspect is a juvenile, the department did not release a name, Fox News reported.

Detectives do not believe any additional persons were involved. No additional details about the arrest were released.

The victims killed have been identified as Kezzie Childs, 42, and Raymond Childs, 42, — a mother and father — as well as their children, 18-year-old Elijah Childs and 13-year-old Rita Childs.

Another woman, 19-year-old Kiara Hawkins, was also killed. She was pregnant with a baby boy who also did not survive.

“Yesterday, we promised swift justice for this heinous act. Today, we delivered on that promise,” said police Chief Randal Taylor said in a statement. “While removing the alleged perpetrator of yesterday’s mass murder from our neighborhoods does not bring back the lives senselessly lost, hopefully, it will bring us one step closer to healing as a community.”

Yesterday, we promised swift justice for this heinous act. Today, we delivered on that promise. https://t.co/dvlY82JNF2

Continuing, he wrote, “I am grateful to all of the IMPD officers and criminal justice partners who have worked tirelessly for the last 30 plus hours to bring justice for these victims, their friends and families, and our entire community. I ask community members to join me in praying for the continued recovery of the young man whose life has been forever changed.”

The mass shooting unfolded at two separate locations early Sunday morning. It did not appear random, authorities said. Police first responded before 4 a.m. to the 3300 block of E. 36th Street to a report of a person shot, Law Officer reported.

That’s where officers located a juvenile male with apparent gunshot wounds. He was transported to an area hospital and is expected to survive his injuries, police said.

Officers later “received information” that led them to a residence in the 3500 block of Adams Street, where five individuals were found with apparent gunshot wounds.

All were deceased, but, because one individual was pregnant, she was transported to an area hospital. Despite the best life-saving efforts provided by medical staff, both the female and the unborn child did not survive, the department said in an initial press release.

IMPD spokeswoman Aliya Wishner said the juvenile arrested in the killings is not the same juvenile male who was found wounded Sunday before the victims’ bodies were discovered, the Associated Press reported.

3/3 Police have expanded their perimeter at least a block in each direction as their search/investigation continues. @MaryWTHR has an update coming up at 9am pic.twitter.com/CqnnKvVDVQ

Indianapolis Mayor Joe Hogsett described Monday’s announcement about the arrest as, “the first step toward justice for the senseless acts that cut short the lives of six of our neighbors in the early hours of Sunday morning.”

“While nothing can bring back the Childs family, I hope that the swift action of the Indianapolis Metropolitan Police Department offers some comfort to all of those who have been left to grapple with this tragic loss,” Hogsett said in a statement provided to Fox News. “My thanks go to the men and women of IMPD whose thoughtful investigative work led to the arrest of the suspect, and my prayers are with the family, friends, and community impacted by this devastating act of violence.”