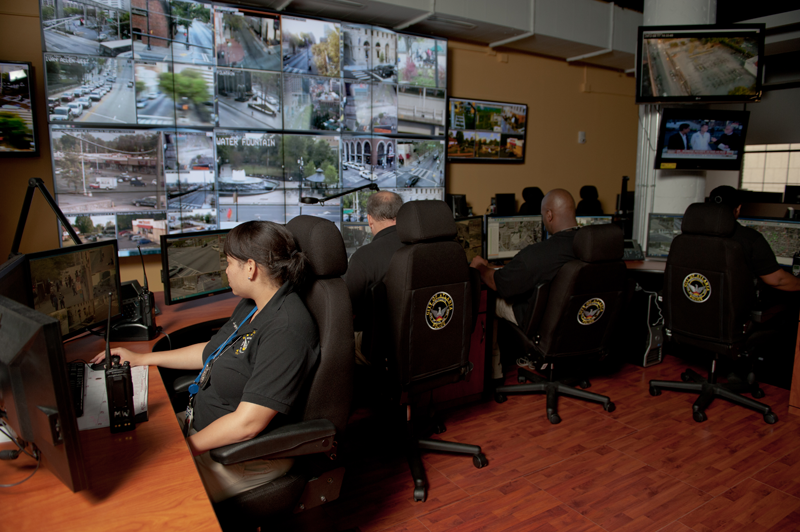 Baltimore. Chicago. New York. London: All have impressive city-wide video surveillance systems. Used to deter crime and to catch and prosecute criminals, these systems are extremely successful endeavors, and cities across the country have looked to them for help planning and developing their own surveillance programs.

Just six years ago, the Atlanta Police Department was one of those cities—crime was up, the number of police officers employed was down and police leadership looked for ways to improve the quality of life for all of Atlanta’s citizens. Their efforts culminated in the formation of Operation Shield, a game-changing force multiplier for the Atlanta PD.

“At the time, we realized that even though we were working toward having more police officers—we had about 1,700 [officers] and we were working our way to 2,000—we realized we would never have enough eyes and ears on the street to create the appropriate police visibility in the city that we would hope to have from a deterrence perspective,” says Dave Wilkinson, President and CEO of the Atlanta Police Foundation (APF).

So officials looked to technology to solve their problem. Organizers first wanted to create a communications network that would connect all the city’s security guards (whose numbers were estimated to be near 15 for every one police officer in the city) to police radio. The result was COMNET, a city-owned radio network through which private security guards could operate and communicate directly with the police department. A text alert network went one step further, notifying both private security and Atlanta police when a major crime or BOLO was issued. But these efforts were relatively easy to achieve. The city’s crowning glory—the Video Integration Center “was the biggest and most difficult part of this plan to build,” Wilkinson says.

A public-private partnership that employs nearly 3,550 CCTV cameras throughout the city, all feeding back to one place, the Video Integration Center (VIC) is a real-time crime center where sworn officers have access to the city’s cameras 24 hours a day. The VIC is similar to other well-known surveillance programs, despite one rather large difference: The way the police department pays—or doesn’t—for the cameras. At present, only about 20% of the total number of cameras in the VIC are owned by the city. It’s a convenient solution to a common budgetary problem.

“There is no way that this city could install, pay for and maintain that many cameras, so [we] look to and partner with the stakeholders in the city and the big businesses that already have their own camera systems, and integrate both the public and private feeds in one place,” says Lt. LeAnne Browning, VIC supervisor.

APD and APF spent two years developing the project and systems. Seed money in the form of a $1.25 million grant from the Department of Homeland Security went to development of the network in the city’s downtown area, and private sector donations filled in the gaps, including $1 million from the Loudermilk Family, for whom the VIC is named.

City-owned cameras in the network record real-time feeds that are integrated into the VIC through Physical Security Integration Management (PSIM) software that allows for disparate video management systems, data points and alarm sensors to feed into one location. Private sector feeds are also transmitted through the PSIM, but are not recorded by APD. This comes at no additional cost to the city, allowing officers in the VIC to have access to any number of cameras, whether they are located on city property or on the outside of the CNN Center in downtown Atlanta. Private entities maintain possession of their video, as well as ownership of the cameras and systems that keep them running. Both installation and maintenance costs for privately-owned cameras are the responsibility of the entities that own them, so the city can avoid budget busters in the future. All APD has to do is watch what happens.

“We do not and cannot monitor all of these cameras [at once], but what’s important is that we have access to those cameras,” Browning says. “Our system is additive to the department. We are a force multiplier for the officers that are out there, so our success stories can be anything from catching quality of life cases [as they occur] to being the eyes and ears for [a public event] downtown. We have helped in various homicide cases, assaults, robberies and, sometimes, through the video footage, we realize that the crime didn’t actually occur the way that somebody said it did, so we are able to unfound the case.”

Officers in the field work with officers in the VIC by sharing information about where the high crime areas are and, in turn, officers in the VIC are able to monitor camera feeds in those same areas on a daily basis. Occasionally, VIC officers will witness a crime as it is being committed and are able to call ground units to that location before a civilian has reported the crime. Using PredPol, an existing predictive policing application, along with the VIC, APD is able to anticipate some crimes.

“We push our crime numbers to PredPol every five minutes and, in turn, they give us eight hours of predictive analytics, which we inject into our PSIM at the VIC,” Browning says. “So the officers that are in the VIC can see the boxes where crime is more likely to occur, and they are able to view the cameras that are in those areas and keep an eye out to hopefully keep crime from happening.”

The applications of the VIC are impressive and growing by the day, but Wilkinson says monitoring video surveillance cameras is not the end goal of the program. He says program organizers hope to create an intuitive monitoring process in which the appropriate cameras are cued up based on reported incidents or “certain triggers.”

Right now, the 9-1-1 call systems have been integrated into to the data at the VIC, so an officer who is sitting in front of three monitors will be viewing two monitors with camera feeds and one monitor on which a rolling ticker of 9-1-1 calls appears. These calls, as well as the cameras in the system, are geo-tagged for location so that an officer will immediately be able to switch views and pull up the four cameras closest to where the 9-1-1 call originated, giving APD immediate situational awareness of the incident. The two closest camera feeds (whether from public or privately owned cameras) are also automatically rewound to show the five minutes of recording before the 9-1-1 call came in.

This is why having sworn personnel behind the monitors in the VIC is key.

“Our officers have been out on the streets; they understand how to answer calls and they know what to look for [and] what is going on and can advise the responding officer via radio what they need to be on the lookout for, and can tell if another unit needs to be dispatched with the responding unit,” Browning says.

In this way, APD is able to begin the investigation process before officers are physically at the scene.

“The analytics in the system are the key to the system,” Wilkinson says. “The term ‘monitoring’ cameras seems to be a fallacy, because nobody can sit there and monitor all these cameras at once. You have to be able to have a system that cues up the appropriate camera view at a particular time [like when a crime has just been reported].”

This piece of the puzzle is important because APD does not record or store any private sector video. Should a crime occur within view of a private entity’s camera feed, officers would still need to go through the proper channels to obtain that footage, and detectives would be sent out to recover it.

In the last year, APD has partnered with Google and Edge360, a company that specializes in public safety technologies for law enforcement, to streamline their analytics. Using Google Maps and Google Search, APD’s program is Search 360—a searchable database that combines APD’s more than 1,000 disparate databases—which is also integrated into the VIC dashboard. Anything from license plates to mug shots to suspect descriptions are now immediately searchable in one place.

“If a suspect description [from a 9-1-1 call] includes a scar on the neck, every case that we have with ‘neck scar’ would pop up [in Search 360],” Wilkinson says. “And this is on the third dashboard in front of the officers in the VIC. We are working on getting all the alarms in the city into this network and, as new buildings are coming on board and coming online, we are bringing all of their surveillance cameras into the system as well.”

So, how has all this technology helped crime rates in Atlanta?

“We have been very successful,” Wilkinson says, noting that the number of police officers employed is now around 2,000. “We have the lowest crime rate since the late ’60s and crime is down another 9% this year, so we have made tremendous progress, tremendous impact and we have a lot of forward momentum to take the next big step in crime prevention.”

Want to Be a Better Leader? Know Your Officers

Taking the Tactical Mindset to School