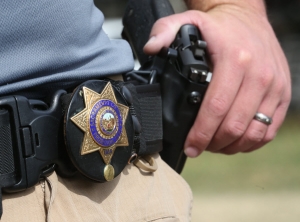 In 1983, the concept’s founder, Salt Lake City PD police firearms instructor Lt. John Tueller (Ret.) set up a drill where he placed a “suspect” armed with an edged weapon 20 or so feet away from an officer with a holstered sidearm. He then directed the armed suspect to run toward the officer in attack mode. The training objective was to determine whether the officer could draw and accurately fire upon the assailant before the suspect stabbed them. After repeating the drill numerous times, Tueller wrote an article wherein he opined that it was entirely possible for a suspect armed with an edged weapon to successfully and fatally engage an officer armed with a handgun within a distance of 21 feet. The “21 Foot Rule” concept was born and soon spread throughout the law enforcement community almost like a virus. It is interesting to note that even Tueller does not know where the term “21 Foot Rule” came from.

Tueller never imagined when he designed his simple firearms training drill that, 30 years later, the 21 Foot Rule would eventually become a police doctrine that is taught and testified to hundreds of times a year. So, is the 21 Foot Rule a forensic fact or a police myth?

If we are dealing with critical issues of officer safety and deadly force, it is important that we seek to arrive at the factual basis of any tactic which some consider to be steadfast dogma to see if it can be forensically defended during training and in court.

It is important to keep in mind that Tueller designed his firearms action-reaction experiment as a training device to assist his officer students in better understanding the concept of the reactionary gap. The reactionary gap is a human factors formula that compares action vs. reaction. In humans, sudden action is usually faster than a defensive response or reaction. In training and in actual high-risk encounters with armed and unarmed subjects, the closer an assailant is to an officer, the less time the officer has to defensively react to any aggressive action the assailant makes.

Information I have researched including actual video interviews with Lt. Tueller indicate that he never designed nor presented his firearms training drill as an organized, outlined and implemented research project involving the applied sciences of psychophysiology, physics and related human factors. No forensic testing, examination, reconciliation of data or scientific oversight of a research model was ever conducted.

During the past 30 years since the 21 Foot Rule has become an informal doctrine within the law enforcement community, I have heard it misstated, misrepresented and bastardized by use of force, firearms and police practices experts from all sides. I actually reviewed the fact pattern of an officer-involved shooting (OIS) case where an officer with a carbine fatally shot/killed a suspect armed with a knife from a distance of more than 150 feet, who attempted to use the “Tueller Drill” as his defense.

Instructors and experts also seem to have forgotten that the original premise of Lt. Tueller’s drill was that his designed circumstance involved an officer with a holstered sidearm drawing and accurately firing his weapon. In the vast majority of officer-involved shootings I have investigated or reviewed, the officer already had his gun not only out of its holster, but either at the “low ready” position or directly aimed at the suspect who was either armed with a knife or was furtively reaching into their waistband.

So what are the real forensic facts that might assist officers with their officer safety and deadly force determinations? Actually, there are no forensically proven facts that I am aware of that specifically verify or conclusively establish that a suspect armed with an edged weapon will, more likely than not, be able to seriously injure or kill an officer armed with a sidearm on all occasions and circumstances. The truth is that the 21 Foot Rule should not be considered to be an absolute rule at all because there are too many variables involved at this point to call it a “rule.” Let’s discuss them.

Psychophysiology
This is the study of how the brain influences and effects physiological function. Science tells us that humans possess both a forebrain and a midbrain. The forebrain is where cognitive processing and decision making takes place. The midbrain plays a role in situational awareness, sleep, arousal, alertness and trained and subconscious memories.

When a human (officer) experiences a threat, it takes, on average, 0.58 second to experience the threat and determine if it is real. It then takes, on average, 0.56–1.0 seconds to make a response decision. In animals, the responses are: fight, flight or freeze. However, humans have five responses: defend (fight), disengage (retreat), posture (yell, point a finger, act aggressive), become hypervigilant (panic, confusion, freezing, using force excessively) and submit (surrender).

When a human is threatened, the brain automatically infuses the body with adrenalin (stimulant), endorphins (pain blockers) and dopamine (euphoric pain blocker).

The body designed these chemicals to help us survive an encounter by making us faster, stronger and more pain tolerant. However, these same chemicals can also significantly diminish our human performance under intense stress by causing such problems as perceptional narrowing (tunnel vision), loss of near vision and auditory occlusion (reduced hearing) or exclusion (loss of hearing), among others. This ultimately negatively affects our chances of surviving a violent encounter.

Under the intense stress normally associated with deadly force threat scenarios and while under the influence of survival chemicals, the body’s basal metabolic rate, measured by heart rate, blood pressure and respiration, climbs significantly in milliseconds. This dynamic can cause further psychophysiological impairments such as vasoconstriction which can impair weapon manipulation, cognitive processing and stress memory recall following an encounter.

Equipment and competency as reaction factors
Several factors effect an officer’s survival against an attacker. For instance, an officer or detective whose sidearm is secured in a Threat Level III holster will certainly have a slower draw to target acquisition time than an officer drawing from a Threat Level I holster. An officer’s experience and competency with their holster system and combat shooting style are also critical human factors in an officer’s ability to draw, move off the line of attack and direct accurate fire upon an armed assailant.

Accuracy of fire at close distances
The average officer in static firearms qualifications (non-timed standing and shooting without moving) can hit the 9–10 rings far more often than not from the five yard line. However, research of actual OIS incidents has shown that officers can only accurately hit their moving assailants 14% of the time in life or death situations from distances of only two to 10 feet. On the other hand, assailants were able to successfully engage and hit officers 68% of the time within those same distances.  So the psychophysiological components of actual gun fighting play a critical role in an officer’s survivability within relatively close distances.

Start shooting to stop shooting: “Perception lag time”
Once the average officer gets on target, it takes them 0.56 seconds to make a decision to commence shooting. However, it then takes that same officer 0.25–0.31/100ths of a second per trigger pull to fire. As the deadly force scenario rapidly evolves, it takes that same officer on average 0.5–0.6 seconds to realize that the threat has passed and to stop shooting.  This is because of a psychophysiological dynamic referred to as “perception action—reaction lag time.” Another question we might ask (and would never know) is whether the officer’s brain processed the threat information serially, or if it was parallely distributed.

The subject of why suspects are found to have entry wounds in their sides and backs when an officer has asserted that the suspect was facing them when they fired is a bi-product of perception action-reaction lag time and the manner in which information was processed by the officer’s brain. This is pretty sophisticated information for a criminal or civil jury to understand and consider.

Adding it all up: Fantasy or forensic fact
The fields of contemporary police practices and applied sciences are rapidly changing methods. Applied science by its nature, supports or rejects hypothesis and theories based upon the reconciliation of scientific statements, facts and evidence. However, law enforcement is more inclined to be archaic and married to non-forensic, speculative dogma that often goes unchallenged, but becomes widely accepted as fact.

It is my opinion that Lt. John Tueller did us all a tremendous service in at least starting a discussion and educating us about action vs. reaction and perception–reaction lag. This has certainly saved many lives within our ranks. However, it is certainly time to move forward with a far more scientific analysis that actually seeks to support or reject this hypothesis.

The question as to whether or not the 21 Foot Rule is an applicable defense in an officer-involved shooting actually depends upon the facts and evidence of every unique and rapidly evolving deadly force encounter. In some circumstances, shooting at similar distances with far more experienced, competent and better equipped officers, within an environment with physical obstructions such as a police vehicle, might be inappropriate. Whereas, with inexperienced officers, wearing a difficult holster system and no obstructions within distances greater than 21 feet might be justified.

As the 1989 precedent use of force/deadly force U.S. Supreme Court ruling in Graham v. Connor (490 U.S. 386, 109 S.Ct) has eloquently stated, each high-risk encounter during a rapidly evolving situation is unique. My sense is that future research may underscore that legal principle with respect to The Tueller Drill.

Be safe out there!

Ron Martinelli, Ph.D., is a nationally renowned forensic criminologist specializing in police death cases, use of force, human factors and psychophysiology. Dr. Martinelli is a retired law enforcement officer who directs the nation’s only multidisciplinary civilian Forensic Death Investigation Team at Martinelli & Associates, Inc. He can be reached at 951-719-1450 and martinelliandassoc.com. His firm is presently engaged in a major forensic scientific project reanalyzing the “21 Foot Rule.” If you are interested in volunteering for this important project, please contact his office.