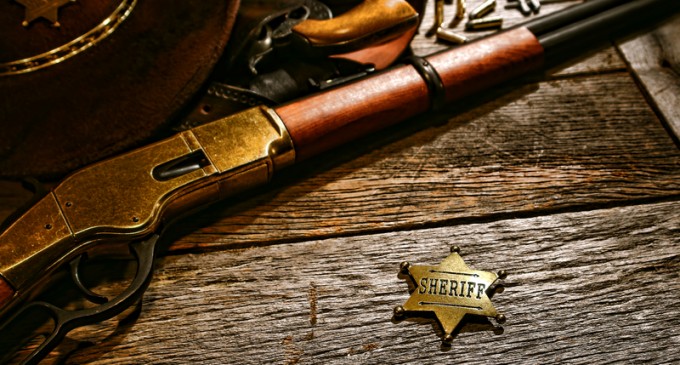 As liberal policies of the federal government continue to cause trouble on the local level for law enforcement and rhetoric from the left chips away at gun ownership while calling for more gun control laws, a growing group of sheriffs are taking a stand.

Known as the Sagebrush Sheriffs, County Sheriffs, particularly from rural towns in Western states, are banding together under the belief that they are the last hope between the overstepping federal government policies and the individual liberties and freedoms of citizens of the United States. According to Richard Mack, the local sheriff can invalidate federal ruling in order to prevent unconstitutional laws.

The Sagebrush movement goes back over 40 years, with beginnings in the 70s when many believed that the Federal Government was using environmental laws to go beyond what should be allowed on federal land. Fast forward over two decades to 1994 and the government again tried to impose new legislation that would require law enforcement agencies on the local level to perform all background checks for guns.

Believing what the government was doing was unconstitutional, Richard Mack, who was the sheriff of Graham County Arizona at the time, and other local law enforcement sued the government and won the ruling in 1997. With this the Supreme Court said that the Federal Government may not force States’ officers to enforce federal regulations.

This was a tipping point for Mack who used the momentum to continue to fight the government and attracting more local sheriffs to his movement. In 2011 Richard Mack officially created the CSPOA—the Constitutional Sheriffs and Police Officers Association—so more sheriffs would find common voices as they stood up against the federal government.

The goal of the CSPOA and the Sagebrush Sheriff movement is to protect America from those that the group believe is doing the most harm: the government itself.

According to CSPOA, the local sheriffs—who are the only law enforcement officers elected by the people—are the ultimate authority of their area and by taking their Oath of Office must “support and defend the Constitution of the United States against all enemies, foreign and domestic”. Under this guidance, Sagebrush Sheriffs assume the authority to nullify the fed if they are trying to implement unconstitutional law.

The belief that local county sheriffs are the ultimate law of the land and not the federal government is not a new belief nor is it only something that the CSPOA believes. The John Birch Society of the 1950s held similar views and modern day groups such as Oath Keepers, states’ rights groups and Second Amendment activists ask for support from local sheriffs to stand up to the government.

The Sagebrush Sheriff movement is not without detractors, obviously, as some such as Casey LeFranc say that the ideology and rhetoric issued by CSPOA and Richard Mack is not based in legal precedent and US Attorney Amanda Marshall has stated that some of the actions by sheriffs to rile up local residents increases civil and federal tension and that the Sagebrush crusade will “increase safety risks” to federal officers and the public.

With over 4,500, including many sheriffs, paying members and growing in the CSPOA, it seems that the stance local sheriffs and law enforcement officers are taking to stand up to the federal government is not going anywhere anytime soon.

Want to Be a Better Leader? Know Your Officers

Taking the Tactical Mindset to School