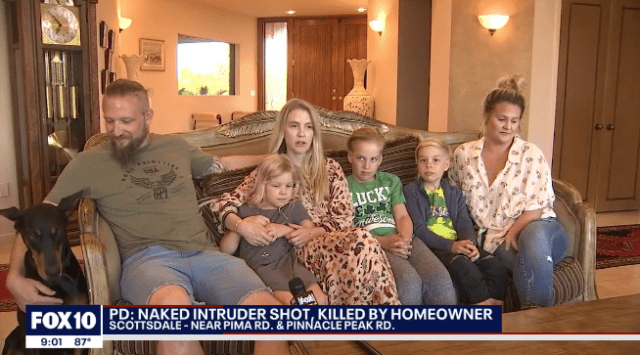 According to Scottsdale police, officers responded to a home near Alma School and Happy Valley Roads for reports of a suspect attempting to break into a home. The homeowner told police he confronted the suspect and ran him off.

However, at 10:53 p.m., police received a call from someone saying that an intruder had been shot nearby at a home near Pima Road and Pinnacle Peak Drive. Officers responded to the home and found a man dead who matched the description of the suspect from the earlier attempted burglary, Fox 10 reported.

Police say their investigation reveals that a 41-year-old man was working on his property when he was alerted by his family’s dog to activity coming from inside his home. Armed with a shotgun, the homeowner entered his child’s room and was confronted by the naked suspect, who was holding a large piece of wood.

The suspect charged at the homeowner and was shot twice.

None of the residents were injured.

On Thursday, a FOX 10 reporter spoke with the homeowner, Aaron LaTowsky.

LaTowsky said his sole responsibility is protecting his wife, three kids, and their nanny, as well as the family dog, Sadie. It was his trustworthy dog that alerted him to the intruder.

“So I came inside, and I saw one of our side doors was open and she was barking down the hall towards my kids’ bedrooms,” said LaTowsky.

The rest of the family was asleep at the time, so LaTowsky grabbed his shotgun.

“We never would have known,” said his wife, Brenda LaTowsky. “We would have continued to sleep and sleep through it. so I’m just so thankful.”

LaTowsky went into his daughter’s room, where he says the suspect came out with a large piece of wood, his face masked and his body naked.

“He basically was lunging at me, so it was very quick,” said the homeowner. “He had his hands in the air. I could see something dark or black coming at me, and again it was very, very close, so I fired almost immediately.”

Two shots killed the suspect, who police believe to be an 18-to-19-year-old man.

The LaTowskys said this was the first time their home has been burglarized, although they are always prepared.

“God Bless America and the Second Amendment,” LaTowsky said. “Glad I was able to protect my family. God bless the police for coming so quick to take care of us.”