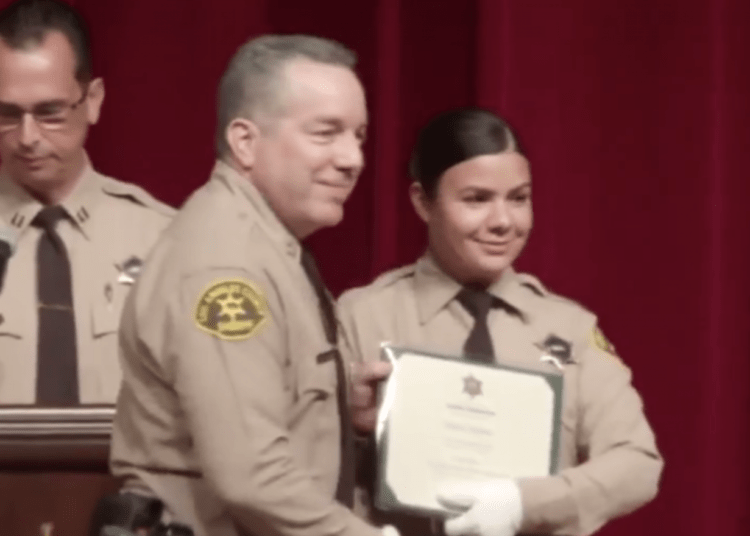 LOS ANGELES — One of the sheriff’s deputies ambushed Saturday night by a brazen gunman previously worked as a librarian before she applied to join the Los Angeles Sheriff’s Department three years ago, according to a reports.

Claudia Apolinar, who is being guarded by fellow members of the sheriff’s department while she and her partner – a 24-year-old deputy – continue to recover, worked as an aide in a Los Angeles Country library starting in 2011. In 2017, she applied to be a sheriff’s deputy, reported Daily Mail.

Apolinar is a 31-year-old mother to a 6-year-old boy. She and her partner were ambushed Saturday night while sitting in their car at a metro center in Compton. As a result, they were rushed to a local hospital in serious condition.

Her father told the Mail she was being protected by a member of LASD who was standing watch at her room.

“To take care of your partner, initiate radio traffic make sure the civilians in the area are safe, it shows a lot about her courage and intestinal fortitude.”

An extended version of the video reviewed by the Los Angeles Times shows the shooter running away in the direction from which he came. He turns a corner out of the frame, past a second figure lingering on the sidewalk, according to the Times.

Moments after the shooting, the passenger door opens and a deputy stumbles out, hand on head, according to the newspaper. The driver-side door opens soon after.

Apolinar was struck multiple times in her face and torso but tended to her partner, who was also wounded after they were able to climb out of the police unit, FOX reported.

“It’s an extreme situation. She was shot in the face, shot in the upper torso several times,” LASD Lt. Brandon Dean told the Mail. “To have the wherewithal to get yourself out of the vehicle and the line of fire in case it continues, but then to take care of your partner, initiate radio traffic make sure the civilians in the area are safe, it shows a lot about her courage and intestinal fortitude.”

In dispatch audio from the moments following the shooting, a weak-sounding voice can be heard saying: “998 Compton Pax,” which is the code to signify a deputy-involved shooting and help is urgently needed. When the dispatcher asks if it just happened, the barely-there voice reportedly responds: “Compton Pax, deputies down. Compton Pax 998.”

A reporter from local affiliate FOX LA shared a graphic image that shows the bloodied female deputy peering out from behind a pillar in the aftermath of the shooting.

NEW: LASD & the families of the two ambushed deputies have given me permission to show this graphic photo of the moment after they were shot. I’m told female deputy was shot through jaw, still radioed for help & applied tourniquet to male deputy’s wounds. Both stable now. @FOXLA pic.twitter.com/6m06qec1v2

According to Los Angeles County Sheriff Alex Villanueva, both deputies underwent surgery after the shooting Saturday evening and were expected to recover. He called it he called “a double miracle,” Law Officer reported.

VIDEO OF DEPUTY APOLINAR GRADUATING FROM THE SHERIFF’S ACADEMY

Speaking with KABC Radio on the John Phillips Show, Villanueva said the reward money reached $175,000 — a combination of donations of $100,000 from the county and $75,000 from two private individuals.

The sheriff issued a challenge to LeBron James, a vocal critic of police procedures, to double the reward money, Law Officer reported.

Investigators described the attacker as a Black man who appears to be between 28 to 30 years old and who was wearing dark clothing at the time of the shooting.

You can now make a donation on the ALADS website https://t.co/0QSwPboLrF on behalf of the two deputies who were ambushed. Or mail or fax in a donation by downloading this form. Thank you for your donation and your support!#ALADS #deputy#LASD#Compton pic.twitter.com/MlYqXtILjZ

Anyone with information is asked to call the Los Angeles County Sheriff’s Department’s Homicide Bureau at (323) 890-5500.