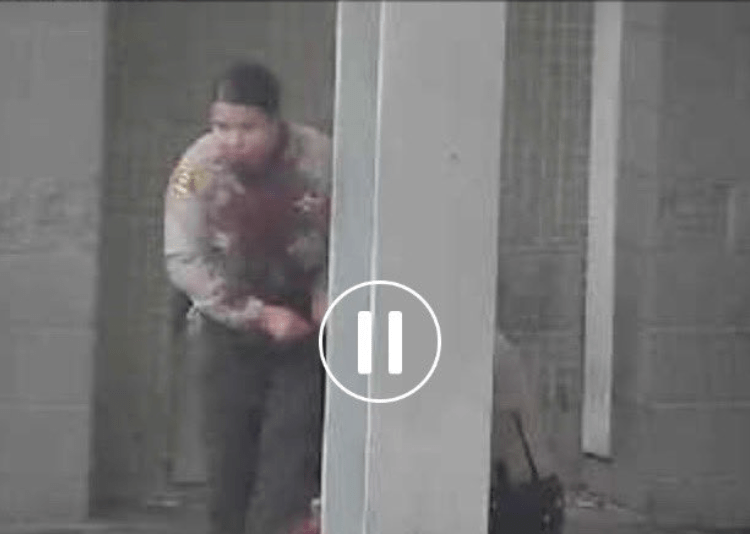 LOS ANGELES — A graphic new photo shows the brutal injuries sustained by one of the deputies ambushed by a gunman in Compton.

The families of the two wounded deputies approved the release of the troubling image, which shows a bloodied female deputy standing after being shot through the jaw, FOXLA correspondent Bill Melugin posted on Twitter.

The male deputy is seen kneeling down behind a column holding out a blood-soaked hand — and a gun is seen on the ground in front of them the New York Post reported.

NEW: LASD & the families of the two ambushed deputies have given me permission to show this graphic photo of the moment after they were shot. I’m told female deputy was shot through jaw, still radioed for help & applied tourniquet to male deputy’s wounds. Both stable now. @FOXLA pic.twitter.com/6m06qec1v2

The deputies — a 31-year-old mother and a 24-year-old man — were shot at close range around 7 p.m. Saturday in Compton. The two were critically injured when a lone gunman walked up and opened fire in a chilling caught-on-video ambush.

Los Angeles County Sheriff Alex Villanueva said both deputies are out of surgery and are expected to survive in what he called “a double miracle.”

The sheriff’s department is offering a $100,000 reward for information leading to the conviction of the unknown gunman.

After the horrific attempted double assassination there were protesters blocking the entrance to the hospital emergency room and yelling, “We f***ing hope they die,” referring to the two deputies, the sheriff’s office said.

UPDATE: The deputy who was shot through the jaw has been identified as Claudia Apolinar. Read more.