This is the result of 'criminal justice reform' 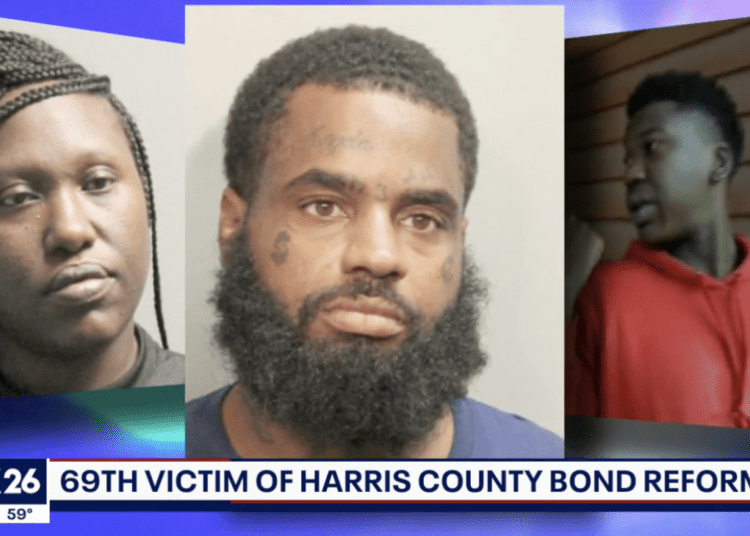 Michael Mosley, center, is wanted for the murder of Larry Lawrence. (Screenshot Fox 26)

HOUSTON – A 61-year-old man is now the 69th person in Harris County to be killed by someone free from jail on multiple felony bonds, Fox 26 Houston reported.

“He was just fun to be around he didn’t bother anybody everyone loved my Uncle,” said Larry Lawrence’s niece Lakisha Lawrence.

“He was a sweet and gentle guy always trying to help,” said Larry Lawrence’s girlfriend Gloria Alexander. “I don’t know how this happened to him.”

On November 19, Lawrence was walking to his job at a local market when three suspects committed a robbery/homicide. In an instant, his life was over.

“The guy plugged him in the back and killed him then walked up on him while he was laying there pulled down his sock went into his sock and took his money,” Alexander said.

One of the three now charged with capital murder and on the run is Michael Mosley, 37, according to Fox 26.

The convicted felon was free from jail on, not 1, not 2, but 3 felony bonds.

The previous bonds should have been revoked when new crimes were committed but the judge continued to set him free, said Andy Kahan with Crime Stoppers.

Judge Hillary Unger of the 248th criminal district court gave Mosley a get out of jail free card.

(Note: This is an example of criminal justice reform, 2020. It is what the BLM movement and white, guilt-ridden liberals have demanded. This is the result; marginalized people getting victimized. Note that each crime featured by Fox 26 was black-on-black crime.)

He and 23-year-old Wilbert Smith also free on multiple bonds are now charged in the murder of 27-year-old Jecory Miles.

“I just think that’s pitiful and sad that they let these people out to harm good people,” Alexander said.

If Judge Unger would have kept Mosley locked up Lawrence’s loved one’s say they would be spending the holidays with him.

“It doesn’t make any sense letting these people out on bond and they commit more crimes,” his niece said.

Fox 26 did not provide a timeframe for the 69 homicides. Judge Unger has not returned multiple requests from the news organization seeking comment.