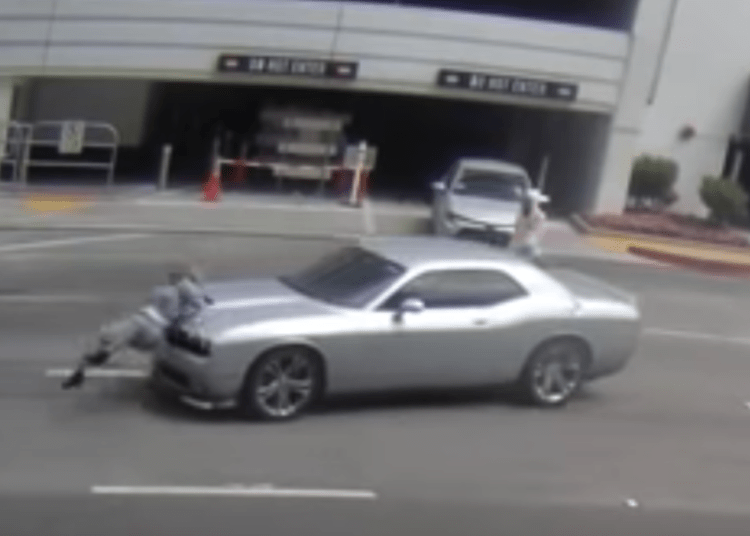 LOS ANGELES – Gut-wrenching video shows the moment two California thieves rammed a woman with a car, propelling her into the air, before jumping out and snatching her watch.

The video, released by the Los Angeles Police Department, shows the frantic victim running on foot into the middle of a 8th Street and Francisco Street in downtown Los Angeles, about noon on April 11, KTLA reported.

Police are searching for the pair of robbers who hit the victim with their car as she tried to flee. LAPD provided the following overview:

On April 11, 2022, around 12:02 p.m., the victim was at a jewelry store in the Jewelry District of Downtown Los Angeles when she was followed by suspects in a silver colored Dodge Challenger. As the victim approached the intersection of 8th Street and Francisco Street, a suspect exited the Dodge Challenger, approached her vehicle, and with an unknown hard tool, shattered her driver side window. The victim attempted to drive away but was unable due to heavy traffic. When her vehicle stopped, the victim exited her vehicle and ran westbound on 8th Street seeking help. The victim attempted to flee on Francisco Street, but the suspects continued to chase her. She returned to 8th Street and ran westbound. At this time, the suspects continued to follow the victim in their vehicle, accelerating and striking the victim as she fled westbound on 8th Street. Once on the ground two suspects emerged from the Dodge Challenger, one armed with a handgun. Victim immediately removed her watch and threw it on the street. The suspects retrieved the watch and drove away.

Amazingly, the victim’s injuries were minor, LAPD said in a news release.

The stunning crime was part of a trend of robberies in Los Angeles that involves violent thieves targeting wealthy victims, then following them to isolated areas or their homes.

LAPD launched a task force in response to the crime trend. They’ve said there are 17 gangs targeting the wealthiest residents in the Southland by robbing them after they leave venues catering to the rich and famous, Law Officer reported.

Police said the robberies are often carried out by crews working from multiple vehicles and that high-end handbags, watches and other items are then sold regionally on a thriving black market.

In a report last week, LAPD said they’ve arrested 24 suspects believed to be responsible for 47 robberies. They’ve also arrested six suspects for attempted murder and another 16 for weapons violations.