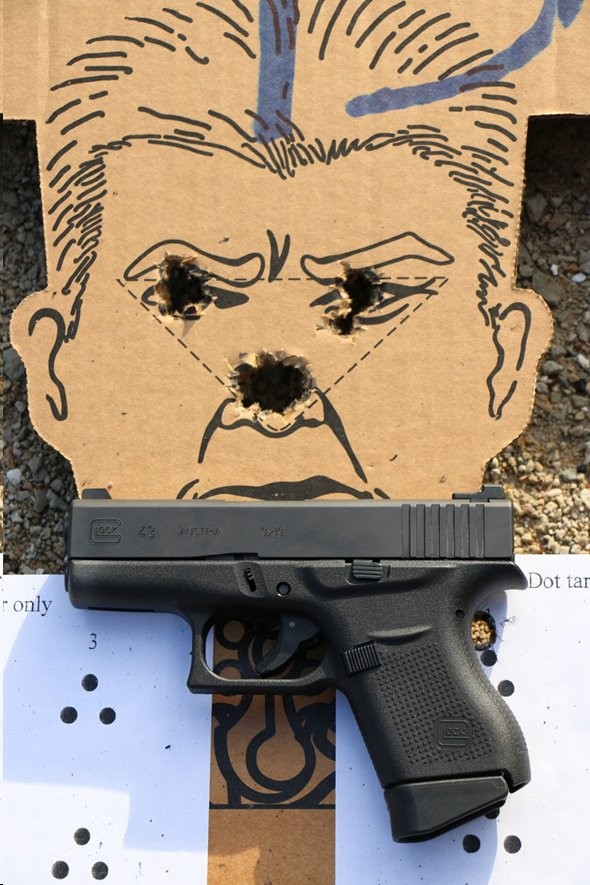 The news that Glock was bringing out a 9mm version of the pocket-sized Glock 42 was not a surprise. Rumors were thick after the 2015 SHOT Show that the new model would be shown in Nashville, Tenn., for the NRA Convention. Reaching out to Glock’s Midwest regional rep. Mark Williamson, I asked if we could purchase two of the 43s to put them through a series of tests.

All good, except the pistols would not be shipped until the third week of April, after NRA. While waiting for their arrival, I contacted Johann Boden at Vista Outdoor to discuss ammunition selection for the short barrel 9mm. As a top shooter with a strong law enforcement and military service background, Johann is one of the most knowledgeable ammo guys in the business. I explained that we wanted to test a variety of 9mm loads and put the 43 to the test for functionality and accuracy. Not long after our discussion, 3,000 rounds of Federal 9 mm ammo arrived. Half was full metal jacket in 115, 124 and 147 grain loadings. The rest was a mix of Federal 115, 124, 124 p, 147 and 147 grain P in JHP, Hydra-Shok and HST duty loads.

Next, we called Heinie Specialty Products to get replacement sights. Dick Heinie produces some of the finest pistol sights, and the ledge model is what I chose for the test of the 42 last year. The plastic factory sights may work, but I want a far more durable set on a pistol that is carried daily and shot often. In the previous test of the .380 42, the Heinie all-steel tritium element Ledge sights were preferred by every officer who test fired the pistol.

Two days post-NRA Show, the pistols arrived from Kieslers Police Supply. On opening the boxes, the 43s looked very close to the 42, as the size difference is truly minimal. How much so? The slide is less than one tenth of an inch wider, slide and barrel length is ¾ inch longer, and grip size just that much larger to allow a 9mm-sized magazine.

A welcome add-on not found with the 42 is one of the two supplied 9mm magazines has a finger extension to allow for a full hand grip on the pistol. The flush bottom mag will not allow most shooters to get their little finger onto the frame.

As we started the test, four shooters loaded 11 of the sixround magazines. The order of the day was to fire a mix of slow and rapid fire exercises. This process allowed the group of shooters to more efficiently test fire the 43s.

The wide array of Federal ammo from 115 to 147 grain bullet weights and standard and plus p (p) velocity allowed for a significant test of both reliability and accuracy. The ammo table below shows the results of chronograph testing. The average of 12 rounds of each type of bullet is indicated.

All bullet weights and types, with the exception of the 147 grain full metal jacket functioned well. The 147 FMJ has a shorter overall length and a flatter end profile than the 115 or 124 grain FMJ. Combined with the very fast slide velocity stripping the round from the magazine, the 147 FMJ round repeatedly nosedived into the forward portion of the magazine and created a feed stoppage.

For practice and training, stick with the 115 and 124 grain FMJ loads. Other than the feed failures of the 147 grain FMJ ammo, function was extremely reliable. As we approached the 800 round mark, one of the hot, dirty and (purposely neglected) 43s failed to go fully into battery with several rounds. We did a fast clean and lube on both pistols and had no further issues. To be fair, no one one I train with treats their handgun this way. We purposely pushed them outside recommended maintenance levels to see what can be expected. Note: a fast run through with a bore snake and a touch of lube will keep your 43 humming.

The Glock 43 is built to be more than a concealed carry handgun that at best is fired occasionally. It handles, shoots and performs like a duty pistol and can be used for a full day of range work and more. With the 43, Glock filled the one slot that was missing in their lineup. For those making their first Glock purchase, better late than never. Law enforcement price is $358 from Glock distributors.

Jeff Chudwin has written for Law Officer since the magazine’s inception. He is the 2009 Law Officer Trainer of the Year and retired chief of police at the Olympia Fields (Ill.) PD. He is the president of the Illinois Tactical Officers’ Association.

Jeff Chudwin is the Law Officer Tactical Ops columnist. He’s also the 2009 Law Officer Trainer of the Year. He retired as chief of police after 38 years of service for the Village of Olympia Fields, Ill. A founding member and current president of the Illinois Tactical Officers Association, Chudwin is a former assistant state’s attorney and has been a firearms, use-of-force and emergency response trainer for more than 25 years.
Tags: FeatureFeaturesHandgunsReviewsSpecial TopicsTactics & Weapons