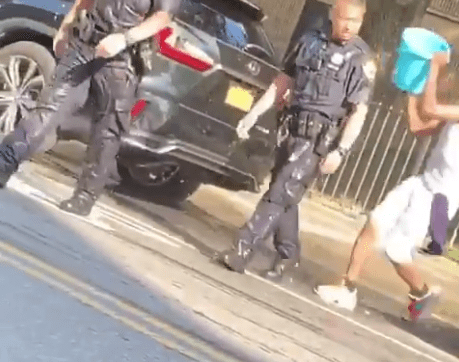 NYPD Officers were drenched with water buckets by an unruly mob. (Twitter)

NEW YORK – Rudy Giuliani pointed the finger squarely at New York City Mayor Bill de Blasio after videos surfaced Monday of people attacking NYPD officers by dousing them with water, saying this “would never happen in a million years when I was mayor of New York City.”

Footage shows separate incidents of people in Harlem and Brooklyn using buckets to splash and dump water over uniformed officers, as the cops calmly walk away. De Blasio condemned the acts as “Completely unacceptable,” and said, “We won’t tolerate this kind of disrespect.” Still, former mayor Giuliani believes the 2020 presidential candidate is part of the problem, Fox News reported.

“This is what happens with knee-jerk disrespect for police. It will only get worse until these Left wing idiots are defeated,” Giuliani tweeted Tuesday morning, saying the current “disrespect for the uniform” is the “result of a Democrat-Progressive (Retrogressive)-Socialist Mayor.”

This disrespect for the uniform in NYC is result of a Democrat-Progressive (Retrogressive)-Socialist Mayor. This is what happens with knee-jerk disrespect for police. It will only get worse until these Left wing idiots are defeated.

Furthermore, the former mayor wasn’t finished blasting the current one. He had even stronger words Monday night on “The Ingraham Angle,” saying de Blasio was “absolutely destroying the quality of life in this city.”

“Disorder controls the streets, and our elected leaders refuse to allow us to take them back.”

While Giuliani was known for reducing the number of people living on the streets of New York, he blasted de Blasio’s administration when dealing with vast increases in homelessness.

“He’s a disgrace, and even Democrats don’t support him and are embarrassed of him,” Giuliani added, perhaps a reference to de Blasio’s low poll numbers as he campaigns for the Democratic presidential nomination. Mayor de Blasio’s office did not immediately respond to Fox News’ request for comment on Giuliani’s remarks.

The former mayor wasn’t the only person sounding off over the public display of disrespect. New York City Police Benevolent Association President Patrick J. Lynch also called out the city’s leadership after the videos went viral.

“Our anti-cop lawmakers have gotten their wish: the NYPD is now frozen. It’s not the fault of these police officers. It’s the end result of the torrent of bad policies and anti-police rhetoric that has been streaming out of City Hall and Albany for years now,” Lynch said in a statement, adding, “Disorder controls the streets, and our elected leaders refuse to allow us to take them back.”

In one of the videos, someone could be seen throwing a bucket at an officer, hitting him in the head, as he appeared to be in the middle of an arrest.

DISRESPECT: This is what #NYPD Officers are faced with today. Petrified to take action. #BlueLivesMatter @NYCMayor @BilldeBlasio @NYPDnews @NYPD73Pct pic.twitter.com/VRpVKBS5Jb

Moreover, Giuliani warned that crime would not decrease as long as officers are in this environment.

“The way you reduce crime is to have police officers with high morale,” he said. “That uniform should be respected.”

NYPD Chief of Department Terence Monahan called the acts “reprehensible” and said officers do “remarkable” work and that the department has their back.

The videos of cops being doused with water and having objects hurled at them as they made an arrest in #Harlem is reprehensible. NYC’s cops & communities have made remarkable progress — together — but EVERY New Yorker MUST show respect for our cops. They deserve nothing less. pic.twitter.com/mPtPPbUSGZ

To NY’s Finest: the work you do every day is remarkable. We trust you to do what is a very difficult job. Use your discretion — make arrests when necessary — and know that you have our support and full confidence. Thank you for what you do day in and day out. Please stay safe. pic.twitter.com/6Px4asur1h

“Use your discretion — make arrests when necessary — and know that you have our support and full confidence,” he said.

Chief of Patrol Rodney Harrison also expressed support for the officers, saying they “have the difficult job of protecting their communities and will not be disrespected while doing so.”

“Although the police department is working on building relationships with the community, there is a line that cannot be crossed,” he said.

Hopefully, those who doused the officers with water will be identified and prosecuted. These actions are beyond unacceptable.