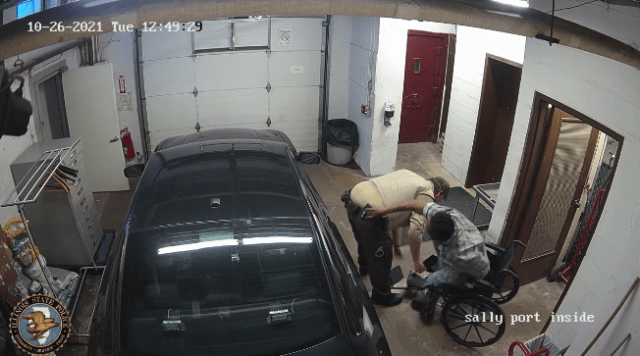 Fredrick Goss wrestles a holstered weapon away from a correctional officer before getting shot by a second officer. (Illinois State Police)

JEFFERSON COUNTY, Ill. — Illinois State Police have released a video that shows an inmate in a wheelchair disarm a correctional officer who was transporting the defendant to court. The suspect is then shot by a second officer who quickly responded to the scene.

Fredrick Goss, 55, was identified as the offender by law enforcement authorities. He is facing trial for armed robbery and exchanging gunfire with police. The gun takeaway from the correctional officer occurred on Oct. 26 in a sally port at the Jefferson County Courthouse in Mt. Vernon, Fox News reported.

A struggle ensued after Fredrick Goss disarmed the correctional officer, according to authorities. (ILLINOIS STATE POLICE )

Video released by ISP shows Goss reaching for the holstered firearm while the officer was adjusting the footrest on his wheelchair.

After seizing control of the weapon, another officer enters the room. He then retreats for cover behind a doorway as Goss turned around and haphazardly aimed the handgun in his direction, the video shows.

According to ISP, the second officer — who saw the crime unfold from a security camera — fired one round at Goss from a barricade position, striking the suspect.

“Goss was transported to an area hospital and eventually transferred to a St. Louis area hospital for treatment of his injuries,” ISP said in a statement.

The crime and subsequent shooting is now being investigated by the Division of Criminal Investigation at ISP and the Jefferson County State’s Attorney’s Office.