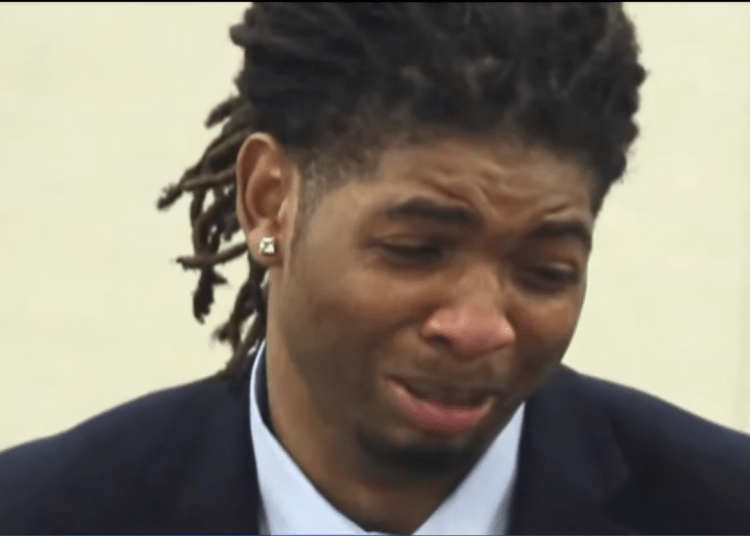 CHRISTIANSBURG, Va. — Virginia Tech football player Isimemen Etute was indicted on second-degree murder charges last year after he was accused of beating a male Tinder date to death after the man portrayed himself as a woman. He was also suspended from the team following his arrest. On Friday he was acquitted of second-degree murder.

Etute, 19, was found not guilty in the 2021 death of Jerry Smith, 40, after his lawyer argued he acted in self-defense, reported The Roanoke Times.

The jury in Christiansburg, Virginia deliberated three hours before submitting their verdict to the court.

After matching with someone named “Angie” on Tinder last April, Etute visited the person to engage in oral sex. The next month, he returned to the victim’s apartment to verify his gender and discovered Smith was posing as “Angie,” Etute said previously.

The linebacker then groped Smith before allegedly beating him to death, a detective testified, according to the New York Post.

Etute took the stand in his own defense earlier this week and said he felt “violated” that his date lied about his gender. The defendant said Smith had insisted they meet in the dark and had reached for what he thought was a gun.

Etute previously told police at the time of his arrest that he punched the sexual partner five times in the face and stomped on him after discovering the person he thought was a woman was actually a man, Law Officer reported last year.

During his trial, Etute testified that he punched Smith five times and kicked him to escape the apartment.

Although Smith did not possess a firearm, detectives located a knife beneath his mattress.

Jimmy Turk, Etute’s defense lawyer, argued that the former football player acted in self-defense. He said Etute’s fear and the victim’s weapon were not considered by investigators.

Prosecutor Patrick Jensen countered the claim of self-defense, saying Smith was in no position to get his knife. Moreover, the 153-pound man was reportedly no physical match for the “elite college athlete” who was listed as 6-foot-3, 205 pounds.

When the verdict was read to the courtroom, Etute’s father, David, collapsed in his seat while his wife Nichelle burst out in tears. Etute lifted Turk off the ground in a big bear hug with both of them weeping. Smith’s family quickly left the room.

Turk later spoke to reporters outside the courthouse, The Roanoke Times reported.

“This is one of the proudest moments I’ve ever had as a lawyer,” he said.

“I’m not in shock because it’s the right verdict, but always wondering and worrying about whether you convinced 12 people,” Turk pointed out “That’s always nerve-wracking. I’m just thankful for this jury. It is the right decision and right now I’m still just overwhelmed.”