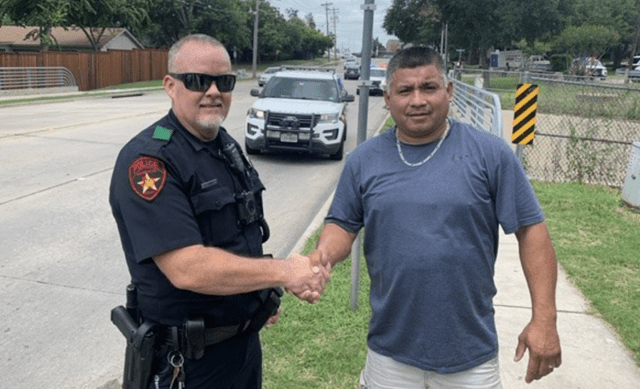 LEWISVILLE, Texas – A police officer in Texas got a suspected criminal off the streets last week thanks to a former rugby player who put an end to a foot chase by literally tackling the man.

The Lewisville Police Department said on Facebook the incident happened on June 22 as Officer Jeff Carey spotted a man rummaging through a vehicle that turned out to be stolen. As Carey got out of his vehicle to approach the man, he started running and got away.

About two hours later, police said Carey spotted the suspect outside a restaurant. As a result, the officer jumped out of his vehicle to take after him on foot.

Michael Barrera, who’d just returned to the restaurant after having breakfast with family when his sister forgot something there, spotted the foot pursuit. The former rugby player told FOX4 the opportunity to help out just presented itself to him.

“I played a lot of rugby in my days, you know, I’m a little older now, I still got little wheels,” Barrera told FOX4. “It’s like a rugby ball, go after it. You know, the game ain’t over ‘til it’s over.”

Carey said as he was chasing the suspect, he spotted a “blur” on his left side, which turned out to be Barrera tackling the suspect.

“As soon as I put the handcuffs on the suspect, my mind goes straight to my vehicle,” Carey said.

As Barrera went after the suspect, his uncle George stood guard over the empty the police cruiser.

“I wouldn’t want nobody to steal something out of my vehicle if I leave the door open, you know, so that was my instinct to stay behind,” he told FOX4.

A third man, who was unnamed, also assisted in helping police catch the suspect.

Authorities said thanks to the help of the three men, they were able to recover a stolen vehicle and arrest the suspect, who was charged with the crimes.

“We believe in community policing and these three men exemplify how working together can help keep our community safe,” the department said. “Thank you for being our other Brothers in Blue and our Green Guardian.”

Barrera told FOX4 that stepping in to help was the least they could do.

“Once they get in that vehicle and start their day, they got our back,” he said. “Lending a hand to any officer is a blessing.”