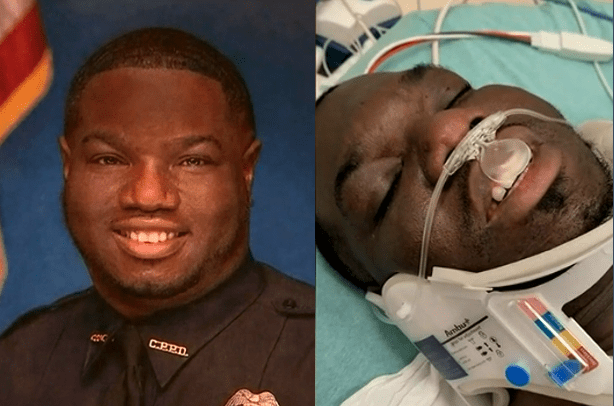 COLLEGE PARK, Ga. — A Georgia police officer who was run over and seriously injured by teens in a stolen vehicle Saturday morning said he made a conscious choice not to reach for his firearm and use lethal force when the SUV drove into him. He said he couldn’t bear the thought of taking a “kid” from his mother.

College Park Police said Officer Ivory Morris’ life was in danger and he had every right to end the threat — but he didn’t, WSB-TV reported. The officer who sustained a broken leg and other unspecified serious injuries is undergoing treatment at Grady Memorial Hospital.

Morris told a WSB-TV reporter that he thought the teen was going to run over him a second time.

“I was looking in that kid[’s] eyes. I was like, ‘I don’t want to hurt this kid.’ I didn’t want to take nobody’s kid away from them,” Morris said.

The encounter began about 1:30 a.m. on Saturday as Morris was working a part-time job. The officer kept receiving alerts from Flock cameras in the area about a stolen Nissan Rogue.

He went to the Hilton Garden Inn at Millenium Center and spotted the stolen automobile there, WSB-TV reported.

As he went to confront the driver, he said he noticed a 15-year-old boy standing near the Nissan, but the vehicle drove away as he approached.

“He was walking away from the car,” Morris said.

He became involved in a struggle with the teen in the parking lot when the stolen automobile returned, the news organization reported.

Police said the teen jumped on the hood of the SUV with Morris still holding him. That’s when the teen screamed for the driver to go.

Police said the 17-year-old driver jerked the wheel of the car, causing Morris and the 15-year-old to fall to the ground.

That’s when Morris said the driver intentionally ran over both of them and sped off.

As a result, not only did Morris receive significant injuries, the 15-year-old did as well.

Morris’ supervisor said the officer had every right to use his service weapon against the 17-year-old driver who hit him with the SUV, the Atlanta Journal-Constitution reported.

Regardless of the legal justification to use lethal force, Morris was apparently willing to sacrifice his safety while making the decision.

“I was thinking, ‘These are somebody’s kids,’” he said.

Under Georgia law, police officers are allowed to use lethal force in circumstances that pose an imminent threat of death or great bodily harm.

Police are still searching for the driver of the stolen Nissan.