The officer has been stabilized after transport to a local hospital 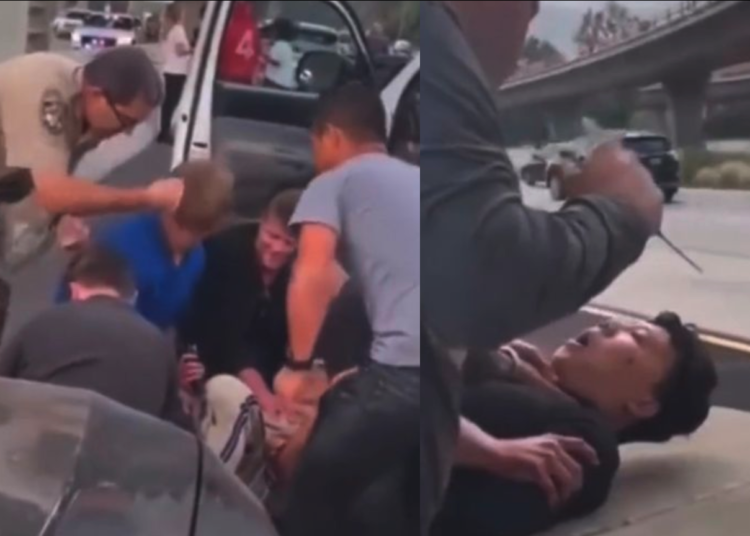 A CHP officer was shot Wednesday evening in San Diego. A group of citizens offered medical aid and captured the gunman. (Twitter)

SAN DIEGO – An officer with the California Highway Patrol was wounded by gunfire on Interstate 8 while investigating a traffic collision Wednesday evening near Mission Valley in San Diego, according to reports.

CHP Captain Michael Harris said the officer “was investigating a traffic collision when he became involved in a struggle with a pedestrian, resulting in a single gunshot,” according to Fox 5 San Diego.

Citizens quickly jumped in to help the downed officer by providing medical aid and courageously subduing the 25-year-old gunman.

A video of the actions taken by Good Samaritans was shared Thursday on social media. A group of men appear to be detaining the suspect at knifepoint while others render aid to the wounded officer. Additional CHP officers arrived on scene within a short period of time, the Post Millennial reported.

GOOD CITIZENS: Bystanders in San Diego detained a man that shot a CHP Trooper and provided aid to the Trooper.pic.twitter.com/MV6YpMEfy3

The injured officer was transported to Scripps Mercy Hospital. He was shot in the right thigh. Officials said he’s been stabilized after suffering a serious gunshot wound.

One man who was tending to the injured officer was heard asking for a tourniquet. It was unclear if the officer’s femoral artery was struck by gunfire.

Capt. Harris said the unnamed suspect is in custody and will be booked on appropriate charges “once they are explored and determined,” according to Fox 5 San Diego.