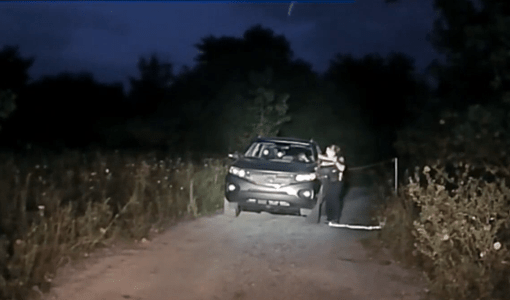 Brianna Tedesco is suing her former police agency saying she was terminated due to PTS. (YouTube)

LAKEMOOR, Ill. – A former officer with the Lakemoor Police Department is suing the agency, saying she was wrongly terminated due to having post-traumatic stress (PTS) following a violent encounter with a murder suspect, who was fatally shot by another officer.

On July 26, 2018 Brianna Tedesco had been patrolling solo at night when she spotted a vehicle parked on a single-lane access road about 40 miles northwest of Chicago. Kenneth Martell was sitting in the driver’s seat of the SUV.

Unbeknownst to Tedesco, the man was wanted for the robbery and murder of an 88-year-old male victim in Pennsylvania earlier that month.

Bodycam and dashcam footage released six months after the encounter showed Tedesco struggling with Martell after he pulled a gun when she asked him for identification during the detention. A second officer arrived on scene and fatally shot the suspect.

Each officer was exonerated in the shooting, but a year after the incident, the department fired Tedesco.

She has now filed a lawsuit against the Lakemoor Police Department, saying she was wrongly terminated due to having PTS, reported CBS Chicago.

Tedesco said she told her police chief she was not ready to work the night shift without a partner since she was suffering from PTS. She also asked for a light duty assignment, but said supervision would not accommodate her, according to the news outlet.

Moreover, the former officer claims she faced harassment and retaliation from fellow officers after she reported her PTS. Tedesco accuses them of telling her to “put on her big girl pants,” and occasionally failing to respond to her calls for backup while she was on patrol.

Law Officer has reached out to to the department for comment.