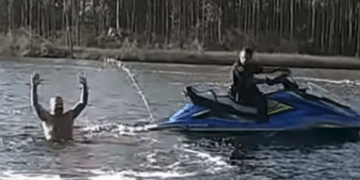 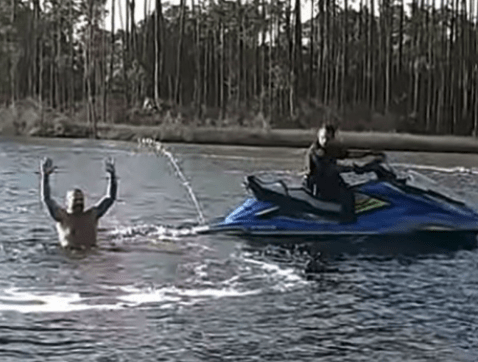 A deputy caught Clyde Merrill Hunter while chasing after the fugitive on a Jet Ski. (Walton County Sheriff's Office)

WALTON COUNTY, Fla. — A Florida deputy’s bodycam recorded his wild pursuit of a wanted fugitive last week that began on foot and ended after a short rundown on a Jet Ski.

Walton County Sheriff’s deputies responded to Miramar Beach on Friday following a tip that Clyde Merrill Hunter was staying at a residence there, the sheriff’s office said in a press release Monday.

Hunter had an active felony warrant from Walton County for grand theft auto. He had just been released from custody on July 23 after recently being charged with several armed and unarmed vehicle burglaries, theft of a firearm, and theft of several motor vehicles.

A deputy caught Clyde Merrill Hunter while chasing after the fugitive on a Jet Ski. (Walton County Sheriff’s Office)

At the residence, deputies said they found numerous stolen tools and vessel registrations to two stolen Waverunners out of Okaloosa County in a bag under Hunter’s clothes. Hunter was then seen fleeing on foot.

Deputies tracked him down to Cessna Park, where he was riding one of the stolen Waverunners. After Hunter got off the personal watercraft and onto the boat ramp, deputies approached him and ordered him to stop.

Hunter bolted and deputies gave chase on foot until the suspect tried to evade capture by jumping in the water and swimming away.

Bodycam video shows the short foot pursuit before a deputy commandeered a nearby Jet Ski and caught up to Hunter, whom he guided back to shore for arrest.

Deputies said a bag on the stolen Jet Ski contained various burglary tools, including bolt cutters, a hammer, a drill, a screwdriver, a drill bit, a pry tool, a pick tool used for ignitions, and a wrench, Fox News reported.