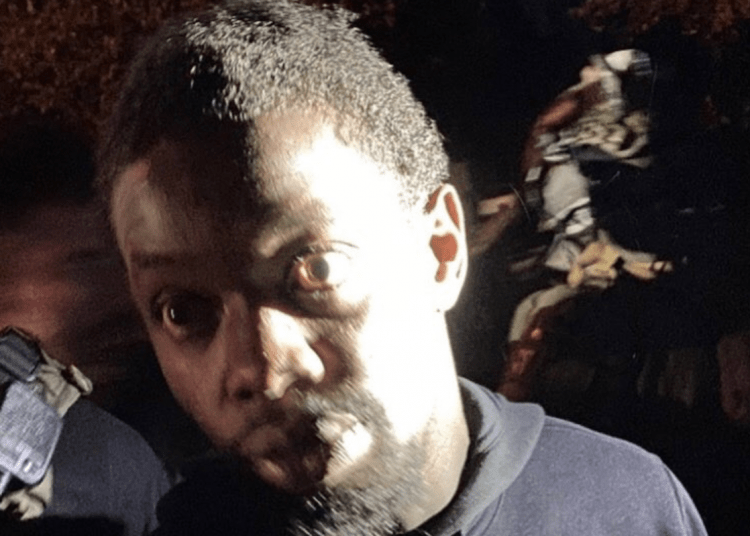 DAYTONA BEACH, Fla. — Daytona Beach Police Officer Jason Raynor was in critical condition after being shot in the head Wednesday. The gunfire took place as the officer was investigating suspicious circumstances about 8:50 p.m. A massive manhunt for the suspect paid off and Othal Toreyane Resheen Wallace has been captured.

Chief Jakari Young tweeted early Saturday that Wallace, 29, known as “O-Zone,” had been captured. At a news conference later Saturday morning, the chief said Wallace had been taken into custody around 2:30 a.m. Saturday while hiding in a treehouse, in a wooded area in DeKalb County, Georgia, east of Atlanta.

Othal Wallace is in custody! Press conference will be held at the police department at 5am.

At the time of his capture, Wallace was found with multiple weapons as well as body armor, the chief said, according to the Daytona Beach News-Journal. The chief also tweeted a photo of Wallace following his arrest.

The property where Wallace was found was owned by militant group NFAC (Not F—ing Around Coalition), the chief said, according to the news outlet.

The suspect’s Facebook page suggested he was linked to the groups NFAC Black Militia, the New Black Panther Party, and the Atlanta chapter of the Huey P. Newton Gun Club, which is named for a founder of the 1960s-era Black Panthers, the News-Journal reported.

Heavy reported that Wallace recently marched with NFAC in Louisville and Tulsa. The report says NFAC is is a black nationalist paramilitary organization that advocates for black liberation and separatism.

In social media posts leading up to Wednesday’s shooting, the suspect identified himself as a part of the New Black Panther Party for Self Defense, Law Officer reported.

Debbie James, a spokeswoman for NFAC Global, claimed Wallace had been terminated from the group in January, Fox News reported.

Another rep from the group claimed it had disbanded.

“It doesn’t even really exist no more,” the NFAC’s Brandon Oliver told WKMG-TV of Orlando. “The NFAC, it’s pretty much over.”

The FBI joined the manhunt searching for Wallace who has a long criminal history that includes aggravated assault with a deadly weapon without intent to kill, trespassing, and resisting an officer, authorities said.

The #FBI in Jacksonville, FL, is assisting the Daytona Beach PD with the search for Othal Toreyane Resheen Wallace, wanted for the attempted murder of a police officer in Daytona Beach, FL, on June 23, 2021, when he allegedly shot the officer in the face: https://t.co/SKruT1Ytjt pic.twitter.com/6RKlArVNk2

Chief Young said that Raynor, 26, was conducting “proactive patrol” due to citizens reporting crime in the area when he encountered Wallace, who was sitting in a 2016 Honda vehicle with a California tag on it.

Police released the bodycam footage that showed the officer approach the suspect in his car, asking him if he lives nearby. The officer asks the suspect to remain in the vehicle as he starts to get out.

“Come on man, don’t do this. Why are you asking me if I live here?” Wallace asks. Next, there is a struggle between the two and the officer is heard shouting, “Stop! Stop, man!” before a shot rings out, Law Officer reported.

The chief described Raynor as an officer with a “heart of gold.” Before serving with Daytona Beach police, Raynor was a member of the Port Orange Police Department from October 2016 to February 2019.

According to the Daytona Beach News-Journal, Raynor has a record of heroic acts during his career. One example occurred in 2018, when he was one of several officers who helped convince a distraught woman not to jump from a bridge.

On Friday, the News-Journal reported that Raynor’s surgery “was fairly successful,” although he continues “fighting for his life.”