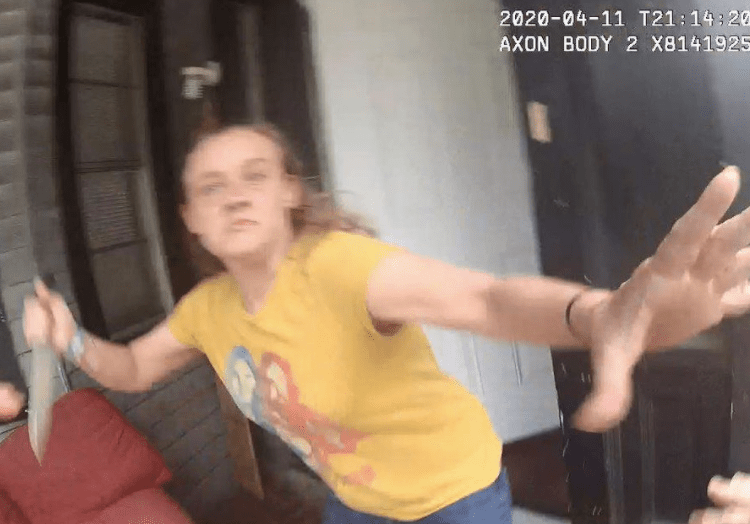 JACKSONVILLE, Fla. — Florida police bodycam video shows a Jacksonville officer knocking on a door before a woman rushes out and stabs her on the arm. The suspect is ultimately shot and killed by responding officers when she repeats the attack.

Officer Elizabeth Mechling was responding to a dispute at a home in April, but the video was just released this week. In it, Mechling knocks on the door, steps back and appears to be waiting for someone to answer.

Then the suspect, identified as Leah Baker, 29, rushes out with a knife, WJXT-TV reported.

“What the f—,” Mechling shouts, stumbling onto the sidewalk.

The knife struck her in the arm, she says later in the video. After calling it in, Mechling orders Baker to drop the knife, and she does. When Mechling orders her to get on the ground, she ignores the command and reaches for the knife again.

The video shows Mechling firing two shots, which both appear to miss Baker.

Baker then stands in place with the knife as Mechling backs away.

At this point, Sgt. J.C. Nobles arrives on scene. He yells for Baker to put the knife down. Mechling begins walking closer to Baker, telling her again to get on the ground.

Baker then reaches down to grab the knife and lunges toward Nobles, who fires four shots. Baker is hit and falls to the ground, but does not let go of the knife. While holding the knife, a third officer approaches Baker, telling her repeatedly to stay down.

Additional officers arrive at the scene, one of whom treats Mechling’s wound, WJXT-TV reported.

While Baker is still on the ground, a police K9 grabs hold of her leg and she begins punching the dog. An officer can be heard yelling “stop hitting my dog,” and then another officer rushes in and gets the knife away from Baker.

The K9 drags Baker a short distance into the street, officers handcuff her and paramedics arrive to treat her. She died at the hospital.

Baker’s mother, Charity Baker, told the WJXT-TV that her daughter had mental illness.

“I can’t condone my daughter’s actions, but at the same time I have fought with different hospitals to get the help she needed,” she said.

Photo of the knife that the suspect possessed. pic.twitter.com/h7F0S9eL3j

After an investigation into the incident, the state’s attorney’s office determined the shooting to be justifiable.