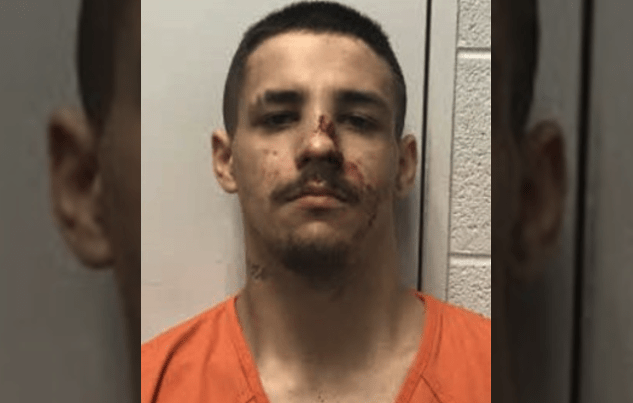 HAYWOOD COUNTY, N.C. — A suspect with outstanding felony warrants tried to flee from police Wednesday night. In the process he drove on the wrong side of the road and was involved in a head-on collision, killing one person and injuring two others, according to a report.

Authorities in Haywood County said deputies attempted a traffic stop on a man identified as Dalton Suttles. They said he had several existing felony warrants. Suttles refused to yield while traveling on Highway 209 and then westbound on Highway 23/74 towards the Haywood-Jackson line, WLOS reported.

Deputies were soon joined by allied agencies in the area. Several minutes into the chase, authorities say Suttles intentionally drove into oncoming traffic and continued driving westbound in the eastbound lanes of US 23/74.

While driving into oncoming traffic, Suttles struck a vehicle in a head-on collision. As a result, a passenger in the victim’s vehicle was killed and two others were injured. The extent of the injuries were not clear.

Suttles was transported to Mission Hospital where he was treated and released. He was subsequently booked at the Haywood County Detention Center and is being held without bond.

“We are deeply saddened by the tragedy that occurred yesterday evening when Mr. Suttles made his choice to intentionally drive the wrong way on a highway which led to the crash that took the life of an innocent person,” Sheriff Greg Christopher said. “Suttles choices have changed the lives of the innocent, their families, and everyone else involved in this incident to include the law enforcement officers and first responders that assisted. Choices like the one Suttles made tear at the very core of our society. If he had complied with the law when requested by law enforcement to stop his vehicle on the shoulder of the road, this tragedy would have been avoided. Our sincere prayers are with the families of the victims. Rest assured, this case will be brought to justice.”

Suttles’ existing charges include two counts of trafficking in methamphetamine, six counts of felony failure to appear, misdemeanor failure to appear and fleeing to elude arrest, according to WLOS. However, more charges are expected due to the vehicular homicide.